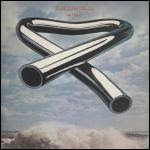 Because the sound system in the Scrobsmobile is a state of the art tape player and radio, (cds weren't invented when they built this car...), I have a lot of pleasure in grabbing a handful of tapes, and playing them when I get fed up with Radio 4.

The latest batch included Mike Oldfield's Tubular Bells. I always like it - loved it even, from the very beginning, and may have mentioned before here, that I stayed up one night in 1973 to watch Melvyn Bragg introduce the music being played live by Mike Oldfield and friends. I was hooked thereafter.

Mrs S gave me a real copy soon after I had failed miserably to get a proper reel-to-reel tape made from a friend's album - well you did didn't you, microphone dangling from the curtain rail, tiptoing everywhere for an hour, no swearing!

On the Sevenoaks bypass yesterday, the whole piece thundered out and contentment was the norm, especially the thought that it was twenty-five years old! What a time; loads of years had gone by since we all listened in awe at one chap playing all those instruments. Even Viv Stanshall sounded quaint!

It took me a long, long time to realise, while mistily musing on the five-and-twenty years time warp, that it was in fact not 25 years but 35 years since we all gasped!

Yes Scroblene, a great album. In my old hippy days, this was my background music to reading Lord of the Rings. I understand Mike Oldfield has now given up on nanny state Britain and moved abroad.

It feels slightly odd too, to write 'last century...' I wonder sometimes if we have a common mindset with the Edwardians.

'The Exorcist' film used the theme and helped M.O. obviously!

I was only discussing Lord of the Rings with Mrs S on Sunday, when we watched the dog perform a bit like a Hobbit. (don't ask)...

Did you ever subscribe to the notion that the Pink Floyd album argument that The Wizard of Oz soundtrack was intertwined when played at the same time? (see Wikipedia).

I don't mind that sort of discussion - it means something to me...

We really have a common mindest with our watches, computers, mobiles, Outlook...etc etc...

We have way over twenty time-pieces in Scrob Turrets, plus one in each car - but mine has busted so it doesn't count; but it does play Ommadawn when I want it to!

I wouldn't mind being an Edwardian, I'm regimented enough. Good post you made.

Fuscia... I really meant intertwined with 'Dark side of the moon' as the Floyd album - but I'm sure you realised...

Time flies at an astonishing rate.

I have got round to buying it, but not listening to it.

I will get there!