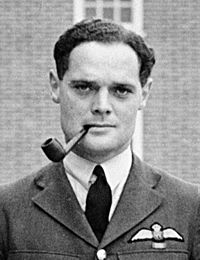 Talking of positions, as we were in the last post, for which I'd like to thank the perpetrators of the three hundred comments, all of which received a reply, and a picture of Scrobs in his rose bower, I was reminded of a small fact.

After Douglas Bader had his awful flying accident and recovered, with the help of De Soutter, to be able to walk and fly again, it was rumoured that one of the reasons that he played golf so well, (after falling over at the forst few shots), was that he had a special left leg made, so that he could make his shots as if he was continually playing uphill!

While my golf skills petered out during the summer of 1968, when an air-shot on the ninth in Tenterden drew exasperation from my playing partner, and a realisation from yours truly, that this was never ever going to be my game, and I'd play better rugby and enjoy beer more, I can well understand the logic of an inch off a leg at the appropriate time!

I had a niggling ache in my hip a few years ago, and the physio found that, like most people, my limbs were anything but level in the standing position...(no, not the Edinburgh one). I was half an inch too few as Peter Cook might have enjoyed saying!

My friend Gordon had a special shoe insert made for the same 'problem', at the vast cost of about £75, while I made my own balancing lift with some strips of leather from an old briefcase, stuck together with double-sided Sellotape, and it cost me zilch!

And I now can't remember why I started this post, so will let you decide the ending, if indeed there ever was one...
Posted by Sen. C.R.O'Blene at 6:38 am 6 comments:

Just recently, Scrobs has been subjected to ‘The Edinburgh Position’.

Now most readers would, quite rightly, and knowing that Scrobs is an ardent admirer of the female form, believe that he has been up to some dering-do with Senora O’Blene, and is just crowing from the rooftop!

Well, this is partly right, but as is usual here, a story goes with it…

Scrobs was passing ‘The Bells’ last week, and as is the usual habit, the whiff of Shep’s Ancient Ales drew him inexplicably in the ever-open door to enquire the time of day, and see who is around.

As a bonus, my good and trusted friend, Elias Sagtrouser and his ever-loving wife were partaking of some liquid refreshment and a few nibbles at the bar, and a bear-like arm stretched out with a huge pint of ‘Old Bastard - 8%’ in a glass mug, and the conversation commenced.

“Scrobs, why is your arm in a sling”? Asked Gloriette, as usual the centre of every red-blooded male eye in the county, and possibly a turning point for chaps who may bat for the other side too…

“Well, my Sweet”, I said, turning towards the beautiful buxomness of a favourite girlfriend, the surgeon at Benenden Hospital decided to lop off a few unwanted bits on my paw, and allow me to start again! He knew it made sense!”

A fragrant arm immediately wound its way around my collar and sling, and while it hurt a little, that was nothing to what it was doing to other parts I can tell you!

My friend Elias knows the score here, and I’m the only bloke who is allowed to get to such an advanced stage in a situation such as this, as the others get a baseball bat across the knees, and a requirement for a new MOT on their van!

“It’s the Edinburgh Position, Gloriette - a procedural dressing to accommodate the comfortable healing of a mitt in a relaxed position”!

Now at this stage, the assembled throng in the bar ceased discussion, and looked our way, so I decided to refer to tactic 3d(section 6), to avert mayhem, because Gloriette usually causes a stir just by appearing at the door.

“Here’s the story, if you must know, and knowing you, you must, and if you don’t I’m going to tell you anyway”, I blurted to the lovely lady, who still hadn’t actually let me go from her scented grasp!

“Many years ago, I worked for a Scottish building firm”, I started. Elias knew this so for once kept quiet, although another pint had appeared at my elbow, and Gloriette had inched a little closer, with her accoutrements firmly pointed in my direction…

“Being Scottish, meant that lots of men and women worked there, and they taught me hugely how to get business, and also make money, besides being tempted by many offers of digression which I had to decline, being happily married an’ that”!

“Now, when I was initially introduced to the directors, the MD, who could kill a grown man just by looking at him from behind the Glasgow Bugle, always dared anyone to show desire for his secretary. She was absolutely gorgeous, and totally charming to us English mortals as well, so at least I had one plus-stamp on my card”! She was also his ever-loving wife...

“My situation was that another director came from Edinburgh, and was as posh as you please, but turned into a fabulous friend within minutes, so I was extremely relieved to have reached 10:00am with both knees intact”.

The situation deteriorated from then on… The induction of new blokes to the firm also included a Welshman - Carwyn.

Carwyn was 6’8”, and weighed 22 stone. He was a kindly, gentle man, albeit oversuited by several yards of twill and straps etc, but otherwise, a really good guy, who claimed the record of 42 pints of beer at one lunchtime with an engineer from Ealing Borough Council!

Back then, in the early eighties, a modern dress style for ladies of a certain age, was to wear transparent blouses with intricate under-apparel in full show. The MD’s wife was renowned for such an appearance, and so was her assistant, Shirl. (Short for Shirley, but who would have wanted to make things short - she was as gorgeous as the MD’s wife)!

So, Dave, (see Scrobs passim) Carwyn and I were hunched over a load of drawings of some big project one day, me being slightly overtired after the early flying cattle-truck from Gatwick to Glasgow, and getting spat at by a lousy taxi driver, and Carwyn was suffering from three Chinese takeaways and eight pints of Guinness, partaken of in his car just before he slept, to take the next day’s business in his stride, while stinking of just about everything…

In walked Shills, and the world stood still…

Shills just bristled with transparency, beautiful shining accoutrements, and a satin-encased wiggle which sent Carwyn into a right spin, which at his size, could well have altered the foundations of the building, and maybe the whole of Paisley!

Shills leant over Dave, and gave him some papers, which he placed to one side after a quick glance at the shimmeringness, then a longer more daring one at Carwyn and me. The lady vanished in a waft of Chanel.

After a small period of self-denial, Carwyn piped up in beautiful ringing Swansea tones “Bloody ‘ell, Mun, that‘s given me a huge stalk”!

The silence was extended to several seconds, to become a very uncomfortable few minutes as both Dave and Shills were from Edinburgh on a pretty regular basis, probably in the very room where we were sitting, and Carwyn had blundered in a bit too fast there…

The said position seemed to permeate quite a lot of the business in the whole office block too. Blimey, a friend up there with me from London once got in the lift, and by the time he’d got to the third floor, he’d propositioned a gorgeous lady from another firm! That evening, a call came out over the Tannoy (remember them), would George please come to meet his guest in Reception!

George looked at all of us in turn, picked up his pint of Heavy, and left us bemused, until we all started to gibber and take bets, mine being a middle of the road three times, while the estimator, a usually cautious man, stuck at one. (The eventual outcome was actually five, and only won by the draughtsman, who had the room next door, and didn’t get a wink of sleep all night either)!

“So, my friends, that’s part of the story, and perhaps one day, when this sling is taken off, I’ll remember a few more details, you know, for the record like…”!

Elias slowly grinned, and I half wondered if perhaps a short break in Scotland’s capital city was on his mind as Gloriette’s gaze returned, so I sank my pint and left them to it!
Posted by Sen. C.R.O'Blene at 6:30 am 14 comments: