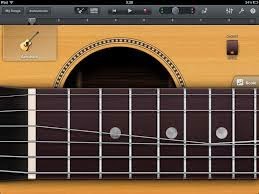 It's been several months since I persuaded myself that I had to get hold of an iPad! Mrs Scroblene had bought one, and now uses it constantly for all sorts of things, especially reading, and the odd mind game, but I had other plans!

People here, who have known Scrobs for the last seven or so years, have often been subjected to several sorts of musical taste, wishes, manufacture even, and also how he dealt with the innovation of computer generated music during the days when money was no object.

There are several iPad apps for music generation, and some are pretty weedy, but others are terrific, and can unleash all sorts of fantasy at the touch of a screen! My favourite is Music Studio, here... 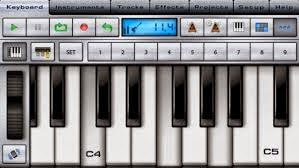 ... and I won't bore you with what it does, other than it costs a few quid, but is marvellous for writing and playing virtually any instrument you care to pick up - but on a keyboard. However, the top pic shows a similar app, Garage Band, which is very common now as it's free, and that has so much to offer as well, but in a different way.

One of the great advantages of the app, is that you can lay down a backing track, with drums, bass rock organ, etc, and then get onto the smart guitar page, and play like you've never played before! I have a certain amount of difficulty holding down a chord on a twelve-string guitar these days, and I don't have an amplifier for the electric ones, so for some time I was bereft of a favoured pastime, although Mrs Scroblene was delighted not to have to listen to a muted strumming while I was oblivious because of my earphones!

The other day, a chum on another blog reminded me that one of the most hallowed guitar solos ever, is David Gilmour's Comfortably numb from 'Pulse - live' which has always been a firm favourite, and it has been played under a myriad of circumstances, so it was no small challenge to write the backing tracks, and try my luck at the solo!

I just have to say, it works, and the big smile just won't go away!

My father was trying to get Dylan Thomas to finish writing Under Milk Wood and he decided the only thing to do was to lock him in the BBC library overnight, pay him by the line and give him an enamel bucket for obvious use
Dame Julia Cleverdon

This was on today, and what a gorgeous lady being taken to task by Kirsty Young!

I was somewhat surprised that the choice of music was unexpected/limited, but what a woman!
Posted by Sen. C.R.O'Blene at 7:15 pm 3 comments:

He was a great entertainer when a younger Scrobs was building a career, and I always liked him, as did my mum and dad, and his attitude. was just so different..

So sorry to see another gem falling from the crown of British comedy.
Posted by Sen. C.R.O'Blene at 7:42 pm 7 comments:

On dismantling a desk...

As of last week, when Scrobs retired, there was a small upheaval in The Turrets, as Mrs Scroblene had long yearned to have the old bedroom back as a proper place for grandchildren to sleep in, and also to see the back of all the stuff I've accumulated over the last dozen years or so.

And she has got her way, as my instructions are to reorganise the various beds and chairs, and this also entailed getting rid of some really derelict stuff. It only took one phone call to realise that some new furniture would be arriving by the end of this week, and that meant that my treasured desk would have to go, or better still be made into something else!

It's amazing what sort of detritus appears if you really look in all the drawers and box files! I've found an old Blackberry sort of phone, which may still work, about three miles of cables and chargers for long-forgotten items, and also about five wallets (one was a 21st present from the folk who lived next door back then), loads of cards from the girls, the cats and the dog, and of course, Mrs Scroblene, as you kinda don't want to lose them do you!

I've found my dad's old army records and medals, some pictures of my mum digging the garden in 1953, and the leather passport case I gave dad when he was globe-trotting! There's a painting YD did about twenty years ago, and she still remembers it too!  And as for photographs, well, my target for scanning everything by Easter has just been threatened as there are all the old black and white ones from years gone by, and they just have to be preserved for future generations - but on disc...

Why on earth I still have my old school reports, I'll never know, but they may well go, as I don't want my great, great grandchildren thinking I was such a pillock all those years ago! But I discovered only recently that one of my school masters back then, was on The Long March from a German prison camp at the end of WW2, and he never even mentioned it. That's what clearing out a desk is all about I guess...
Posted by Sen. C.R.O'Blene at 6:14 am 6 comments: