Politicians on a roll...

The new coalition government has already started to save money by axing unimportant nonentities around Whitehall, who are getting paid for doing very little.

Scrobinterpolizeistazisnoophurt (the investigative and punitive branch of the Turrets Knitting Circle), has found that five ministries have been joined to form a smaller, more accountable administrative group to do the bits that thousands of Nulab wasters were so useless on.

They have screwed together the Culture, Health, Industry, Transport, Sport Ministries to form The Ministry of CHITS, (not to be confused with the grubby little pieces of paper originally used to 'claim' bogus and fraudulent expenses), and which has a new Head.

He is now known as the Head Skate, (borrowed from the old army term for a lazy, incompetent, duplicitous lag, who avoids work at all costs), to remind the citizens of UK Inc, that there used to be millions of these people paid by Nulab to ruin this country at all costs.

Here is the Head Skate arriving for 'work' on his first day, trying to avoid all the rubbish left over from the last thirteen years..
Posted by Sen. C.R.O'Blene at 5:39 am 8 comments:

Lils is generating the heat about making tea with a gas kettle, and as I'm on the second week of a tea diet at present, (times are tough, and Corbieres is only for special occasions until the sodding budget settles people down and gets investors off their arses), I'm going through all the various packs of tea we've accumulated over the years.

This morning, there were packs of Snazzos (JS) 'Be good to someone else's wallet' Ceylon, Twinings Darjeeling, Twinings Ceylon, Twinings English Breakfast, Green Tea for when business Partner comes round at 9.00am, Peppermint 'tea' (hmmm), and all of these in various forms, and in the case of one pack, curious decay...

We did a quick lurk round Tesco today, because it has windows, and I like windows in big stores, because you get a glimpse of freedom once in a while, and on a whim, I grabbed one of the above packs while Mrs S wasn't looking.

And they cost just 28p for 80 teabags, and to be honest, I can't tell the difference yet! We'd been paying five times as much before!

So I'm already even deeper into my addiction, hence the report on Lils' post that I'm up to six bigguns a day and counting...
Posted by Sen. C.R.O'Blene at 8:34 pm 21 comments: 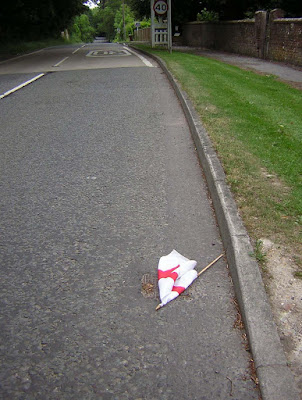 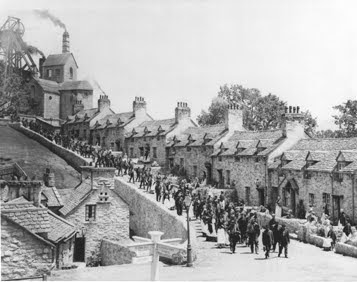 "There is strange to walk in a town. Something is strange in the faces of people who live all their lives in a town. For their lives are full of the clock and their eyes are blind with seeing so many wonders, and they have no pleasure of expectation or prettiness of wish. Good things are heaped in the windows all round them, but their pockets are empty, and thus they suffer in their minds, for where they would own, now they must wish, and wishes denied soon turn to a lust that shows itself in the face. Too much to see, day after day, and too much noise for peace, and too little time in a round of the clock to sit by themselves, and think".

Richard Llewellyn wrote 'How green was my valley' in 1939, and like me, was English born, but spent some time in Wales.

I read this only a few years ago, and at that time I was heavily involved in retail developments, some of which were in Cardiff. I love the narrow Arcades there, and although they were probably not the safest places to visit back then, it is not difficult to let the imagination run wild.

The passage above just jumped out of the pages, and I even copied it and stuck it up on the wall in my office, because it still encapsulates street life today.
Posted by Sen. C.R.O'Blene at 6:58 am 6 comments:

As Lils, who is probably the funniest commenter here has explained; there are serious gaps in Microsoft's ability to retain sympathy from normal people.

The 'Cricket Bat Syndrome' was first identified during a 1920's three day match between Kent and Somerset, when the bowler, Mr J. De B'Serk, actully bowled a delivery which, after nearly taking off the left ear of Umpire Encrarsent (don't ask) Noggins, followed a vertical - then curiously parabolical route for several cubits before descending directly on the stumps of the unfortunately short sighted batsman, Mr A. Tuscers of Millard.

The result was a tie, as A.G.Macdonnell was going to record. (This happened just before his famous description of his famous village match, but in the ensuing melee, he lost most of his notes, and was escorted from the premises by Sergeant C. Onstable, with various pints of Old and Mild emanating from various orifices in his country-woven smock).

But of course, Mr William Gates, as is his wont, has captured the gist of the incident and introduced it as a 'file error' message on all his damned computer software.

Lilith, in her infinite wisdom, has requested a solution, and by virtue of this post, I'm sure that there will be several hundred responses, (many from over-excited chaps who may know/wish to know the lovely lady, [Editor's Note - just P*** off, you know it makes sense]), to alleviate the situation, and restore her computer to its original composure.

There's a distinct possibility that I will have to moderate comments if anyone gets out of line here!

You have been warned!

Raedwald mentioned here that cheaper wine was great for chucking around when it didn't matter, but this proves that the Gates Empire does actually understand these matters, and clearly wants to appease the man!

Congratulations are due I think... 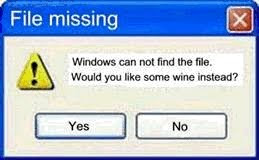 Update: - ED has decided that this is nowhere near strong enough, and has suggested the following amendment!