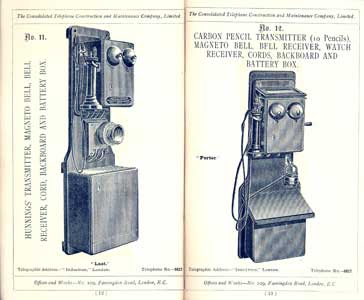 As I work from home, enjoying the occasional company of Mrs S and JRT during the day, Elder Daught’s bedroom has become an office, or better described as a room where I keep about five miles of cabling from old computers, 200 cassettes, piles of pencils, loads of files, this PC, and a telephone.

No, at the moment I have five here right in front of me, on the desk, blinking, beeping, occasionally ringing even! It’s bloody crazy! One landline is our home number, the other landline is for work, there is an Internet handset which works with the Hub, and at the moment, I’ve got two mobiles as I’m changing providers. To add to that, Mrs S also has a cellphone, and we’ve still got a very old mobile which is the size of a brick…

SEVEN BLASTED PHONES IN ONE HOUSE, and there’s only two of us!

My old chum, who used to work for BT, retired when he was 50, with an eye-watering pension and plenty of time to see the world. Staring at all this communication stuff, and knowing who’s paying for it, makes me wonder if I’m actually alive, maybe a solipsist, or perhaps just a bloody fool because I didn’t spot the enormous money to be made from communications all those years ago...
Posted by Sen. C.R.O'Blene at 6:54 am 21 comments: 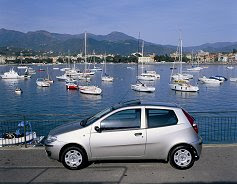 You couldn’t make it up!
I’m now the High Priest of Puntoism! Yup; I’m in charge of everything Supercharged Testosteronito Fiat Puntos do from now on…!
You see, Mrs S has recently been complaining about her shopping bags being nibbled by mice – the bags are all kept in the Punto boot, to save buggering about when she goes to Sainsburys. Wise move, as she is very careful about shopping bags in case the bottles get broken, or the wine boxes become misshapen. Apart from the invasion of the mice, (which caused a major upset in the ‘Turrets’, as I had to find the nasty blue stuff to see them off), the windows had both stopped again, and so had the electric key. Down to me to sort it out…
Fiat have an evil person based somewhere in Italy, who designs the special tools and plastic shapes to hold them in, somewhere round the spare wheel, where mice might congregate, making plans for the night. He is an utter bastard! I spent half an hour trying to get the spare wheel back in, and broke the plastic ‘Da Vinci code’ wheel retainer puzzle in the process. So that went in the bin.
Mrs S stormed off to the woods with JRT, and I fumed in the rear part of the car, saying f*** and b***** b******, and f*** several times again. It really was getting to me – and it’s such a nice day!
The poison was laid in two of those flower pot trays, so that would see off the rodents; and, I got in and turned the key to get the s** going again, by now shrieking profanities in Italian, French and Welsh. Yelling ‘Now you B******’, and punching the driver’s door with a left hook, the window started working perfectly, and leaning over, still screaming inanely, and delivering a backward left hook, the passenger door window did the same!
Two squirts of WD40 later, and Mrs S now has Methane Powered Rodent-Free working model of a Fiat-Ferrari-Maserati Punto, with a small dent where I punched it a bit too hard, and a dead mouse somewhere between here and Hastings…
Posted by Sen. C.R.O'Blene at 3:12 pm 17 comments:

Barnsley Bill has a hilarious post here, http://barnsleybill.blogspot.com/2008/01/give-it-to-me-straight-doc.html which, apart from causing me to laugh uncontrollably at 6.00am, made me wonder about the meaning of life even more!

Now, I’m not the sort of bloke who really minds this sort of behaviour; live and let live is my motto, but this story was a real eye-opener!
A few weeks ago, an old chum returned from a lengthy business trip, and it was obvious that he had partaken of several portions of good living, in fact, he’d done the lot – several times over, and with some pretty dubious people.
On his return, he began to feel pretty poorly, and went to see his Doctor. After a long examination, and a few searching questions, the doc told him to sit down and listen carefully.
‘From what you’ve told me, and having had a good look around’, said the Doc, ‘in my opinion, you have acquired a serious case of ‘GASH’.’
‘Hellfire,’ said my chum, squirming in his chair, ‘that sounds pretty bad; what is it’?
‘It’s short for Gonneroids, Anerobic Syphillides and Herpestilence’, said his Doctor.
‘Hmmmmm, nasty, is there any cure’? Said my worried chum.
‘Yup’; said his Doctor, ‘you need to be kept in complete isolation for a year, and you have to be fed on crisp bread and thin cheese slices’.
‘The isolation I can understand’, said my chum, ‘but why the special diet’?
‘Because it’s the only food we can slide under the door’, said the Doctor ;0)
Posted by Sen. C.R.O'Blene at 6:10 am 3 comments: 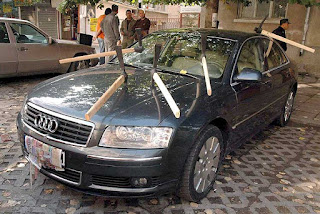 I know Asda are getting stroppy about parking, (answer really is; don't shop there), but look what happens when you park outside Bucket and Sagtrouser, Builders Merchants to the Gentry...

I try and keep 'politics' off my site, but this is really getting me excercised at the moment.

He's supposed to be in charge of work and pensions, and we get this...

So, both he and his boss have totally wrecked my pension, at my expense, and also the aspirations of my friends as well.

Just wait until Brown goes into hiding again; then Hain will be up for grabs, and it couldn't happen to a nicer bloke...
Posted by Sen. C.R.O'Blene at 6:01 pm 8 comments:

Lilith uncovers ‘The Origin of Scroblene’.

Thanks to Lilith, I have been found out! She has trawled through thousands of posts, compared notes, listened to clues and come up with the right answer!

You are magnificent Lilith, and worthy of a huge mention for your tenacity, ingenuity, suspicion, sensavumer, and a rather nice looking sideboard in your living room!

So here’s the boring bit…

Some years ago, we used to do the long drive from Kent to Georgeham and Croyde in North Devon, for a couple of weeks hols. The girls were in their early teens then, and as is usual with most families getting excited, we were always mucking about in the car to alleviate the boredom. We’d all sing silly songs, make up jokes and laugh at anything which took our fancy. This is common with lots of families, and sometimes we actually still do it… (I must apologise here to the man in an old Datsun on the roundabout near Barnstaple; I was out of order calling you that…)!

The Aussie soap, Neighbours had just started, and Mrs S and the girls would watch avidly. I always ‘harrumphed’ away in the background as usual, and was always doing something else, but they took no notice anyway!

Now, I like Australians. It all started when I shared a flat with an ever-changing group in the late sixties. We lived near ‘Kangaroo Valley’, (Earls Court), and they were happy days. Once, I actually heard one chum say to another ‘You tubing tonight Sod’? (Translation – ‘Do you fancy a pint of beer this evening Roger’?) Their terms of friendship, jokes and general good nature was endearing, and very funny to others as well! They worked mostly in advertising, were great company, and we always seemed to be laughing at something or other. (That was also the first time that I ever heard the term ‘punch a grogan’ as well, but don’t go there just now…)!

So, fast-forward to a few years ago. Kylie Minogue was the star of Neighbours, and she and Jason Donovan and all the other cast seemed to have the ‘newer modern’ names such as Charlene etc. Half way through one of our journeys, and feeling slightly manic by now, we started making up totally unrealistic and unpronounceable names for the whole cast, and I was in full swing, but the one that stuck turned out to be – wait for it…”Scroblene”! Younger Daught immediately responded with an equally stupid name for the boyfriend “Eccerone”! God knows where that one came from! Elder Daught was called ‘Bruce’, for months after as well!

So there you have it! The name has stuck, but what is so funny about all this is that I didn’t realise who ‘Scroblene’ was in the play until YD patiently explained it to me in an email only a few months ago! I’d always used it as a generic term for anything I could ‘Father Bear’ at! I’m glad it is Kylie though, because if I had half the spirit she has shown recently, I’d be a much better man.
Posted by Sen. C.R.O'Blene at 6:02 am 38 comments: