So they're all getting it together again then... I wonder if they'll start marrying each other again as well!

Good luck to them anyway; some of them are worth £100 million, so it'll make a nice change to hear them instead of the mindless dross like rap, grunge etc', which is so crap!

As someone said on the wireless this morning, he'd never ever bought an Abba record, but knew all the songs! Amen to that, and we didn't mind a bit either
Posted by Sen. C.R.O'Blene at 12:27 pm 7 comments:

Legs and lights off... 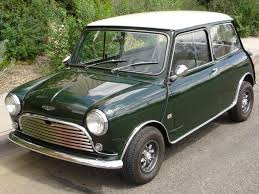 Quite a few years ago, before Her Ultimate Fragrancy the Senora Chiara Robertine O'Blene deigned to be my loving wife, she had a green Austin Mini.

It was a great little car, the doors opened with one of those cords, and I think there were three switches and a speedometer on the dashboard and little else. You started it with a tiny key, and from then on everything seemed to work.

Miss O'Blene (as she was then) would sometimes pick me up from Etchingham station, from where we'd dash to my parents' house, grab a sandwich, then start a round of all the pubs - because that's what you did on a Friday, Saturday and a Sunday.

Now, the legs bit first. This was in the early seventies, when short dresses and skirts were all the rage. Miss O'Blene has fabulous legs, so was able to show these off at most opportunities. Changing gear meant an inch or more to see from the corner of my eye, and I was delighted of course!

But one thing happened with the Austin Minis back then. Whenever you drove through a puddle, all the electrics packed up! The lights went out, the engine stopped and there was nothing to show you up on the road! Her Mini often did this in Whitbread Lane, near here, and it was a frightening experience. Although I was never with her at the time, it might have been even more exciting with all the lights off, and everything damp...

Anyway, it was a common fault with these cars, and was sorted out in later years, such that we bought three more Minis. The first one was a Clubman which went like a rocket. I made a profit on that after a year or so. The second one I bought with £350.00 from an Access cashpoint, and the first thing I did when I got it home was put my hand straight through the wing and right onto the front tyre, so that meant a bit of fibreglass and a spray can. The old door was replaced with a scrapyard one for a fiver, and looked like new!

We p/exed that one when I noticed some shiny metal underneath, and it definitely shouldn't have been there. It smelt too, but was a great workhorse.

So all in all, what with legs that made being a passenger so much more fun, especially in the hot summer evenings, and lights going off at the wrong moment, life couldn't have been more varied back then...

I first went to live and work in London in 1969. I shared a flat in Ealing with an old schoolfriend for a while, then met up with another crowd, on the edge of Chelsea including lots of great Aussies.

Never for one moment did I regret the good times there, although I became fed up with the job, but that's another story. The pubs were great places, especially on Sundays, when I even played rugby for The Scarsdale Tavern with a monstrous hangover from far too many pints the night before...

Later, my various work was centred on London, and I usually drove the sixty-odd miles there and back on a daily basis, as the companies provided a decent car, and I was nearly always on the road!

Since I retired three years ago, I think I've been back once, to help a chum out with some work, and it really isn't the same any more. Successive liberal-left policies have strangled the place in my opinion, and when you consider the insane stance from maniacs like Ken Livingstone in the seventies, and now that silly little guy, Khan, it's much nicer to say 'no' to anything on offer in our once-proud capital city. Blood pressure remains normal, and I breathe fresh air all day!

It's becoming a badge of success that I don't ever have to add to the income of any shop or firm up there, and travel remains purely local with a happy Senora O'Blene in a small VW Golf, a small dog, and an electric bike.

So well done, London liberal-lefties, you can keep your benefit scroungers and serial stabbers, I don't need you any more!
Posted by Sen. C.R.O'Blene at 12:36 pm 17 comments: