So it's Morris Dancing is it?

Plenty of flashing legs, beer and a good warm up...

Here's my favourite, especially when at around 1.50, a lovely cultured voice yelps 'Sorry'...

Pretty damned complicated this one methinks... 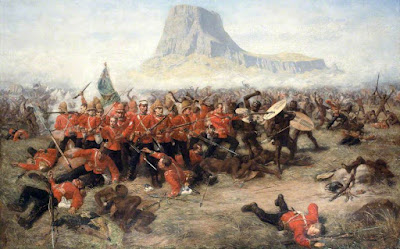 And all this on the day before Michael Caine walked his horse across a stream for another bundle at Rorkes Drift. Jack Hawkins was getting ready to shriek at everyone and the cook was starting to boil up the soup, before being told to put out the fires with it.

There was uproar in the council chamber of Sodden Prickney Parish Council, when it was revealed that an outrageous pamphlet about Alderman Sid Trumpet was to be published in The Sodden Prickney Bugle and had certain allegations mentioned on pages three, nine, twenty and twenty-seven.

The pamplet, entitled 'Fit and furry', was described by Ms Edwina Baggage, who is bicycling correspondent for The Bugle and quite happy doing it, (we know - Ed) as 'a travesty of innuendo and opprobrium'!

As nobody in the room understood a word of what she was going on about, the confusion was further compounded, when Count Basil Kalashnikov started his usual tirade at all and sundry, by rushing around the room, knocking over chairs and tables, waving his arms and yelling 'Sod everything', then collapsing close to the fragrant knee of Ms Cynthia Molestrangler, who is no stranger to such antics, as she often does the same thing herself!

Mr Norman Wibble piped up that it was well known that the main source of the verbal, slanderous attack in 'Fat and fruity', was none other than a discredited whale-meat purveyor, Ivor Bunion, who once used to share a room with Alderman Sid Trumpet, until he became better known as Mr Chairman.

So as the general confusion reached a crescendo not unlike that in 'Lohengrin', or 'Tannhauser', maybe even Wagnerian, (get on with it - Ed), it was noted that Miss Amelia Newt had disappeared from the room! This was duly minuted by the Secretary, a new face on the Committee, Madame St Mont-Shemel, a French import from Brittany. Why she bothered to write it down is a mystery, as Miss Newt immediately returned, dragging her one-time lifelong squeeze, Cllr Ron Groat, who often had his tea and crumpet with Ms Newt, by his scarf, and led him whimpering to the red faces of the committee, where she began to beat him senseless with a large golfing umbrella, and proclaimed him as the source of the fake news.

As nobody actually knew what the news was, because nobody had actually read 'Fifty and flighty', they wondered briefly what all the fuss was about, and moved on to the next item on the agenda, the replacement knob on the door of the gents.
Posted by Sen. C.R.O'Blene at 6:21 am 13 comments: