Scrobs and the accountant's daughter...

A few years before her Fragrancy, the Lady Mrs Scrobs appeared on the horizon, and she was still some way off with chums and other blokes,  Scrobs had started to develop a close friendship with a family, with whom he spent many happy hours watching rugby, visiting pubs, drinking pints of beer and generally enjoying life in the middle nineteen-sixties


These friends were all larger than life characters, and Mr D had two daughters, one of whom began to accept and reciprocate the shine of a young, yelping Scrobs. All this didn’t go unnoticed by Mr and Mrs D, and the whole scenario was starting to look quite interesting for all.


Mr D was a senior partner in an accountants in Chancery Lane and drove a huge Bentley. They all lived in an enormous house in one of the nicer, leafier districts of Hastings (oh yes, there are some, but you have to know where they are), and we had many a day of jollity, most of which was endearingly funded by Mr D, because he was a generous man, and liked to see people getting on in life, and likewise his wife.


Scrobs was living in a flat (and relative poverty), in London at the time, and returned home each weekend to see these friends and of course, several others. On one occasion, during the week, when I was looking at a lettuce or something for supper, Mr D, with a twinkle in his eye, suggested that we go out for a few beers in London, because he had an early meeting the next day, and was staying up that night.


Of course, Scrobs agreed, and on arrival at Chancery Lane, (‘Ask for the Law Courts, you’ll find us halfway up on the left’, were the instructions). From there we repaired to ‘The Red Lion’ (‘we’ll just go in here for a couple of pints, and then we’ll go to the Spanish Club in Cavendish Square; dinner’s on me tonight’), for what turned out to be five pints of Bass and a crack at the sixpenny fruit machine!


The evening wore on and dinner was great fun, because everyone seemed to know Mr D, and he seemed to know everyone as well. I remember a sweet course of a candied orange... Which was a good thing, as Scrobs realised in the realms of Rioja, that he was being ‘vetted’ as a suitor for the particular shining daughter! There was much more jollity, and about half-nine, a huge handshake and a big thank you, followed by a somewhat varied route back to the flat, where I can still remember seeing one of my flatmates, and telling her that I’d just had a splendid evening, and she laughed and said it looked like it!


It is an abiding memory Mr D, and I still recall just about everything we discussed and laughed about, and I’m sorry the mutual shine didn’t happen, but glad that the various daughters went on and made a success in life, and I hope you all carried on to a ripe old age as well.


And why the reference to The London School of Useful Idiots? Well, the pub was at the end of Red Lion Street, off High Holborn, where in the sixties, the LSE had a noisy presence and were all regarded as a crowd of empty-headed wasters, easily ignored by real people who actually created the wealth they spurned so much. So no change there.

I've noticed that I haven't posted anything for two weeks.

This is a travesty of opprobrium, and, mortified as I must feel, I can't think what to say!

As Winston Churchill (or was it Harold Macmillan) once said, 'Oh bugger, I can't remember', so be it thus that this is a fill-in until I can summon enough of whatever I use to complete a post, and - er - that's it...

Alice and the lumps...

Back about 1970, soon after Christmas, I caught a bout of mumps. I was twenty-three then, and at that age it's not really a good idea to acquire this little issue...

My flatmate had got it first, just before the party season, and he came off pretty bad because of the complications which mean that the old system gets attacked from all angles if you're not careful! He just went out on the razzle, and told me later that 'they turned black'... 'Nuff said!

So of course, because we shared the same flat, etc, I was bound to get the lumps on the neck and sure enough they arrived with a sickening prospect. In those days, family doctors actually made house visits, and my doctor confirmed that I was in for a few days of unpleasantness, but if I was careful, and didn't move around any more than I had to, I should be alright. We even discussed whether I could watch the Barbarians rugby match that day, and he thought it would be a risk, so I missed that.

I suppose most kids get mumps early on, but I was terrified of the potential consequences, and stayed immobile in bed at home, looked after by doting parents. To say immobile is an understatement. I can remember lying still for the whole of each day, just getting up for necessities, but eating was jolly painful and so was drinking - especially sharp things, so life wasn't a bowl of cherries.

My dear mum collected a load of books for me to read, and one of these was 'A town like Alice', by Nevil Shute. I read the whole book, cover to cover, in one day, and was totally immersed in such fabulous writing. I'm sure reading such a gripping story made me feel better at the time too - something about others being worse off I suppose!

I ordered it from our library recently, and a brand new copy arrived after some time - surprisingly, but in brand new condition, so I wonder if they can get these reprints of classics done as a matter of course - I'll ask them!

I started it late last evening, and within seconds was totally hooked again, just as I was all those years ago! It's an incredible story and as I'm a slower reader now, it'll be a couple of days this time, but at some stage of reading it again last night, I just considered a quick peep under the clothes to make sure that - er - the extremities were still unaffected...
Posted by Sen. C.R.O'Blene at 7:03 am 30 comments: 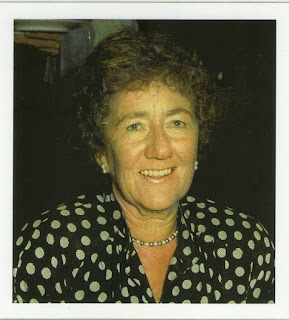 One of my loveliest chums in our village was gently sent off yesterday.

I'd known her for many years as she always cut a swath though the village with her handsome living and presence, her gorgeous affection for fast cars, love and friendship, and a wave at everyone!

I'd usually see her on the way back from the allotment on a Sunday, me being all sweaty and dirty, she in her rorty car and we'd chat for ages. We remembered days when I sold her concrete for her husband's building company, and my own business partner used their firm to build developments all over the Tunbridge Wells area.

Sheila was a fabulous woman. I want to replay the music that we heard yesterday during her send-off, because it was played here by someone about her age, and made Scrobs try and find a handkerchief without much success...