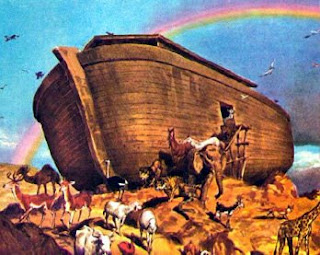 In the year 2008 the Lord came unto Noah, who was now living in England, and said:
'Once again, the earth has become wicked and over-populated, and I see the end of all flesh before me. Build another Ark and save two of every living thing along with a few good humans.'
He gave Noah the CAD drawings, saying: 'You have 6 months to build the Ark before I will start the unending rain for 40 days and 40 nights.'
Six months later, the Lord looked down and saw Noah weeping in his yard, but no Ark.
'Noah!' He roared, 'I'm about to start the rain! Where is the Ark ?'
'Forgive me, Lord,' begged Noah, 'but things have changed. I needed Building Regulations Approval and I've been arguing with the Fire Brigade about the need for a sprinkler system.
My neighbours claim that I should have obtained planning permission for building the Ark in my garden because it is development of the site, even though in my view it is a temporary structure. We had to then go to appeal to the Secretary of State for a decision.
Then the Department of Transport demanded a bond be posted for the future costs of moving power lines and other overhead obstructions to clear the passage for the Ark 's move to the sea. I told them that the sea would be coming to us, but they would hear nothing of it.
Getting the wood was another problem. All the decent trees have Tree Preservation Orders on them and we live in a Site of Special Scientific Interest set up in order to protect the spotted owl. I tried to convince the environmentalists that I needed the wood to save the owls - but no go!
When I started gathering the animals, the RSPCA sued me. They insisted that I was confining wild animals against their will. They argued the accommodation was too restrictive, and it was cruel and inhumane to put so many animals in a confined space.
Then the County Council, the Environment Agency and the Rivers Authority ruled that I couldn't build the Ark until they'd conducted an environmental impact study on your proposed flood.
I'm still trying to resolve a complaint with the Equal Opportunities Commission on how many disabled carpenters I'm supposed to hire for my building team. The trades unions say I can't use my sons. They insist I have to hire only accredited workers with Ark-building experience.
To make matters worse, Customs and Excise seized all my assets, claiming I'm trying to leave the country illegally with endangered species. So, forgive me, Lord, but it would take at least 10 years for me to finish this Ark. '
Suddenly the skies cleared, the sun began to shine, and a rainbow stretched across the sky. Noah looked up in wonder and asked, 'You mean you're not going to destroy the world?'
'No,' said the Lord. 'The British government beat me to it.'
Posted by Sen. C.R.O'Blene at 10:26 am 9 comments: 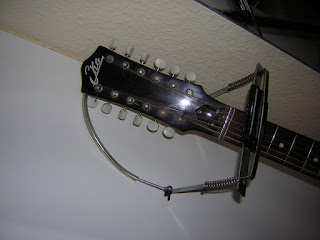 Elecs has done it again with his marvellous guitar post, so here are a few additions for budding late middle-aged rockers and that could include Tuscs, but he’s too young…

The above picture is of the sort of kit I would take to various pubs etc, where we would do the usual folky stuff, filthy rugby songs and tear-jerkers like ‘The lonesome death of Hattie Carroll’ (Bob Dylan).

One night, in a pub near here, I was with some chums, and we went back to one of their houses to carry on the festivities normally associated with Saturday nights. On walking in the door, I casually asked the host, ‘Where’s the twelve-string then Dave?’ not having a clue if he even had one or not.

To my eternal surprise, he immediately said, ‘Through there chum, but it’s only got six strings working, as I can’t do twelve…’. And so it was. We got going with more of the usual stuff, and about midnight, he asked me what I thought of the guitar. Obviously I said it was great, as in the sixties, twelve-strings were still a bit of a luxury to penniless trainees like me, they cost a fortune and although it was only fitted with six strings, it had a great sound.

To my absolute joy and amazement, he then said; ‘You have it then – if you’ll give me your old six string’! Just like that!

It was like having a birthday and Christmas all rolled into one, and I jumped at the chance; asking him several times if he really meant it, as we had been on the sauce more than somewhat… Again, he came out with the sort of statement which left me speechless ‘I always thought I’d give it to *M* as he can use it better than me’!

And that’s a true story, about a chum who displayed such generosity that I could never really repay him, but; he was happy, I was totally over the moon, and you see the Eko twelve string in the above photo, still loved and played occasionally, and with a brace and harmonica sometimes used when Mrs S is about five miles up the road, so she doesn’t have to hear it…

I’ve long since lost touch with Dave, and probably won’t ever see him again (this was nearly forty years ago), but I hope someone else gets this guitar the same way, because twelve strings are quite hard to hold down when you're a late middle-aged rocker...

The world's your oyster... 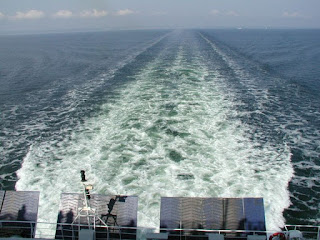 Trubes has started all this – and while in a certain frame of mind, I asked myself a question.

“What is your iconic memory of the sixties’.

(Bit silly putting it like that, I mean, “Hi Scrobs, what’s your abiding memory of the sixties…?” “Don’t be daft, you were there with me remember”! “Oh yeah so we were…”)

Mine is probably the picture above.

Many, many years ago, in a prep school not far from here, we all played a game - especially in summer - which was played on the huge lawn in front of the school.

The game was called ‘Hot Rice’, and I’ve never seen it played anywhere else, or even read about it. Google comes up with a sort of politically correct piss-pot Nulab variation, but we all played the real thing!

These are some of the rules: -

1) Three lads, (or lasses, but they weren’t invented then; except when Matron, or better still, Assistant Matron, joined in...), stood in line, about ten yards apart.

2) One lad chucked a tennis ball at the middle boy, who had a ‘bat’, more like a hockey stick without the hock – just a long lump of wood really.

3) Middle lad had to defend his area below the belt by whacking the ball as hard as he could. If he was caught (two hands, full toss, one hand, first bounce), he was out. If the ball hit his sub-belt regions, he was also out, and possibly whimpering if the ball encroached into a tender adolescent area...

4) All three took turns to be batter, and the ball was sent to middle lad alternatively from each end, usually as hard as possible, to exact pain, and hopefully, shrieks of anxiety. If the batter missed three chucks, he was out and had to give the bat to one of the others.

5) Other rules stated that once the batter had clouted the ball about fifty yards away, he could run towards the thrower, who had to stop in his tracks.

6) The three players had to stay in line, or get thumped or harangued by the others – even the two chuckers kept to the rules, and mayhem was apparent, but controlled by the rules.

7) There were other rules, but these are best forgotten...maybe?

The basic game was magic; simple, and above all, requiring friendship and a common need to ‘play the game’.