Over the recent years, Scrobs has hankered after a three-wheel car!

The interest started in the 1990s when I went to an OB's event and a chum had renovated a Morgan 3 wheeler to immaculate condition. I'd often researched the mechanical attributes of a chain-driven rear wheel, which was an appreciation of all the power from the for'ard engine going straight to one source of traction on the road surface, and making such a direct and forceful connection for a relatively small engine.

Some years ago, The Daily Telegraph ran an article on a gentleman by the name of Bob Curl. Bob had been a 'driving force' in car design and manufacture in his earlier years. and if you have a subscription, it's here!

One small line jumped out, as I realised I knew exactly where he was making these cars, as it was my home village a few miles from here! After little thought, I sent off an email to the DT, expecting very little, but a short while after, the phone rang, and there was the great man chatting away to a very bewildered Scrobs!The car was still in its early stages, and a recent fall-out with Piaggio meant that he wouldn't be able to acquire the 200cc engines he wanted for his design! Of course, I didn't have the wherewithal to help fund anything like this, as...

We had a lovely long chat and Bob even offered me a drive, but I was still in two minds, but because it didn't seem right that I should swanee all over the county while we were nearly penniless, due to the disastrous Gordon Brown policies of ruining our country, I sadly had to pass up the offer.
I read recently that he is seeking ways to make the Dolphin concept car an electric machine, and THAT  would be a huge boost to a great-looking car! And then I WILL take him up on his offer, as I can just get there and back on my electric bike...
More info below by 'Maxmatic' ... 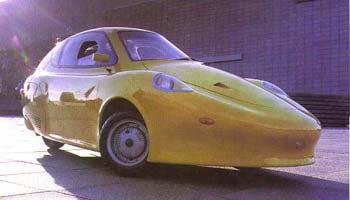 Andrew G. of Newcastle Upon Tyne sent me notice of this interesting trike, along with the text of an article from the February 2000 edition of CAR Magazine introducing it. (See below.) Google doesn't find anything on it anymore. Woe.

Title: STUDLY DUCKING [Nope, I don't understand that either]

Sub-title: You'll raise smiles rather than scowls with the Dolphin, a
105mpg car that won't hold up traffic.

>From the front it looks like something you'd find chocolate buttons inside
on Easter Sunday (that eye-searing yellow, incidentally, is the same paint
code used for Ferraris and TVRs). But take a look at that profile. It's
streamlined, like a Spitfire canopy grafted onto a Fiat Barchetta, or even
a Porsche that someone left on an element.

It's the Dolphin and it does 105mpg and 65mpg. Okay, it's often hard to
know how seriously to take these enviro-hero cars. Usually it's quite safe
to deposit them in the wicker rare-groove file. Aside from its quite sporty
looks, however, the Dolphin has a real design pedigree. It's the work of
Bob Curl, who - together with McLaren F1 mastermind and CAR columnist
Gordon Murray - was responsible for the 1992 Rocket (150mph and 35mpg).
Curl has also designed F3 and Le Mans cars - the 1982 Dome car and 1978 I
Bec entrant - and all Lord Hesketh's Formula One cars between 1973 and
1978.

Nine years ago, Curl started thinking about what advantages the streamlined
technology used for racing cars could bring to a fuel-efficient personal
transport vehicle, and how to pitch it so it would sell. 'The secret of
these sorts of cars is that you have to want to get into them to have a
go,' Curl says. 'And, once you're in and driving it, you shouldn't feel
like you're holding people up.'

The former was the reason behind the striking blue interior. It actually
seats two, with the rear passenger's legs going either side of the driver's
seat. It IS attractive and, weighing 215kg, quite quick enough with its
200cc two-stroke Piaggio scooter engine. The steering is pin-sharp and even
the four-speed manual gearbox is enjoyable slotty. There's no reverse, but
Curl says that would be corrected for production versions.

It's a lot of fun to drive, and the one-wheeled rear end is surprisingly
stable, although it'll entertain with a bit of speed up and some lock on.

(...and apologies for the formatting, there's only so much an ageing Scrobs can do to get the colours right - it's bad enough working in the dark in black and white...)!

As chums here know, Senora O'Blene and I very rarely watch any live television, especially the awful BBC, and we haven't been 'swayed' by any adverts on the other channels either!

Comedy seems just about dead nowadays, with reliance on government-bashing, 'wet' ideas, weak, unfunny, rude delivery and general acceptance of bad manners and needless violence, so our shelves of DVDs have doubled in the last year!

The latest collection is the whole set of 'Dad's Army', with the original cast of course, and we started at the beginning, which is in black and white! The humour is still as fresh today as it was all those years ago! Last evening's showing was 'The armoured might of Lance Corporal Jones', and the scene of Jonesy with Private Walker, in the butcher's freezer discussing petrol coupons, caused total loss of vision and aching sides from absolute joy at the hugely funny excerpt, which is at around 10.50 on this clip!

Most citizens here will have watched this at some stage, but the short piece is still as hilarious now as it always was!

(Many thanks to Daily Motion for this clip  - may more people subscribe)!

It's almost exactly sixty years since this song was so popular!
A young Scrobs was heading west to a new school, already homesick, and this song kept coming on the wireless about now...
I found myself whistling the tune the other day, and didn't put two and two together for a while so I suppose it's the combination of a little more daylight, daffodils, fresher air and the possibility of all this covid stuff nearing its end, which reminds me of back then!
I didn't know that Bobby Darin was only thirty-seven when he died; he was a fabulous singer, and seeing his notes, a superb instrumentalist as well! One of his backing band was Roger McGuinn, who founded The Byrds, who are another band I doted on in later years!

...and here's another I was sent earlier!