Yesterday, while I was outside doing a bit of wood chopping, the church bells behind us were doing their bits, and all was frosty peace with the world - broken by the odd curse when the blade missed...

As Dennis (and probably Bunty) knows, I used to do a bit of bell ringing, and although I've let it all go for several years now, it's always good to hear them clattering away, especially as the timing means that I can pour a large Gordons exactly one hour and forty minutes later!

When I was a lad, one of the most played 78s in the Elder Scrobs mansion, was 'The Three Bells', by 'Les Compagnons de la chanson'. There were several versions made over the years, including a dire copy by some group in the seventies which thankfully has vanished without trace.

At the witching hour, I just mentioned the song to Mrs S, and we wondered if there was a copy on the net. It took just a few seconds to turn up several versions, and whether it was the large tincture, or the cold, I don't know, but this version (the original), just sent shivers down my spine; I love it.

In fact, this recording is the same as the one I have in the attic, with 'That lucky old sun' on the reverse, just enjoy...
Posted by Sen. C.R.O'Blene at 6:15 am 13 comments:

"Not if I have anything to do with it", said the lampshade... 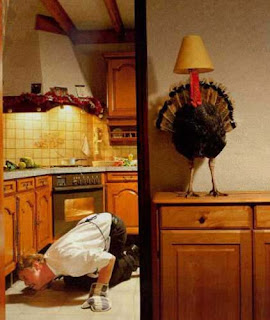 As I couldn't get the hilarious 'Welsh Christmas Song' to upload (Google says it is far too disgusting and contains words of a rude and socially unappealing nature), I've been lucky to receive this last resort from a chum in Ireland - and I'm very grateful...

As I always went to sleep in Leonard Cohen's songs when they first came out, this is a particularly honest post for me!

A chum spent at least a large-glass-time yesterday, explaining how the thin, squeaky Alexandra Burke version was going to make Sony several squillion splonders, because it was on a silly programme called 'The X Files', or 'Max Factor' (is that why Elizabeth Ardened...?), and forced me to download Jeff Buckley's version at bottle point.

So I had to check the 'Factory Grate' version out first, and indeed, it is truly awful! But the version below (link), is much better than both of them, I can assure you!

This morning, the BBC announced with their usual grinning attitude, that '...even councils in the UK are feeling the credit squeeze'!

"Good"! I yelled! "That's bloody good news for once"! I thought then, after yet another night of mental turmoil, working out how we're all going to beat this squeeze. "About bloody time they trimmed their staff, let a few of the lazier people go, cap the huge town hall pension schemes, get the sods to do a few hours more for free..."

Not a bit of it! What the article really meant, was that families who can no longer afford private education are having to take their kids away and place them in local education, and the local services are having to work ever so, really, really hard to deal with the 'Problem'.

The Daily Mail reported on Wednesday, that while the wealth-creating poulation suffers immeasurable harm, the public sector increased it's numbers by 14,000, and that's just since September!

So, this disgraceful public sector influx of 'Private Education Refugee Kids Subordinates' (PERKS), 'Posh People's Siblings' (PPS's) and 'Simpler Minds Under Gordon' (SMUGS), will continue unabated, no doubt paid for with money being printed as we speak.
Posted by Sen. C.R.O'Blene at 8:00 am 4 comments:

At about the same time that our holly was being nicked, there was a similar situation occurring in a township more than a few miles from here...

Well, Jabez and his common-law oppo, Garthro, were out to do a bit of pilfering, and saw this specimen Gazunder tree, just begging to be taken away and ground down to make pegs and stuff!

Garthro's nicked winch wasn't powerful enough, all the hangers-on were speaking an unusual dialect and being generally lazy and unhelpful, so Jabez put the van in gear... 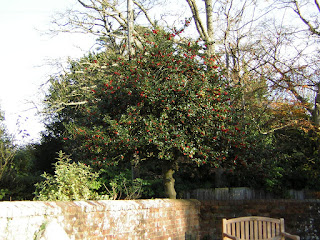 At the entrance to The Turrets, we have a holly tree; it’s not a particularly big tree, and was really quite a small guy when we moved here ages ago. But we like it, and over the years, it’s had various indignities imposed on it, like me running into it with various Scrobmobiles, having a misunderstood Agapanthus tied to it to keep the flower heads from attacking Mrs S’s Fiat Pork Cajun when she sallies forth, near total annihilation by a JCB when the drains were reinstalled, and so on.

Hollies are great when they have loads of berries too. Last year we had only three, but this year it’s smothered, such that some of the boughs are drooping and attempting to attack various passers-by by spearing them and generally becoming unruly. One particular branch takes no prisoners over six foot, so Elbey would stand no chance! Hellfire, he’d lose both shoulder blades as well, and that’s even after his reduction of ¼ inch at the hands of his local choppery! Lils would look nice on a swing though, so that makes it even doesn’t it?

So my job this weekend is to make sure that all offending woodwork is cut back, and a few bits are strewn around for the blackbirds. We usually have a resident thrush living there too. ‘Thready’ the thrush can be a violent bird, (whoever heard of a bird called ‘Freddy the frush’...), and has been known to see off several pigeons, an eagle once, and also three feral buzzards which tried to take over the manor and brought in local trug basket for their spoils. That tree has been the scene of more Avian Territorial Pecking since Grace Jones slapped Russell Harty live on TV! Thready has a rumoured stash of AK 47s in his nest, so you can understand that we tend to keep clear at this time of year.

Now, hollies need a lot of work to keep their shape. At the first ‘Turrets’, I cut one back so hard, that it re-grew to look exactly like (the late) Noel Redding in his heyday, but didn’t play bass half as well – in fact it was pretty hopeless on the second riff in 'Hey Joe'! One year, Mrs S pointed out that that our current tree was in danger of entwining the overhead lines, and either plunging the county into darkness, or sabotaging the local vicarage’s telephone wires. (Personally, I’d rather see the vicarage people suffer, as they aren’t anything to do with the church any more as the house was sold off to pay for a new roof or something, but it would be fun to see all those candles in all the houses again, it takes me back to the last depression – or even last week when all the power crashed and stopped us getting anything out of the fridge; but it was OK, as we had some nice Claret instead).

The day after Mrs S pronounced a severe topping of Thready’s haunts, there was a screech of brakes and a whiff of cheap diesel outside, and a rather weasley man poked his head over the wall, and asked if he could take some sprigs to make wreaths for Christmas. It suited me as I wouldn’t have to climb the ladder and get speared, personally connected to broadband or even electrocuted, and told him he could take the top four feet, on condition that he dropped off a wreath for us. Well of course, pikeys just take everything and scamper off, so we made our own wreath, which was much better, and had some smart additions like berries; (it was another bad year for Thready).

Well, I now have a free hour or so this weekend, as someone (probably the same weazle), has conveniently hacked of the offending branch while we weren’t at home – and I’m delighted. The tree looks perfect now!

I don’t know what I’m going to do with the time saved, probably I’ll spend it writing this for several good friends and relations and trying to make them chuckle a bit...
Posted by Sen. C.R.O'Blene at 6:16 am 15 comments:

An ounce of Pork Scratchings?

In the time it takes to read this, and if you wanted to be more circumspect, you would also get 30p of expenses, or perks, or even porks, if you were Mr and Mrs Ed Balls.

Also, the good people of Haringey (who pay that is), are giving the failed Baby P's tormentors the same amount.
Posted by Sen. C.R.O'Blene at 2:11 pm 6 comments: