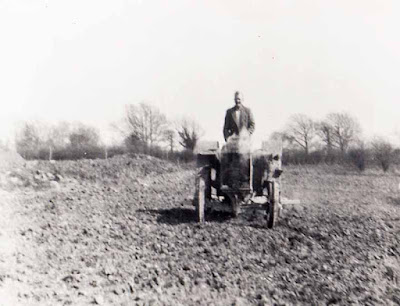 A carpenter was giving evidence about an accident he had witnessed.

The lawyer for the defendant was trying to discredit him and asked him how far away he was from the accident.

The carpenter replied, "Twenty-seven feet, six and one half inches."

"What? How come you are so sure of that distance?" asked the lawyer.

"Well, I knew sooner or later some idiot would ask me, so I measured it!" replied the carpenter. 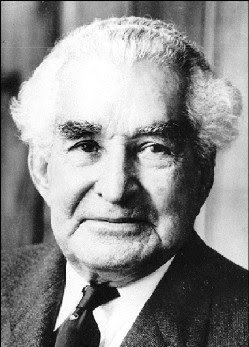 At a time when it seems that UK inc is chucking money round the world like a man with no arms, and with little regard for it's own citizens, it might be a good idea to recall a singular act of kindness towards us, which occurred many years ago.

Lynmouth was ravaged by a huge flood on August 15th, 1952, and in straightened times, was international headline news of a huge tragedy to this delightful little town.

The events are well documented, and I well knew Charles Dobbie, the Consulting Engineer who was on holiday there at the time, and provided unique expertise to the council in bringing the place back to near-normal.

During the aftermath, and at the start of the reconstruction, there was a visit to the town by a certain Mr William Bustamente, who was then a Chief Minister in Jamaica. The Caribbean had experienced a devastating hurricane a year before, and Jamaica had taken the brunt of the storm.

Mr Bustamente arrived in person, and came down to Lynton to express his sorrow and regret, and wanted to reciprocate the largesse of a cash-strapped UK, by bringing with him a lorry load of bananas, sugar and coffee from his own country, which he happily distributed to everyone in the crowd - especially the children. 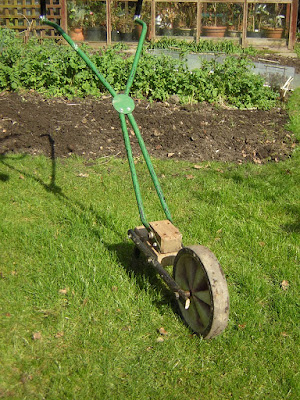 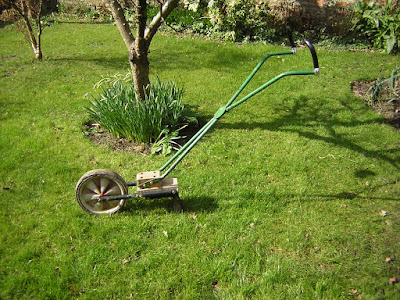 Idea - Slightly different version by Scrobs, some years ago...

Confirmation of idea - Seeing one for sale, but in a 1988 Marshall's Seed Catalogue, (discovered clinging to the back of an old gardening book) and causing panic in 'The Turrets'.

Wheel - 'Discovered' in pile of rusted mangled metal by the allotment tipping patch.

Handles - The old lawnmower handles somehow left in the roof after all these years...(they were also the subject of a mysterious series of letters between a certain Ms Bunty Binstock, The Grafas Fruning Graplecard, The Beast, The W-Bs, and of course, Modo, which wandered in all directions and eventually centred around the daily life of a deranged community in Scotton Pinkney many years ago! I ask you!)

Handle extensions - From Sgt. Wilson's motorbike - an idea pinched from a pic on 'Gurgle Images'.

Body - Bits of the old oak posts from the church notice board (the rest of the stuff was made into a rustic mantle shelf and return on the fireplace.)

Hoe blade and brackets - Old car/bike bars from past cycling forays in Bedgebury Forest before the arrival of JRT. They were sitting there doing nothing, especially after the said bike was commandeered by Sergeant Wilson... (the blade is now also updated with piece of metal from Mrs S's mum's old magazine rack...) 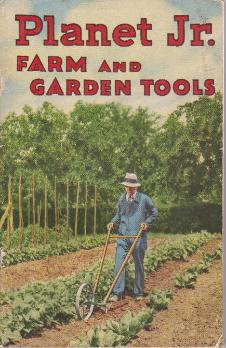 A typical picture of Scrobs, wearing the traditional garb of a keen but occasionally confused agriculturalist...

The idea of this type of hoe, is that the wheel enables an easy forward motion, allowing you to push your way between the rows of verdant, luscious vegetables, with the blade scraping just below the surface, thereby disturbing and aerating the soil, and also consigning the weeds to oblivion. It is also very quick.

It actually works extremely well thank goodness. There are several American websites which show nice expensive tools and contraptions, all very shiny and bright, but what's really wanted is a quick and easy way to clout the weeds and chuck the soil around a little, before getting home to a tincture or three of a Sunday morning!


p.s. The song is a favourite from the triple compilation album, 'The Music Makers', which would clatter round the flat after a few sherberts in 'The Two Sawyers' all those years ago...
Posted by Sen. C.R.O'Blene at 7:15 am 17 comments: 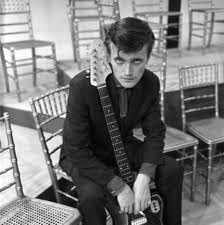 Sorry to see another 'hero' shuffle off.

For many young lads in the fifties and sixties, 'The Shadows' were the first real rock and roll group, but you didn't really call it 'rock and roll', because:-

b) Rock and roll was by some American group, and didn't sound anything like The Shadows.

Somewhere in the roof, I still have seven or eight EPs by The Shadows, and wouldn't mind getting them out (or on Ebay pehaps), because some of the music was good back then, especially one particular track. As usual, a story goes with it...

A few years ago, on one Sunday morning, I was making something in the garage and had the wireless on, listening to Invicta Radio. I also had a monstrous hangover, the sort which makes you wince at the sound of a small nail dropping to the floor, and feel faint when you have to bend down to pick it up!

Over the wireless, the presenter had a slot where he would play a bit of music - say a drum solo, and ask people to phone in with the answer. Now I never normally take any notice of these items, because some phone-ins are so dire, that I have to turn the sound down while Bert from Margate gibbers about, says 'you know' a dozen times, and generally makes the air painful, especially the air around a throbbing head and ears...

DJ Bob from Invicta was cracking on through his programme, and playing the same drum solo over and over again, and nobody was getting it at all! Directly I'd heard it, I recognised it as Tony Meehan's solo from 'See you in my drums' from The Shadows' first album. Well I would know it, as the prefects in the studies below our dormitory at school played it incessantly for about ten weeks...

And so I'd bought the EP, and listened to it for several more years, and life eventually went on without too many plays, until now!

After about twenty five 'Berts from Margate' had got it wrong, I had to do something about it, so I rushed in the house, grabbed ED's tape recorder, asked her to listen out on the radio, and be ready to hear her daddy, and then I called the DJ...

I was put on air immediately, and luckily, didn't stammer, say 'you know', or worse still get it wrong (I'd written it down on the back of a sanding disk, remember I had a hangover, and was shaking more than somewhat), and luckily, got it right. We chatted on air for a minute or so, and he promised he'd send me a prize, which was an album by The Three Tenors, which I gave to my dad.

So that was the one and only time Scrobs ever became famous, and it was all down to The Shadows, with bass guitarist, Jet Harris playing all of three notes over and over again, from start to finish...

'Bye Jet, your music was pretty good back then, and you were a Diamond!
Posted by Sen. C.R.O'Blene at 6:21 am 7 comments: 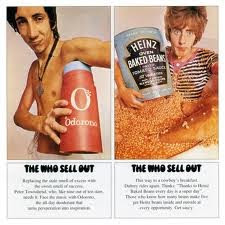 Yesterday, Mrs S and I were murmering about how much we liked 'The Who', and actually played their seminal album from the sixties. I'd known all these songs almost by heart since then and a chance visit to 'Circuit City' in Richmond VA, had unearthed a cassette, during a visit some years ago.

This all started because for no reason, the song 'Substitute' came into this ol' grey head, and I immediately thought of 'Senior Service Cadets' cigarettes.

Back in the impoverished student sixties, the young surveyor's salary wasn't that great; in fact there were even a few articled surveyors still around, which is an anachronism which would make today's business starters reach for the protest march handle.

The few pounds I earned were upgraded by my generous Dad, who'd always urged the Sprog Scrobs to go for a profession, or something similar. The accumulated cash (about £8.00 a week) usually went on much the same as anything today, like digs, rugby subs, train fares, egg and chips, a few beers, and of course, some fags.

When I returned to the vast bosoms of my landlady, on a Monday, I'd be well in with some folding money, and her rent (£4.00) was always paid on the dot. And, because the rest of the cash was holed up in a rapidly burning pocket, the week would start with twenty 'Players Gold Leaf', which would last about a day and a half. This would continue until about Wednesday, when it was down to one egg and chips, and I also needed some shillings for a few halves of bitter most nights, but by the Thursday, the pocket was considerably lighter than it had been on the Monday.

That was the moment when these tiny sixpences and shillings were counted up, (several times) and I'd realise that 4s-7d (23p), was out of the question for any more Gold Leaf, and it was down to the Cadets at 3s-9d (19p).

And so the last evening at work (I went home on Friday evenings), was spent enjoying the rasp of those little smokes, a couple of halves of the cheapest bitter I could find in 'The Duke of Marlborough' Ashford, and - yes, with the chums agreeing - a threepenny play of 'The Who's 'Substitute' on the juke box...
Posted by Sen. C.R.O'Blene at 6:19 am 24 comments: 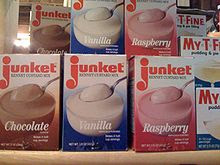 My dear Mum used to make this stuff regularly.

Somehow, because of the expectation of something sweeter than the chocolate drops I'd buy by the hundred-weight from the local shop on a Saturday afternoon when I was about ten; my lovely sister and I would go 'Woooooh' and scoop it down without a murmer.

While nurturing GD today, she sat in her high chair, (Grand Daughter, not Mrs S...), and proceeded to spit out another similar delicacy from the Scrobs' formative years - egg custard!

The subsequent discussion ended in confusion, GD looking slightly bilious, and JRT rushing round the floor, hoovering up anything which had been dropped! We both wondered why we used to eat junket, or egg custard, and have decided that it was a delicacy which will always remain in some infantile fantasy, something which was so special because our Mothers had decided it was, and we'd better sit down and enjoy it - or else, but, it will never actually get a mention on a McDonalds menu.

More's the pity, I learned that egg custard had nutmeg sprayed all over it, and also what rennet actually did to milk all those years ago.

One too many mornings... 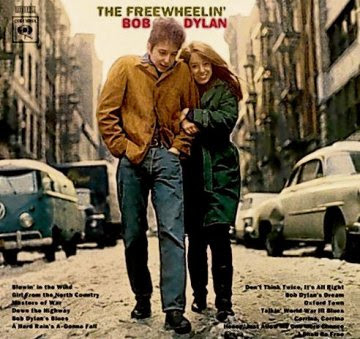 Yesterday, I caught a radio snippet of an obit on Suze Rotolo, whose picture graced many a schoolboy's study wall in the nineteen sixties.

The commentator mentioned that Joan Baez, after she had become Bob Dylan's squeeze, popped a few songs into her covers of Dylan's songs.

It might have been a bit thoughtless for Joan to sing a love song which Bob had written for Suze, but there you go...
Posted by Sen. C.R.O'Blene at 6:10 am 8 comments: