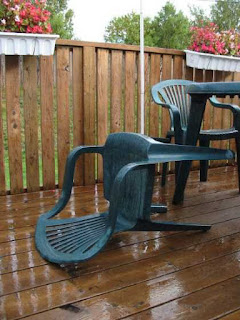 I received this awful picture of the utter devastation experienced by one family last night, when the earthquake struck several thousand square miles of our green and pleasant land.

I understand that the house owners are in deep shock, and that they have already filed for compensation under emergency rules announced by the Home Secretary today.

My thoughts are with everyone concerned, and I sincerely hope that the battle to restore order will continue apace, until we can all breathe a sigh of relief, and move on.

As most people know, the Scroblene PC is dormant for many hours of the day, as there are too many other things to do.

But while Mrs S is perusing 'Larkfield to Quatermass', I've got a free rein...

Ed, has posted a superb recall to 'your correspondent's' mind here : -

and it's well worth a check-out, mainly because

A) I can remember coppers being like PC Edwards,

B) my Grandad built lots of buildings in Letchworth and Welwyn Garden City in the twenties, and he may have well liked to read this.
Posted by Sen. C.R.O'Blene at 8:39 pm 6 comments:

Mrs S has just reminded me that we have to have the Scroblene Turrets sewage treatment system emptied this week.

The firm we use are great, they turn up on time, are no hassle, clean up afterwards, and leave quietly with a cheque for £85.

The name of the firm is 'Sucklifts'. 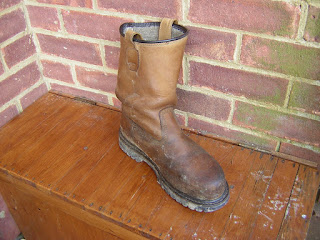 As at long last, we actually have a building on site, I had to rush out and buy a pair of safety boots, because a) our contractor won’t let you on site without them, and b) it bloody well hurts when you tread on a rusty nail, or drop a brick on your foot!
Also, these boots are incredibly comfortable, and I use them when walking JRT and Mrs S – in no particular order, in the woods, or anywhere for that matter, including Twickenham.
Just recently, I noticed that the top half of one boot seemed to be having a severe argument with the bottom half, and was going through a form of separation; i.e. had split. Now I’m not normally very litigious, but somehow, after totting up the hours they’d been used, it only worked out at about a couple of months wear, over a period of time, so perhaps something was wrong.
So, off to ‘Bucket, Phewthat’llcostafortune and Sagtrouser’, Builders Merchants to the Gentry, to issue a mild complaint. Sure enough, their response was ‘Phew, they won’t take those back, they even charge postage if they’ve been misused’! Naturally, I said, ‘Hmmmph, well you’d expect them to last a lot longer if they’d been soaked in pug and oil for six months’, but Mr Elias Bucket was unswerving to the point of obstruction, and I was going to lose this one (especially as the shop was filling up with subbies buying hammers and bricks and stuff, all towering over me and smelling of Drum roll-ups).
I was bereft of boots. Shoeless in Kent. Unshod. Without sole...
Now, on the website for the manufacturer, there was a contact email address, and I’d popped one off to them just before all this unpleasantness, in the nicest possible terms, as funnily enough, when I’d bought them, I’d registered with them and got a free wallet, but that’s another story.
Sure enough, the next day, there was a reply from the manufacturers apologising for the delay and asking for photographic evidence of said problem, and receipts etc. blah blah blah. So out came the Nikon, and the above pic was whisked off. (Left boot, Leather, Scroblene for the wearing of...).
Within hours, there was another email apologising for the problem, immediately agreeing there was a manufacturing fault, and that a replacement pair would be sent immediately. They arrived on the Thursday by TNT, and I’d only started all this on the Monday!
So for bloody good service, excellent PR and superb commercial awareness, buy your kit from Scruffs http://www.scruffs.com/ but don’t check the recent item in ‘The Sun’, if you’re anyway squeamish…;0)
I said DON’T Google the item in 'The Sun'!
Well I warned you…
Posted by Sen. C.R.O'Blene at 5:34 am 8 comments: 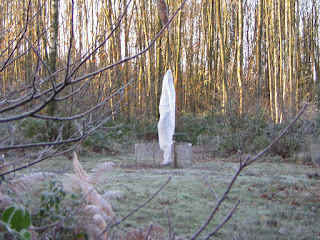 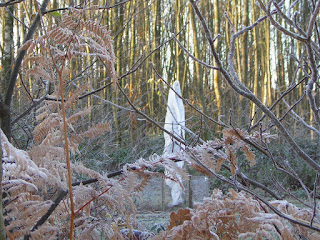 It just reminds me of an Angel in marble...

Actually, they look after some of the more tender trees and give them a good coating of bubble wrap, but the effect is the same!
Posted by Sen. C.R.O'Blene at 7:24 am 3 comments: 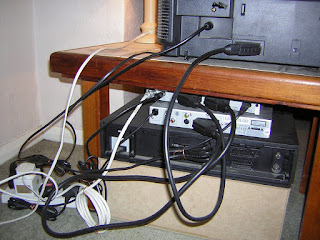 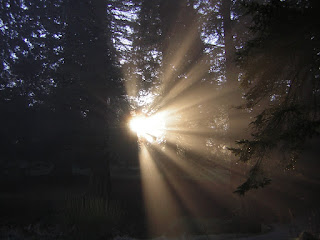 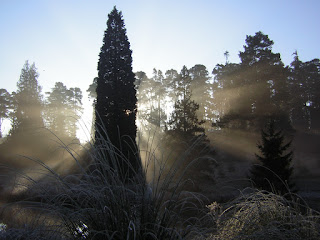 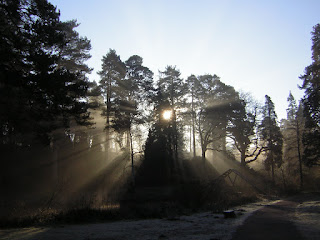 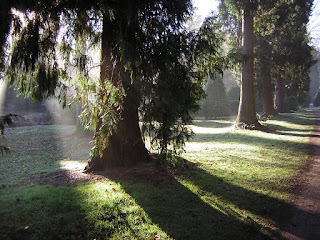 Lilith has some fantastic pics of spring, and I'm bereft of anything to post at the moment.

One reason for this is that I'm trying to figure out how to record something on an analogue DVD recorder, while watching a Freeview programme. Now, if I have to make something, I try and make it as simply as possible, then maybe bung on a bit of architecture later. Designers of electrical kit don't seem to work that way, and as a consequence, I'm also having to take a course in rocket science, just to flick the switch!

So here are some peaceful pics of a beautiful walk in the woods we had yesterday, with the tireless JRT (she understands, as directly I start poking around in the morass of cables, she comes up and starts licking everything...)
Posted by Sen. C.R.O'Blene at 5:51 am 16 comments:

The previous post on this site was probably the most boring I’ve ever seen, let alone written.

If it wasn’t for the welcome comments of Relucs, Hats, Daisers, Dennis and Lils, the whole issue would have been seen as less interesting than a hastily prepared draft for page 93a of an MP’s pathetic excuses for employing one’s three-legged dog’s sister's cousin as a part-time chauffeur and ‘diary secretary’. (Why do ‘important’ people need a ‘diary secretary'; can’t they write - or read - simple words like , ‘Mr Jones, 3.30pm’)?

The real reason for my utter despair is as below...

When headlines like these are the norm today, I would like to ‘park’ the travel post and concentrate on the issues of life after my visit to Twickenham yesterday.

I like Welsh people much more today; they celebrated their well-deserved win with euphoric good heart and I walked back to the station with not a single regret - except that I would have allowed that try in the corner...
Posted by Sen. C.R.O'Blene at 6:13 pm 10 comments: 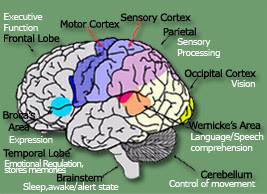 Mrs S and I were discussing how stressful driving in the South East is these days. She mostly shops within – say, a 12-mile radius like most people do by car, and usually has a frightening ‘white van’, or ‘boy racer’ story after each trip, and we both cluck at the stupidity of ever getting a car out of the drive; let alone going anywhere.
Then the discussion turned to how everyone copes with having to be in ‘control’ of getting somewhere. I’ve long suspected that as we live in the country, we are really pariahs in the minds of Government, and I’ve stopped driving to London most days as I used to do and stick the Scroboxter in the car park and hop onto a train.
And this is where the stress/control obsession develops.
Mrs S and I now drive much slower to let the yobs get as far as possible in front of us, so they can have their crash out of sight, and we are less up-tight as a result. We are in ‘control’ for the whole time. But it is not a pleasant way to get anywhere now, it is usually a tortuous journey and anxiety on the road becomes more of an issue.
So what about stress/control on trains? You are in much less control; you can’t really do anything if there’s a problem, but at least, if something nasty happens, you are still on terra firma, and will have a good chance of survival. So you have traded ‘control’ for less ‘stress’. And you go faster...
The ultimate travel is flying, where you have absolutely no control, so therefore why be stressed at all? And you go the fastest way possible...
Mind you, I can get up tight about anything trivial, like someone eating an industrial size bag of crisps in my ear, or kids ‘effing and blinding’ without understanding the words, but this isn’t stress; it’s old-gittery…
Posted by Sen. C.R.O'Blene at 6:36 am 6 comments: