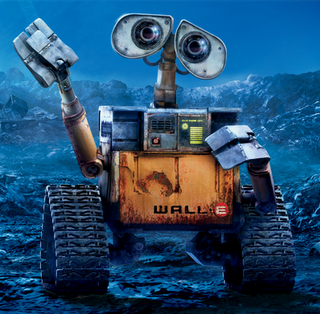 YD tipped me off about this, has anybody heard it?

Now safely enplonked in my Ipod, it's been going through this grey head all week...

It seems that I'm the only person on earth not to have seen the movie too!
Posted by Sen. C.R.O'Blene at 7:07 am 3 comments: 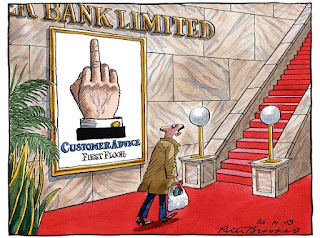 Peter Brookes' perfect cartoon in 'The Times' today just sums up how we are being stuffed by the banks - again.

It also strikes me that the lights on the stairs look remarkably like those normally seen in the background, when Beeb hacks meekly trot off and crave interviews with shuffling, nervous, inadequate, pompous, inarticulate, unqualified, infuriating politicians. 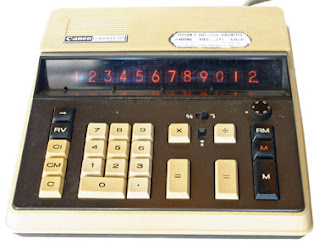 As the slide rule post is grinding slowly to a climax, (and I can tell you, I've learnt quite a lot about people from the last post!), I thought I would add insult to perjury by explaining a little more, why calculators are so important in Quantity Surveying!

This really is rivetting stuff, and not for the faint hearted, so Ladies and Gents, pull up a pouffe, pour a green-tea, and I'll begin...

Up until the late sixties, the offices of QS firms operated a form of torture or apprenticeship, which would coincide with the starters getting qualified and moving up in the world. The difference between then and now is that calculators were a rarity, and not the size of credit cards which they are now. The machines we had were about the size of your average multi-tasking printer, with glowing lights and a keyboard rather like a Star Trek display...

(Little known fact - The hardware and software on the rocket and other kit, which took the men to the moon, was not as powerful as that designed into your everyday Beamer 7 series...)!

Anyway, back to Quantity Surveying! This really is exciting isn't it... (more tea Vicar?)

When sprogs were taken on straight from school, they usually had a couple of GCEs and a series of bruises behind the neck from being battered by schoolmasters like the one in 'The Wall'. Their first job was perhaps making coffee, buying Partners' fags etc., and coping with amorous telephonists, (I've got a nephew just like you; nice boy, strong legs, plays rugger...how old did you say you were...ooooh). But for real work, they were put in a darkened room, usually a small windowless cupboard with a single unshaded light bulb, and ordered to calculate, by hand, using duodecimals, a list of figures on a pile of paper about a foot high, which was constantly added to by immediate superiors who smoked Gold Leaf and wore mohair suits (40 Guineas...).

Year one - Lowest of the low, little self esteem, probably just kicking the 'Clearasil' years, usually ignored by older members of the firm, told to calculate millions of areas, cubes, lists, schedules, (without the use of a single cylindrical slide rule or anything mechanical or electric...), thought Luncheon Vouchers were better than salary, fancied Gloria in Accounts; and her mother.

Year two - Promotion to Worker-Up. (True Gals...)! This meant that he or she could actually do some writing as well, or copying at least. It had to be done correctly and checked. Once the processes had been carried out, there was proof reading as well, God how we lived then, it was magic!

Year three - More Working-Up and even being in charge of a 'job' and allowed to beat up all the other juniors like the year one guys, and steal their fags, sandwiches etc.

Year four - Promotion to Taker-Off. (Even truer Gals)! This was a skill which was earned by experience and a detailed knowledge of the Bible of QSing, "The Standard Method of Measurement". It entailed measuring quantities of building materials and labours from drawings prepared by Architects, who were an odd race that walked on water at the time. The Taker-Off would write all his numbers in lists on Bill Paper, (Not the bloke who lives at No 45, a pad of specially ruled paper, please keep up...)!

The Taker-Off was indeed secure for life. He or she would be among the first people ever to cultivate the 'Nerd Pack', (a row of coloured biros in the top jacket pocket), and these would be carefully laid out next to the pile of paper in readiness for the day's work. Pencils were frowned upon, but rulers were needed by the ultimate perfectionist.

One man had a folded Kleenex on which he would carefully wipe the ink which gathered round the Biro tip...)! A highlight of his work was a 'Colouring Friday', when he would colour up important parts of a building on the drawing, to define the detail more easily! Another chap would occasionally pop his head round the door, and say something inane like "I've just done a reduction estimate on Chase Farm, Heungh Heungh Heungh"; all in the voice like Bluebottle's in the Goons).

So that's it! This was the start of a career which actually veered away pretty quickly from the original course after all the excitement explained above, and which is probably why I never made a fortune (yet), but with the experience of all those rude procedures, telephonists...oooooh, small rooms (and shenanigans) in the basement, well, the world's your oyster, er, wasn't it...

Lils has prompted - nay; cajoled - nay; jugularised me to do this post which I once threatened I'd do for Elbers who is a clever chap (much cleverer than me), and only because I'm possibly a dormant nerd passim, a hoarder, a collector, a greying, shambling, emotional won't-let-the-past-go-type-of-bloke-with-stuff-in-the-roof-which-he-just-can't-chuck-out; - er - yet...

So here it is!

There; I've said it, and I must tell you what a relief it is to mention how much I'm going to enjoy life from now on!

My Dad used a slide rule all his life. It was an engineer's calculator, a scientific object to fiddle with on your desk, a magical instrument to teach your son when you're taking him away to Wales to boarding school, and need to occupy the lad until he's either bored to tears, or just full of tears.

Dad had at least three linear slide rules, and another cylindrical model here 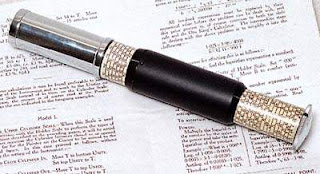 which for the life of me I cannot understand one bit!

For intricate calculations, he'd use a single bar linear rule which was about two feet long, and was incredibly accurate. He then graduated to stellar numerology...

This pictured Otis King model 'L' was the bees knees up until the late sixties, when electronic calculators came on the scene. I worked in Westminster in a Quantity Surveyor's office then, and we had calculators which cost £350.00, and were the size of a multi-tasking printer from Currys now! They were huge, and did peculiar things if you pressed all the keys at once, then left it to smoulder; which we regularly did after taking bets on the number which would flash up after lunch...

But these slide rules are a bit special still, and they don't need batteries, and they still work after fifty years, and - well, they're a bit of Scrobs' history...
Posted by Sen. C.R.O'Blene at 8:43 pm 22 comments:

Iders has started something which has been on my mind just recently, and already the responses are flooding in...

A few months ago, I posted this, because the Pink Floyd classic made me get all the old LPs, cassettes etc. out, not to mention scouring the Youtube offerings!

What I want to do here is continue the quest for the RoHoBoN moments (Raising of hair on back of neck), and kick off a new series, following the first one with 'Echoes' of course, and present probably my all time favourite RoHoBoN ever...

Vaughan Williams' Sea Symphony is so beautiful right from the beginning, but the few moments from 2.02, rising to 2.13 and then arriving at a gigantic soaring triumphant phrase, with a spectacularly dramatic, exhiliaratingly gorgeous high crescendo at 2.17, means I have to climb down several stairs from the ceiling, with severe palpitations and nerves all a-tremble, every time I hear it!

It really is the most emotive few seconds of music I've ever heard, and just to share the thrill with everyone, here it is...

Turn the volume up so those living three villages away can hear it!
Posted by Sen. C.R.O'Blene at 5:31 pm 22 comments: 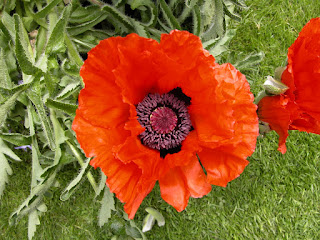 One of the sights which makes me extremely angry, is BBC footage of Gordon Brown wandering around the troops in Afghanistan, trying to look brave. Pictures of this awful person, with so little bravery to his name, taken among real soldiers and fighters, just remind me every time that men and women in both Iraq and Afghanistan are dealing professionally with a proper situation, and as experts, are having to do their work with precious little support from the serial troughers of the worst government my generation has had to endure.

While trying to reduce my blood presure from 'Astronomically Unaccountable' past 'Never seen anyone this high before' to 'Nearly below boiling point', it took a scan of the papers this morning to focus on what the weekend is really all about.

One article jumped out from this piece, and a few clicks found the Commonwealth War Graves Commission site which has an incredibly detailed account of the disaster known as Fromelles. This is where it all happened, and the area is now being dedicated to peacetime - for the moment anyway.

What bloody hell that 'battle' was; and I just didn't realise how many Aussies and Brits, and Germans, went down that day. And we can now glorify and humbly appreciate the word 'Cobber', from there.

Scenes like this show that the actions of generously paid politicians will rightfully mean that they'll have much more to worry about after next May. Sean Brierly and his Dad, and his Mum, are three of the heroes here, not the grinning one.

The grinner and the gobbler deserve nothing but spitting contempt from truly brave people, and while these disgraced politicians continue to place themselves above experts and the electorate in nearly everything they do, I'm looking forward to their crashing downfall, and it can't come soon enough.
Posted by Sen. C.R.O'Blene at 5:58 am 13 comments:

When we were small... 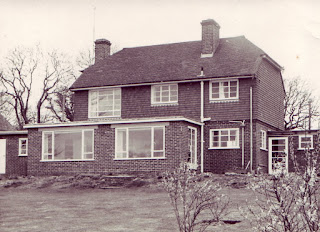 When the Scrobs you know and occasionally love - may do, may do not... - was pretty small, i.e. in the fifties, Elder Scrobs (Phil) and Elder Scrobs' brother, (Jack), built their own houses in a village not far from here.

Well, they had a proper building firm doing the actual work, (in fact it was the firm that Jack managed, which was encouraged after the war when reconstruction was the norm). It was a big venture, but Jack had got planning permission to build two detached houses on a two acre patch, and the two brothers - sometimes aided and abetted with a third Uncle Bill, built homes for us all in 1953.

The two different houses were on their own plots, and Mrs Elder Scrobs and Mrs Elder Uncle Jack Scrobs (oooohhhh bugger this is getting tiresome...) MY Mother and MY Aunt) always kept in touch through a gate in the fence, and usually visited each house when they wanted to as they were good chums and had been through a nasty war together, while the blokes were away fighting the others.

And so, when I was very young, I'd visit Uncle Jack, and Auntie Connie whenever I wanted to, by nipping through the gate! I expect I caught them at it occasionally, but hey - so what, I was only a lad...!

Uncle Jack had started a collection of Giles cartoon books - all gone now sadly - and I used to look at them all every time I went there - often several times a week, and just soak up the humour, laughing all the time and eventually being asked, through a cloud of pipe smoke "Are you wearing out our Giles books again, with a huge twinkle, and a chuckle...