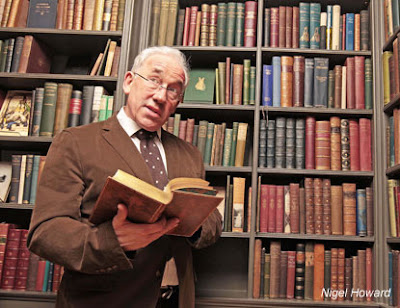 A couple of weeks ago, I was listening to a programme at about 4.00 am, when the day's your own, and peace reigns. It turned out to be Simon Callow's one man celebration of Charles Dickens. What a marvellous production, and well worth listening to if you have an hour and a half!

Latching on to the article here, it rang a few bells with me, because over the last few years, reading has become so important as television productions have, in the main, become so appallingly bad.

So it needs a good teacher to re-invent reading perhaps, and Simon Callow certainly does that with his show! The Dickens characters just pour out in a tumble of accents and phrases, he mimics all the voices and his enthusiasm just inspires even more reading, and also much less rubbish on the TV and unfortunately the radio as well... 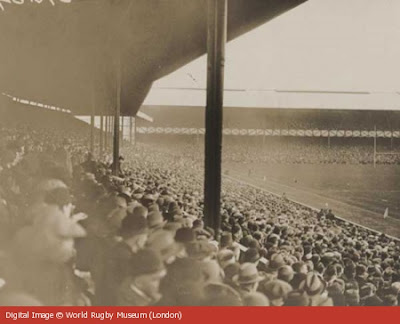 When Scrobs was much younger, more agile, more amenable to life in general, more athletic (that's enough 'mores' - Ed), Mr Scrobs Senior used to have a good friend who was well into his eighties.

Now this elderly gentleman was a charming, funny man, with a gorgeous, chuckling Swiss wife and a little dog whom they sometimes called 'Pisspot'. He lived in a lovely house straight out of Country Life, and had been a successful business man until the years began to dictate his time and regimen.

Now Mr Elderly was a rugby man though and through. Not for him the pathetic squealings of gormless footballers on increasingly large wages which were squandered in night clubs and boutiques (pre-flared trouser days these), he wanted to support the amateur game with no exception, and delivered homilies on how gentlemen played rugger, etc etc. He also held two season tickets in the old West Stand at Twickenham, almost on the halfway line and halfway back. They gave a magnificent view of the action, except for the small problem of a large pillar about 12' in front, which meant that he had to keep craning his head either way when play was about central, but that was a minor issue.

Because the years were beginning to tell on him, he was often unable to go to watch the matches, because it was a very draughty old stand, and was no place for arthritis and aching limbs over 90 mins, so he used to ring up Dad and tell him that the two tickets were his, for the face value, if he wanted them. They would cost about three guineas each.

More often than not, we would get a call around Friday afternoon with the offer, and we'd frantically collect warm clothes and scarves, Mrs Elder Scrobs would cook up all sorts of picnic items for the car journey, and a general feeling of excitement was felt by all at a time about now, when the Five Nations Championship matches were starting.

Dad always planned to park in a church drive close by, which always worked. They charged just a few bob, and we had a quietish spot for the pre-match picnic, maybe a couple of beers when I was old enough, before joining the festivities.

I went to lots of these matches, including the 1969 South Africa game, with the orange faced Peter Hain trying (and failing again), to vilify the sportsmen, and I also saw the All Blacks with their giants in action. We usually hated the French, love-hated the Welsh, (I'd spent several years in a Welsh boarding school, and therefore had two hats, both of them English...), we wondered if the Scots would ever win anything, and loved - occasionally - the Irish because Dad worked for Guinness. We had heroes such as Bob Hiller, David Duckham (whom I email occasionally, as he runs a Sporting Dinner Club), Ron Jacobs etc. They were all up there with God.

So fast-forward to nowadays, and when I get a chance, and when someone is generous enough to call with an invitation, I get just as excited about the trip, and begin to reminisce about the Old West Stand bar, and how nobody really wanted to leave until well after dark. And, another reality check also arrives in the equation.

I've just checked on the prices of tickets, and those same seats (or at least the same positions in the new stand), would cost £357.50 each!

Pisspot's Master would not be too happy about that, and neither would Dad actually...
Posted by Sen. C.R.O'Blene at 4:04 pm 12 comments:

This is an utterly remarkable clip from the Today prog a couple of days ago.

Apparently, there were then several seconds of stunned silence, and Jim Naughtie could only express total admiration. His co-presenter was even more explicit..."Wow"! 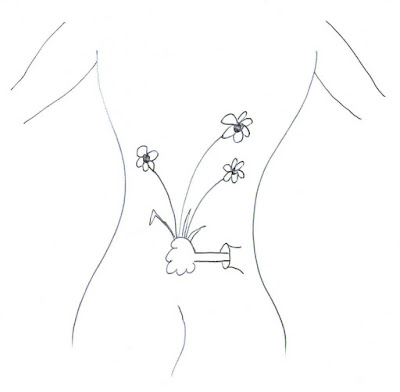 
Elias Sagtrouser has been regaling me about the recent antics concerning his stupid son Meccano and his squeeze, Toniatellene Nougat, Spinster of this Parish.

Over several pints of Spitfire, I learned some interesting facts, and it is these gems of knowledge which I can now impart to my three readers.

It's all to do with the latest furore regarding the removal of implants; you know, the ones made from carbide and heavy water by the French. Well, Toniatellene's mother, (now long fled with a copper cable expert), gave her some implants for her sixteenth birthday present, admittedly quite a few summers ago. Back then, these enhancing structures were paid for in cash, and the operation was performed by the light of a passing bus, but at least they weren't going to explode! Well, they wouldn't being made out of Cyril Lord underlay would they! But I digress.

Elias, after three more pints and two beef sandwiches, continued his verbal destruction of the human race in venerable tones and horseradish fumes. I listened obediently, because there's always a big ending to his interminable stories, some of which have been known to last for several days and nights.

He has been making a thriving business from The Tattoo Ink Scare. "What", two of you may ask, as the third wouldn't have read this yet? I'll say it again, THE TATTOO INK SCARE! Apparently, there has been much said about how some tattoos have been administered to the various bodies, young and old, who demand these embellishments. One unfortunate problem has emerged from a previously unseen paper by an ex-government minister, who will be nameless, (Bert Grope, Lab, Oopnorth Central) whose researcher found that some tattoos had been drawn using a machine with Belgian needles, and worse, they're coloured with Nigerian ink!

Now this is 'mind-blowing', (In fact, Elias was more explicit - even Anglo-Saxon on this fact, but with several beef sandwich crumbs still adhering to various parts of his body, and a small puddle of beer collecting at his elbow, I'll leave the exclamation description to your imagination), because everyone knows that the Belgians are normally excruciatingly honest about their business regime, whereas, the ink which comes out from some areas of Nigeria, especially as most of it is used to write letters to obtain bank details from people in Harlesdon, may well have all sorts of contamination in it! The mind boggles!

So when Toniattelene demanded that her doctor remove her tattoos, (not her underlays), he told her to p*** off, and not waste his time, as there is a sizeable acreage of silly blue flowers and bird shapes plastered all over her body. Meccano is almost as bad, and he has to live with the bad spelling he told his tattooist to scrawl on his chest when he first met his sweetheart, 'Tonybliaralone' all those summers ago, (he had an ear infection and couldn't actually understand her name).

So Elias is now finishing his story, and it has indeed an interesting ending, and not unwelcome at 11.30 pm, when I am tired and want to go to my bed. He has employed his idiot son to tour the clubs and pubs of various late night districts with a collection of cards. On one side, is the comment that 'Some tattoos have poisonous ink', and on the other side is printed 'Come to Elias Sagtrouser's Emporium for tattoo removal on a budget'!

So I have to ask my good friend what he's really doing.

"Oh, it's easy", he says ordering a last round yet again, "I sell 'em a bottle of paint stripper and a brush, and tell them to do it themselves! Cheaper that way isn't it, and we're on our second lorry-load already"!
Posted by Sen. C.R.O'Blene at 6:04 am 5 comments:

I see they're promoting a new Mondeo car here, and I'm intrigued as to how anyone could have driven the old company cars I used to have back in the seventies!

My first was a Mini van, because, as a lowly quantity surveyor, with a small building firm, they used it during the day, (usually after a fight with me), for doing the rounds of the sites when I was stuck in the office.

My first real company car appeared in 1975. It was a Navy Blue Ford Cortina Series 3, luckily a 1600 (I was carefully advised as such by a chum at my garage). This Dagenham Dustbin held sway for several years, until the inevitable change of jobs gave me - worryingly - an even older one in metallic brown, then a purple one, then a duck-egg blue one!

So, without boring the pants of everyone, including me, I reckon anyone getting something like this as his or her work horse is getting a billy-bargain, and let's hope he or she won't ever vote for Tony Bliar again...
Posted by Sen. C.R.O'Blene at 10:09 pm 11 comments: 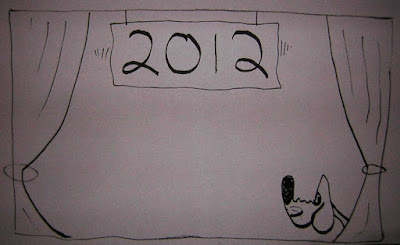 Roll up, roll up everybody - it's time for panto!

Coming to a town near you:-

Vince Grass (Narg Sweebling's stepfather's milkman in 'On the buses', 1964)
Victoria Plunge (Violet Pudding's hairdresser's sweeper-up in 'Bless this house' 1948)
Gladys Pilbeam-Wollage (Gloria Lump in the never shown 'Arse about face', 1932).
Three other long-forgotten has-beens from dire trashy soaps, that nobody ever watched without an industrial sack of crisps and a gallon of economy super-strength lager.
Someone who doubles-up as the cleaner in the theatre with hilarious results.
A small beige dog called Colin who steals the show.

Scrobs would like to wish everyone who buys a ticket, a happy and prosperous New Year.
Posted by Sen. C.R.O'Blene at 6:07 am 21 comments: