The Art of Coarse Life...

I'm so saddened to read from Duff and Nonsense, that Michael Green has died.

Michael Green first came onto Scrobs' screen back in the '60s, when I was at school, and subsequently revered all his books, which are the funniest I have ever read. 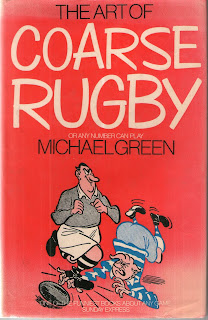 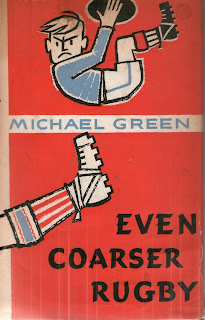 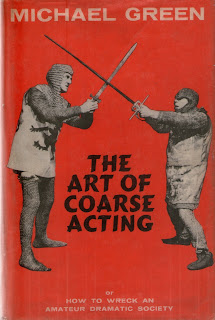 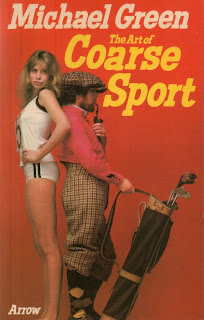 I also have 'The Art of Coarse Sailing' and 'The Art of Coarse Golf', which are just superb! The dust covers went years ago. We actually tokk the former on a Broads boating holiday once, and recognised so many passages! As for golf, I was no better than the coarse version, and gave it up when I was in my twenties.

By coincidence, Her Fragrancy, the Senora O'Blene and I gave each other as many Michael Green books as we could find for Christmas last year, and sadly - or perhaps hilariously, I'm right in the middle of 'The Art of Coarse Acting', which Duff and Nonsense describes!

I must have read all these books many times, as I can remember several passages by heart. Whenever I hurt my leg doing anything, it's always 'the zongular tendon', mentioned as an imaginary rugby injury, and I'll always recall the immortal line of Lady Macbeth coming down the stairs, and putting her foot right in a brazier...

There was also a novel 'Don't print my name upside down', again with a memorable passage describing a note scrawled on the wall next to the jounalist's telephone 'I have now been here for three-quarters of an hour, trying to speak with the Council's Water Engineer'!

'The Art of Coarse Acting' is just superb, and there were several sequels which I have yet to read, but my favourites have to be the rugby books, as it was probably his writing which convinced me that if I coudn't stay in the First XV, being a good tenor in the Thirds wasn't such a bad alternative!

I shouldn't be surprised if The Art of Coarse Heaven' doesn't come out soon, because he could write humour into everything...! What a great chap!

One of my oldest blogging friends, Electro Kevin, has some great news to impart. He doesn't do a blog at the moment, but is a regular on C@W and other great sites, where I can see his posts and other stuff.

Since I started doing an online sort of thing nearly eleven years ago (when the real Scotton Pinkney site was around), I made so many good online friends, like Lilith, Philipa, Idle, Tuscan Tony, The Lakekelander and several others, I miss them all, especially Kev, who is a stalwart in his own skin, and we've heard of his twin sons who started getting going since before the eleven plus which they passed just like that!

I'll just cut and paste Kev's comments for the world to see, because Mrs O'Blene and I are are just feeling great about the results!

Sorry to brag, Scrobs. I just can't keep it in. Laddo's come back from med school (2nd year - where did that go ?) and has won a 4 year scholarship to research brain tumours during his summer hols. He gets mentored by leading brain surgeons and specialists - maybe a stint in Harvard too. £2k a year so no more Deliveroo at weekends for him. Yay !This is the medical equivalent of being selected for the youth squad of a top six Premier League side. Literally top in his year. He's decided he wants to be a brain surgeon and hopefully this will set him up with the contacts, experience and CV he needs to be selected for it. They like his attitude and from the Facebook pages he is clearly a very popular young student. The other twin is doing well too - MSc in Chemistry, excellent results but not quite so driven. V proud of him too.

They were nine eleven years ago so we were in the prep stage. I recall that period. We could not afford to have both go through the tuition so we paid for one and Mum got paid in free tuition for invigilating the weekend mock exams which went on for about a year. The boys got to the grammar and Sam decided that he wanted to be a doctor at 14, which we took with a pinch of salt (most kids say that) but looked up what he needed to do. He had to build a CV of voluntary work, DofE, sport - a set of extra curricular activities that developed well roundedness. He represented England at orienteering, coached in underwater hockey, helped out in a hospice at weekends and held down paper rounds and shop jobs (in sixth form.) It was important to keep him in a motivating peer group - both orienteering and underwater hockey have a fair number of doctors in them. When his GCSE results came in we knew he was a contender. He got the near perfect scores that medical school demand. He then opted for IB instead of A levels with a bent towards chemistry, biology and maths. He got 39 out of 45 which is the equivalent of 4 A* + 1 B at A level. Only one university offered him an interview. As it happens the one that did took him on. The less I say on this the better. I can understand universities rejecting a candidate of this calibre but to not even interview him ??? We can all surmise why. Their loss, quite clearly. We are so thankful to Leeds for taking him on.
As well as his IB he had to take two extra exams: UK Clinical Aptitude Test (UCAT) and British Medical Aptitude Test (BMAT) - these were taken at the local driving test centre where everyone else was doing their driving theory test. This on top of an already heavy workload. This guy is EXACTLY the type you'd want poking around your brain in a crisis.

rvi - I have twins. The other is doing a chemistry MSc and is scoring 90%s in exams and dissertations (Southampton)... yet this is overshadowed (we are trying to be conscious of this situation.)Sorry to brag yet again. I'm just astonished by it all and trying to comprehend it. Durham is a fantastic university. My niece has a shot at Oxbridge but wants Durham for her English Lit as it is the most revered in this subject. Her Dad's Chief Scientist Engineer at Gillette and her uncle's head engineer on fuel systems at Jaguar. There are several teacher in the family and wifey's a systems analyst by profession... and here I am... a simple train driver serving the drinks !I do feel a bit left behind at family gatherings now. (We had a house full of med students last summer.)


Scrobs here now - All I've done is cut and paste the lot, as they're Kev's words, not mine, so the story unfolds magnificently!

I'm absolutely delighted and so is Mrs Scrobs, that we see the result of a lovely family, over half a generation of time on this small blog, but seeing men actually, getting there!

Best news this year by far!

Scrobs is fed up with seeing the awful layout of the previous post, so here's a later one to start the weekend with a song, a cheer and a tincture.

I'm not actually writing anything, just making sure that I don't have to see the stupid white lines behind the letters!

Three more for the trough...


There were the usual grumblings in the committee room of Sodden Prickney Parish Council, when it was announced that Waynetta Slobbess, the errant offspring of Ms Cynthia Molestrangler, had eventually pinched an invitation to Count Basil Kalashnikov's son's wedding, and wouldn't give it back.

Waynetta (48) taught bicycling to Ms Edwina Baggage at quite an early age, which is why the famous column (whaaaat! - Ed) is so prominent in 'The Bugle', and Ms Baggage is an expert in such matters, having had many bicycling experiences in her turbulent career. The landord in 'The Bells' will testify to that, as her expenses didn't always cover the bill, but parts of her did - allegedly, and usually when the landlady was absent.

So it appears that the caterers have to find three more places on the trestle tables and get three more chairs - extra reinforced, as it seems that the two very plain sprogs belonging to Ms Slobbess are being dragged along as well, much to the astonishment of anybody who bothers to show interest. The two are rather odd females but no doubt the Sodden Prickney PC will help shoulder the bill for their voluminous appetites and peculiar table manners (shurely not table-ending again - Ed).

Meanwhile invitations have been pouring through the doors of the rest of the committee, including the new secretary, Madame St Mont-Shemel, who hails from Brittany, and who has apparently been invited three times, although why Ron Groat feels he is in a position to invite anybody, is somewhat obscure! Miss Amelia Newt has already ordered a new pair of overalls, and a different sort of hat. She will be dealing with Alderman Groat when he next calls round for his tea, and it is understood that it won't be a pleasant experience.

Count Kalashnikov has decided that only the local mild beer will be served at the wedding breakfast. This is mainly because some of the lady members got over-excited at the last public gathering and did a communal 'Zulu Warrior' on one of the tables, until they were asked to leave, mainly by being dragged by the hair and dumped outside the back door until they sobered up. Mr Kalashnikov suffered a partial embolism at that particular event, well, that's what was reported in The Bugle, but others know better...

So it seems that the bloody wedding is still going ahead, and most people in the village are fed up with the incessant rubbish being printed in 'The Bugle', and really couldn't give a monkey's.

(Edited on strict instructions from our Proprietor, The Hon. R.E.Evers)