While Basil Kalashnikov was on holiday in North Korea, two forgotten old farts from his parish council days decided to try and develop a 'coup', by endangering Miss Newt's landlord, Sid Trumpet, and getting the postcards and letters counted again. 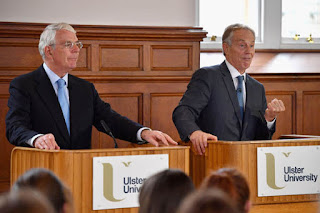 There was uproar in the council chamber, as Edwin A. Loser (shown left) raised a high nasal sneer at everyone who voted for Mr Trumpet and said he wished he could try and be chairman again. His chum, Tone 'Dodger' Tossier, agreed, and they both sang and danced a quadrille while chanting some sort of anthem while nobody took much notice.

Most of the village stayed at home, preferring to watch re-runs of 'Breakback Mountain biking' with sub-titles.

The film, not the recent US Presidential race...

As Mrs O'Blene and I watched one of our favourite films again last evening, 'The Great Race', with Jack Lemmon, Natalie Wood and Tony Curtis, and in between absolute hoots of laughter, we suddenly realised that the cars all had their steering wheels on the right!

This was news to me, so I had to find out if it was one of Blake Edwards' merry japes, or a true fact! 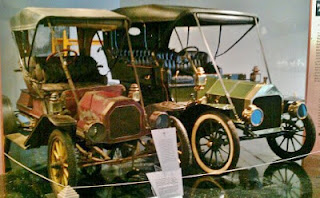 It is indeed the latter, as the pic above shows, and here's the link to more info...

Every time I've tried to drive a left-hand drive  manual-gearbox car, I've managed to change from 1st to top in one easy swipe on many occasions, but that's another story!

The idylls of Basil Kalashnikov...

Well, as mentioned by one of our best bloggers earlier this week, 'Bugger me'!

Mr Kalshnikov has been raging and shrieking to nobody in particular, why he wanted to have Ms Billary on his table (not literally I hope - Ed), and that now she has been kicked out, he has to put up with Mr Trumpet and his lovely wife, who accompanies him everywhere, and irons his socks!

Mr Trumpet has always argued that the bus lay-by issue wouldn't ever go away, well, not until next Thursday anyway, and now he is on the Wongs and Mains Committee, he can do what he damn well likes can't he! Mrs Trumpet has already ordered a new suit from Poundland, and says she is looking forward to Christmas as well, when Mr Trumpet has offered to take her on a cruise to somewhere or other, on his yacht, which is a second-hand version of the 'Saint Philip Green', another floating gin-palace.

PC Lumbersnatch burst into tears, at the news of Sid Trumpet's enormous vote, as did all the other luvvies, out of work actors, bad singers and crap bands, who rely on the sort of people like Ms Billary and 'Willy' Clinchton for making them rich, even though they have no talent!

For consolation, Mr Clinchton took Ms Billary back to his small home in Emmerdale, and she microwaved him his favourite dinner of grits, biscuits and gravy, and afterwards, he gave her an old pendant, but only once.

So everyone else is to blame for the Billary fiasco aren't they! Directly the small yob clique in the village heard via their various thickphones, they broke the local bus shelter and shouted at everyone who doesn't drink lager.

Sid Trumpet took a call from Mr Kalashnikov, but couldn't understand a single word he said, so put the phone down on him mid-splutter.

Willy Clinchton is still ashen-faced.
Posted by Sen. C.R.O'Blene at 6:48 am 4 comments:

Since Plod became 'emotionally' engaged in looking at various receipts in Ms Billary's Waitrose bag, it is understood that she has made some pretty shady purchases in recent months. It is clear that Mr 'Willy' Clinchton has a desire to enjoy the delicacies such as sausage rolls (you're getting too close - Ed), tartan cackleberries (do you mean Scotch eggs - Ed), and also raspberry ripples. (WHAAAT - Ed).

It is clear that her 'slots' with Waitrose have coincided with a spike in bad traffic conditions in Sodden Prickney, and that Plod are understandably miffed that as the traffic lights are out of sync for the fourth time this month, the seventeen lorries of comestibles have clogged up the system yet again!

Sid Trumpet has immediately seized on this information as evidence that Ms Billary knew about the proposed bus layby all along, and that her partner Willy was also in the ring! Mr Trumpet has now produced more evidence that Ms Billary is guilty of conniving with the Sodden Prickney Highways dept so that her constituency office has in effect, a personalised parking space right outside, and she doesn't have to wait in the rain while Mr Clinchton goes and fetches the motorcar.

PC Lumbersnatch has been patrolling the area for a number of years, and has also noticed that the Waitrose deliveries have been making deliveries on a regular basis, and he wonders why. (PC Lumbersnatch leaves all his shopping to Mrs Lumbersnatch, who is a superviser of sheets and pillowcases in Sodden Prickney's Model Steam Laundry. She is also a distant cousin of Miss Newt, and her involvement in this farrago will become clearer, when the rental deals on her 560,000 retail emporium have been completed with Mr Trumpet and his advisers, Clegg, Twillit and Twonk).

Mr Basil Kalashnikov has been seen running in every direction and yelling 'Sod everyone', for some reason only known to himself, but it is likely that he was dead keen on getting Ms Billary on his committee, (and maybe on his couch - Ed) as he rather fancies her rolling eyes, which he puts down to ecstasy. As Mr Trumpet has now taken the lead in the proposed election to the Ways and Moans Committee, Mr Kalashnikov will probably have to endure several years of hatred and despair, and most citizens of Sodden Prickney who care a monkeys, think that he deserves all that!
Posted by Sen. C.R.O'Blene at 6:15 am 10 comments: