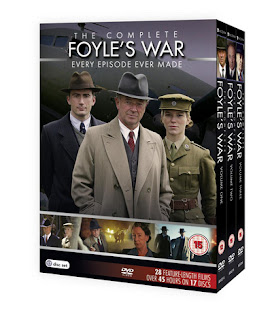 As most good people know here, we just don't bother with the tripe served up by the BBC any more, and prefer to watch our own DVDs as and when we want to/are awake/feel like a laugh etc...

The latest addition to the library is the complete series, and as the progs were made for ITV, commercially produced, not funded by telly taxes to give 'work' to failing 'actors' and thick presenters, it is indeed an eye-opener as to how damned good the three main characters are protrayed here.

Hastings is really my home town, and while much of it isn't shown (just as well - Ed.), I didn't really know the Old Town very well (except for 'The Pump House' in George Street, but that's another story), the drab wartime scenes are still as vibrant and evocative as when the first series came out.

Last night's showing (The White Feather), was the second programme in the whole series, and as the adverts are now cut out, the plot continued unabated for a good ninety minutes, and was worthy of much acclaim.

Well worth the few folding plastic notes too...
Posted by Sen. C.R.O'Blene at 5:41 am 7 comments:

The jewel in the crown... 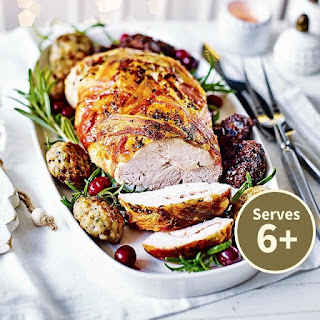 Off to Waitrose soon to collect one of these...

YD and SIL had one last year, and judging by the size of it, this chap will last us until about April...

The good grocers started by Mr Wait and Mr Rose all those years ago have been doing some pretty good deals this Christmas. There has been a constant stream of 20% off vouchers popping up, and these make the Christmas cheer shelf of various tinctures all the merrier, with some decent single malt appearing, where in the past it's been the every-day tipple!

Which reminds me, Happy Christmas to everyone who calls by here, - we're with all the family on the big day, and it'll be a riot...

Here's to a lovely lady chum..

This is for you, Ro.

We worked together, laughed together, smoked and drank in 'The Bell' together, and while you and I were never ever going to be intimate friends, I thought the world of you. I'm so sorry we lost touch and that I found out far too late that you were so ill.

Whatever happened to Munster... 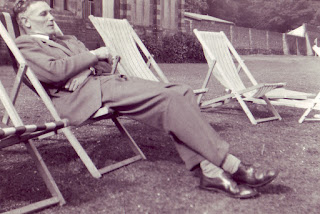 Many years ago, when Scrobs was at school, this great schoolmaster called Patrick Evans had been at Cambridge University, and often quoted the various colloquialisms and once revealed how a 'sconce' was performed if an undergraduate mucked up the long Latin grace before meals.

One of these 'sayings' was this: -

'Will you lend me your Ulster?

'Connaught, I will never be a Leinster'!

Now, everybody knows that these are Irish Provinces, and only this week, I was reading a lovely book, 'Sorrell and Son', by Warwick Deeping (with a triple-Kleenex ending), but during the yarn, written in the early 1920s, Stephen Sorrell is wrapped up in an old 'Ulster' while working in the garden of 'The Pelican' Hotel.

I always thought an Ulster was a big long scarf, much favoured by students back then, but it turns out to be a big coarse-thread overcoat, with a belt at the back.

Obviously, those bright sparks at university back then, came up with the sort of statements as described, but I've never been able to trace the origin of this particular one and of course, still wonder why Munster wasn't included!

Is there no end to this interminable search for our history...?

I was saddened to read that Keith Chegwin has popped off just now.

Years ago, he was a shining light on pretty dire television for budding children, and our two daughts loved his programmes. He was so much better than the bland, squeaky, gender-neutral stuff they squirt out these days, and he made everyone laugh - including me, because I could easily sit with them before they went to bed, and laugh and enjoy the antics with them.

I didn't know he had a problem with the bottle; it makes no difference to me, most people do, especially when they spill it, and anyway, I always go to sleep well before I have a problem, which is a fail-safe as far as I'm concerned.

Just yesterday, I was playing a tape (remember them) in the shed while doing some carpentry. It was this here below, so here's to you, Cheggers old chap, you were part of my kids' childhood, and you were damned good at what you did! Sleep well.

What goes around, comes around...

Further on from the previous post, I thought it would be self-satisfying to create a seminal post which will be on the internet forever, and therefore make a couple of points available for everyone to see forever.

Here's a pic of a certain Miss Sutton. She's the one with glasses. The other teacher was Miss Austin, and apart from having a hairy bum, because, when we were naughty, we had to sit in front of her desk, and of course, the view wasn't that magnificent... But she wasn't a bad lady, and we all thought she was OK. 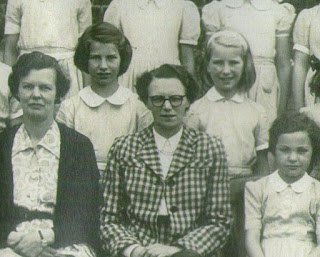 Not Miss Sutton. She had a reputation.

She thought the world of her two favourite boys (three of us - except me) in her classs, but only two got the attention.

I'd been in hospital for six weeks with a leg re-structure. It was an infantile problem, and while it was not pleasant, I still managed to play rugby a few years afterwards, so thank you Mr Bintkin (Royal East Sussex Hospital, Hastings)  - you were a grand surgeon back then! (Why did that third stitch go so wonky...;0)

When I eventually got back to my school, there were just the three chaps in my class with many more lovely girls, but Miss Sutton just left me alone, ignored me and concentrated on her two favourites. Derek and Richard - both good friends of mine back then. At one of her evil lessons, I easily remember her taking them both to one side and giving them some plaster of Paris to make plates out of. I'd spent six weeks in the bloody white, hard stuff, and knew what hell it was with the itching, the unease, and the pain when it all came off, so that bitch could have at least acknowledged the fact, but no, she chose to ignore my cry.

What an absolute bitch! I hope she died in hell like many other enemies, but why on earth should a nine-year-old have to put up with that sort of shit?

'Bye MISS sutton. You hated me for some god-for-saken reason, and so here's your legacy; Scrobs still remembers how unkind you were, and its written down forever, here, in Michael's very own blog! 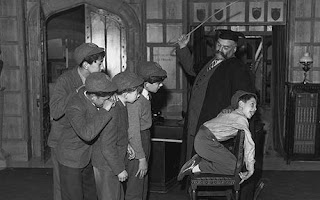 Yesterday, I was asked - with many others - to go to our GC's school, and answer questions on what it was like for us to be children.

It was a good craic, and we all enjoyed talking about no mains water, toys and freezing cold bedrooms etc.

One of the teachers in our three girls' fabulous little country school mentioned that when they were cleaning out the staff room, they found a cane! She asked the assembled GPs if they had ever had a session with one and all the hands shot up, including the ladies!

The other lady on my table said that she'd been beaten with a strap every day for being left-handed! She was Scottish, so that may have been the reason, but what bastards these teachers were back in the forties and fifties!

I got to thinking on how many ways we were all corporally punished back then...

One master used to make a fist and hit you on the back of the head. It was known as 'Joe's bonks'. A chum had fallen down the stairs and had his head wrapped in bandages, so Joe just twisted his arm up behind his back! Absolute bastard. Luckily, I did get my own back when by chance, I met him again a few years after I left school. We were all sitting in the late summer sun on one of the first rugby days of the season, in the old stand at Brighton RFC. He was playing for Old Alleynians.

We had a sort of embarrassed chat, and when I took my leave, he asked me to remember him to all the others. My 'mild' response was 'Er, I don't think so...' and he showed the first remorse I'd ever seen.