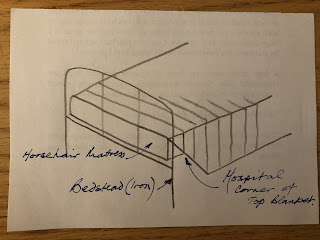 Back in the old school days, one of the first tasks a small chap had to learn, was how to make his own bed.
Up to then, Mothers used to make beds at home, deal with the untidiness etc., and generally make the bedroom tidier than an eleven-year-old would leave it, so it was a bit of a shock to be told how to make my bed on the first morning away from home!
Apart from disentangling various sheets and blankets, rugs and sometimes slippers, socks etc., the job was a necessity, as the tidiest dormitory each term was rewarded with a special tea - including sanwiches made with the delicacy if the year, sandwich spread!
So the Hospital Corner was geometrically engineered to the Nth degree, with an angle of exactly 45 degrees at each bottom corner. The counterpane, (Bill Bryson's nemesis), was then left to hang loosely along each side of the bed, until it reached the pillow, where it was folded neatly down.
This ritual stayed with us all in each dormitory for several years, until emigration to another place at thirteen years of age meant that all those skills were lost forever, as the new regime demanded a full side tuck-in, and the elegance was lost forever!
Posted by Sen. C.R.O'Blene at 6:35 am 2 comments: 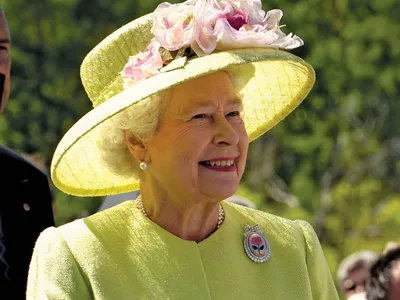 So how do you grieve?

Senora O'Blene and I were just discussing this. One needs to grieve a real person's passing, but without the dross of all the hangers-on being exemplified by the awful BBC and other channels.

We don't need to hear about what the peripherals get up to, our late Queen is the star of the show!

We wonder where her statue will be situated? Outside Buck House maybe?

Old Nick on the grasp... 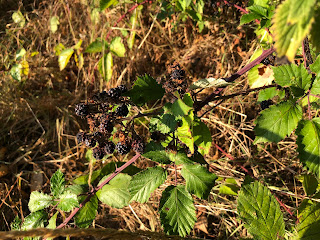 It's been quite a good year for blackberries, despite the hot weather and very little rain, and I've picked around six pounds and they're being carefully fermented in the time-honoured way!
There is a downside to these 'profits a prendre', as on the first foray into a new area covered in brambles, I crashed my bike on the rough track, and received several cuts and bruises for my trouble, but the effort was worth it, and only the mental scars remain...
At the end of the season, the berries start to fade and drop off, and it's the time when my mum used to say, 'The Devil's got them'! So we're about there now!
Posted by Sen. C.R.O'Blene at 8:49 am 10 comments: