Just recently, I learned that every Desert Island Discs programme is available for free, on the BBC website.

I used to listen to many of these several years ago, because I would be driving up to London every Friday. Of course, some of the subjects were way over my head, some were very funny, and others were particularly good and very interesting.

One particular programme leapt out at me at the time (1984), as things were very different for us back then. It was another era!

If you have a little spare time this weekend, the one mentioned below is well worth a listen. Don Mccullin comes across as a very deep and thoughtful sort of man, and the way he describes what he did as a war photographer is amazing, and his way of describing scenes is just as good as his photography. Roy Plomley as always is superb, and says very little, thereby letting his subject put his reasoned argument across so well. He was also on the radio last weekend, talking in the same measured way and I always wanted to hear this programme again! 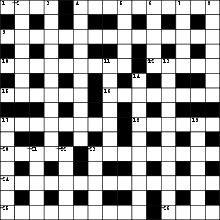 Many years ago, we used to take the dead tree press, and when train journeys called, I'd tackle the cryptic crossword, usually being defeated by several ingenious clues, but feeling pretty proud of myself by London Bridge!

Since packing up with the Daily Telegrout, and saving us a fortune, Sudoko took over as the pastime of choice, and Mrs Scroblene is an expert, usually finishing several each day.

Just a few weeks ago, I thought I'd like another crack at some of the crossword puzzles that I could attack with some success and I bought a book of DT Cryptics, only to find that I've lost the plot to some extent! I'd forgotten some of the twists and turns to get a word right, I didn't see anagrams as easily as I used to and the signals just seemed invisible!

But at long last, the old sequences began to dust themselves off, the reasoning became less fraught, and the answers in the back became less read...

So we're getting there! Chatting with a chum the other day, I mentioned a classic clue from the seventies which stumped people for ages 'Geg. (9,3)', and she came back with an absolute barnstormer, which I struggled with for two weeks, then to retain some sanity, finally plugged in the crossword solver! Even then, seeing the answer, it took me some time to realise how it was the result, because it is so clever!

Here it is, and would either of the readers here please wait a few days, so the other one can have a crack at it!

Wednesdays - the days of reckoning...

Block and Quayle's emporium differs from the establishment run by Elias Sagtrouser, in that they have displays of floor tiles whereas Elias doesn't bother with such things, preferring to deal with real builders who know what they're talking about!

The telling point of the successful visit, was that we bought exactly what we wanted, and also, because it was a Wednesday, we got a 10% discount because we're over the magical age of 60! That's the policy and the place just heaved with grey hair!

The checkouts all had long queues, so we headed for the self-checkouts with some trepidation... Luckily, there was a very pleasant lady on hand to help, as to a normal person, there was an awful lot of mystery being unraveled on those infernal machines! You need a degree in applied ballistics to work one of those, and while she helpfully rushed from till to till, and popped our bits and pieces through in a flish, I managed to get some light banter going with her, and mentioned how well she was doing as they were all so busy!

And the music was all sixties rock music! Good idea that for the greys...
Posted by Sen. C.R.O'Blene at 6:43 am 16 comments:

BPs and I were discussing submarines yesterday, as well as partaking of a few sherberts and enduring several laughs, so here is the antidote...