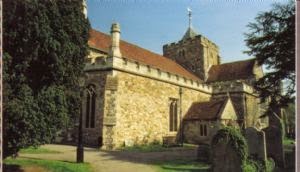 Mrs Scroblene and I have been married (to each other of course, don't you know), for forty-two years today!

It's quite an enigmatic number isn't it, 'forty-two'. I mean, there was a great show called '42nd Street', Rowan Atkinson did a sketch where his North East football club were losing thirty-seven - er - nil, so you can add five to that, I mentioned this fact three years ago, when we were celebrating thirty-nine years, so that's another huge fact to ponder, and so the list goes on...

It was The Mermaid afterwards, and plenty more after all that... 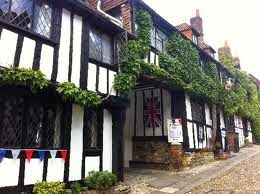 We're going to my Formation Drinking Establishment for lunch, just to recall that all those years ago, my best man, Bob, picked me up at my old home just a few yards down the road, and whisked me off to Rye Church for the big event! They also do a super fish and chips for pensioners, so romance is definitely alive and kicking!
Posted by Sen. C.R.O'Blene at 7:46 am 12 comments:

It was twenty-seven years ago today, that the Great Storm caused absolute havoc here.

We lost power for several days, and resorted to eating in the greenhouse, with comestibles cooked on a makeshift barbeque! Scrobs was pleased to have his picture taken doing this, as cooking has never been his strong point, and the picture top right shows a youthful bloke in his favourite jersey...

Here's my car, which suffered more than somewhat from a falling wall opposite the old 'Turrets'. 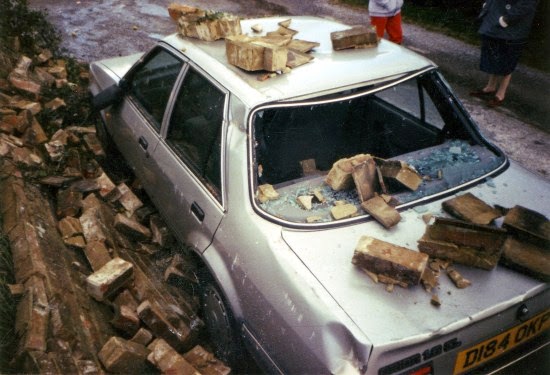 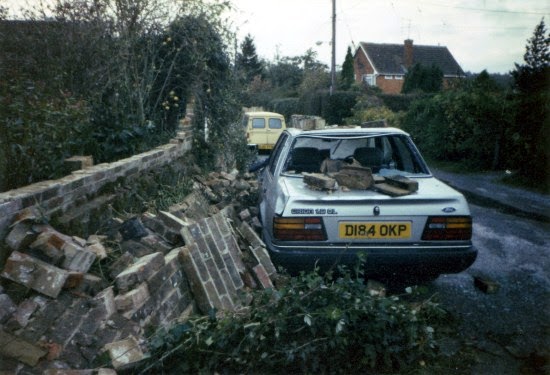 Luckily it was a hire car, as I'd only just started a new job in Tonbridge, but it all took a bit of sorting out. My favourite Deluxe A-Z was soaked, but I didn't have the heart to chuck it away, so it's still intact, and used regularly! The chap parked behind me came off far worse, as his Mini was as flat as a pancake, but Mrs Scroblene's Mini, parked further down the lane was untouched!
Posted by Sen. C.R.O'Blene at 5:50 am 8 comments:

Seeing Thud's marvellous staircase in his Bothy, has just reminded me of something that happened to Scrobs, only a couple of months ago.

When I went to a funeral, which was due in the afternoon, I left home early to visit the home town of my grandparents - Letchworth, as the town is only a few miles from where I wanted to finish up, and also, I had yet another pilgrimage to make, but I'll talk about that later.

I had three addresses where my grandparents had lived - all houses or shops built by my grandfather. While staring at one particular house, I just couldn't resist the urge to knock on the door, and I'm so glad I did too! The door opened, and when a pleasant gentleman looked at me enquiringly, all I just had to say was ,"My name is Michael, and my grandfather built this house in the nineteen-twenties"!

There was a pause, and then a huge smile came over his face, and we immediately began to chat on the doorstep about the house and how his wife is on the historical societies etc., and she would love to know more and then he even invited to show me around inside! Now Scrobs would always decline, as privacy is privacy, but he insisted, as I'd talked about all sorts of features of the house, which nobody else would have known, and so we compromised and just stood in his hallway, still talking.

He explained then, that when they'd bought the house, it had been 'Italianated', and the original features had been covered up, and botched pretty badly, so they'd spent a lot of money stripping away the cheap tat, and restoring the building to its original state, including building a sizeable extension in the same style. Letchworth was developed and built to very strict guidelines, with appointed architects complying with these rules very well, such that there would be a feel of community and well-being about the place, even though the history only goes back to the start of the twentieth century!

And then he pointed out the staircase.

I'm afraid a huge lump appeared in Scrobs' throat, as I experienced the feeling of something like 'deja vu', without the 'deja', or even the 'vu' for that matter. But I just 'knew' this staircase, although I'd never seen it before! It was the very one that my grandfather had built, and, my grandmother, father, two uncles and two aunts, had all walked or run up, or tripped up and down countless times all those years ago, and the sight of the nineteen-twenties joinery and design, just made me feel so much closer to the old family, than I had in years! It isn't really a very big staircase, but it has the sort of character which I love, with several dog-legs, kites and a newel post which was so well designed at that particular period.

I didn't go round the interior of the house, as the owner had been so kind even to invite me to talk about the place, but I managed to amaze him by asking, "Is there still a fish pond round at the back"? He looked at me aghast, and said that indeed there was, and how did I know about it, and he took me round to show me an area, which was just as one of my uncles had described it, although the pond was empty, as it was being repaired! My uncle had told us that they'd built the pond from: -

"Three train wagons full of Kent Rag (stone) and gypsum was used to make rockeries and paths, and a goldfish pond about 4’6” x 10’0” x 4’0” deep and concreted. I have learned since (that) this was about four times as deep as it should have been as the leaves from the trees got in it and the decay reduced the oxygen, and we couldn't keep fish alive in it! The cat regularly fell in too, trying to drink out of it!"

...and it was all still there!

But to see this wonderful staircase was an experience I'll always treasure, and Thud's masterpiece will certainly live long enough for someone to tell this same sort of story in ninety years time!
Posted by Sen. C.R.O'Blene at 9:44 am 8 comments: