How old is an old friend...

On Wednesday, I went to meet an old chum I'd known since the fifties. We were at school together.

After a couple of hours of delightful banter in the quiet, friendly pub, we shook hands and agreed that a return match was going to be a necessity.

On the way home, I was musing how often something like this happens these days, and chums meeting up was becoming a rarer occasion. I hadn't seen Tim since he'd announced that he was retiring, and was going to live in France with his lovely wife. When I saw that, I just ticked off another mate I'd probably never see again, but what a surprise to learn that it wasn't what they wanted, so they came back home to live, and are now very happy with their lot.

Back in the sixties, after we'd gone our separate ways, I lost touch with so many people, as some went to Australia, some to South Africa etc., but really didn't want to do any of that, as I probably didn't have the nerve, certainly didn't have the money or qualifications, and above all, really liked it all here, especially in London.

How all this has changed. Mrs O'Blene and I decided long ago that we'll never go to London again, especially after the 'manic mare Khan' is sitting there making a disaster-zone of the place, so it's back to the roots of the village, and it'll stay that way!

So, back to Tim. After losing touch, I was one day reading 'The Estates Gazette', which is required reading in property circles, and suddenly, there was a photo of my chum, explaining the vagaries of some deal or other in The City! A phone call later, we thought a good glass of red would go down well, and it became a great regular meeting of minds for the eighties. So that's a twenty year break from school days.

We tried doing some business around 2003, when things were going downhill because of Blair/Brown, and then came mutual retirement and Tim's great escape, so now, after all that time, we get back to laughing at spidery writing in my collection of the old school mags, photos of great contemporaries, memories of unrequited lust after the assistant matrons, the joy of seeing notes describing a sports success/failure etc., and it all feels bloody good!
Posted by Sen. C.R.O'Blene at 7:25 am 4 comments:

Several years ago, Scrobs was living and working in London, in an office in Old Queen Street, Westminster.

Being pretty well penniless as usual, lunchtimes in the pub were almost non-existent, and a 3/- Luncheon Voucher just covered a cheap sandwich and some sort of orange drink from the little shop over the road.

But what to do with the down-time after the quick disposal of said comestibles (about three minutes)?

Well, as Damon Runyon would say, 'A story goes with it'! And it did!

A few years before, my dad had given me a copy of a paperback version of some of Damon Runyon's short stories, like this one: - 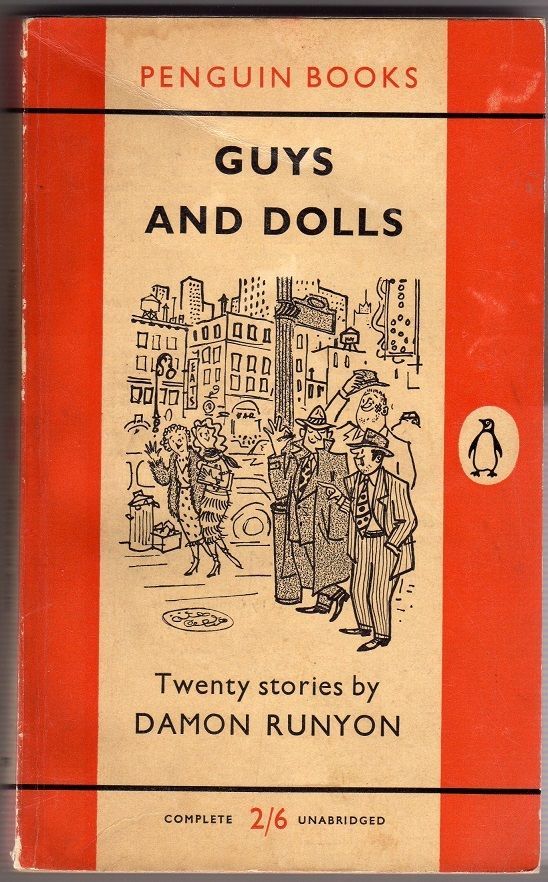 He was particularly amused by one story, 'A piece of pie', and it being very funny, the seeds for more were sown!

So, with 57 minutes of a lunch hour left, Scrobs decided to find out if there were any more books by the same man. It became a bit of an obsession, and talking in the present tense (like the stories), became a little boring for chums! It takes about fifteen minutes to walk to Charing Cross Road from Old Queen Street, and I used to stride out up Whitehall across Trafalgar Square and pore over the shelves of every second-hand book shop I could find, and there are quite a few!

One day, I was in one of the older shops, and asked the owner if he had any copies of any of the books, and he called down to his chum in the basement, who called back immediately. 'Got 'Runyon from first to last', he said. 'Ten bob'? So another three lunches went south and money changed hands. I remember him smiling and calling out as I left 'Harry the Horse to you'! Luckily I had some 'wit' left and came back 'Nicely Nicely', and we both had a huge smile on our faces, although his was, of course, much older!

A few weeks later, when I'd saved a few bob, I started the search again. This time I started at Foyles Bookshop, which is probably the best known bookshop in the world. Back then they had floors and floors of second-hand books, and all in various heaps, on hundreds of shelves, and stacked on the floor everywhere. It was an Aladdin's cave of the written word.

It took me several weeks of searching for the other main book, 'Runyon on Broadway': -

...and I'd got nowhere in any of the heaps, shelves, dusty corners etc., and was getting more than somewhat despondent, especially as I'd spent weeks searching for this book, with no result!

So, in final resignation, a weary Scrobs approached a friendly assistant, and asked, 'Do you have a second-hand copy of Runyon on Broadway', please'?

The assistant immediately looked up and around, and pointed to a shelf, 'No, but there's a new one in the violet cover over there'!

Scrobs experienced several emotions at once - dismay, relief, fear of the price of a new book and fury at not knowing that it was back in print so I had to buy it! It was far too much money back then (£2.10 - we'd just gone decimal), but what an absolute treasure to own! It's still in pride of place on a shelf of real books at home, having been read and re-read several times, and it still has the original dust cover. I think I'll eventually leave it to someone in my will as it's so precious!
Posted by Sen. C.R.O'Blene at 6:06 am 8 comments:

Since we gave up watching just about everything on TV, especially the woke BBC rubbish, we've been looking around for alternatives!

Now nobody likes an evening by the fireside with a good book and a tincture better than The O'Blenes, but times have changed since our old VHS machine stopped working,  - well, it didn't actually stop, it's just that there are so many cables to connect it all at the back of the set, that we needed a building loan to extend the lounge, so we had to move into the 21st century!

So now, on our third DVD player (the most recent is subject to a dispute with LG, who are not our favourite friends at the moment), and on good advice from a Daught, who is exceedingly clued up on all matters IT, we invested 30 splonders on a Chromecast chip for the TV.

Wow! What a difference it all makes! From the comfort of the very same armchair, armed with an Ipad and a JRT beside, the whole free world is at one's fingertips, and the sky's the limit - (to mox mitafers)!

Flicking through old faves with great comedians like Rik Mayall and Ade Edmondson, one realises that we really don't need very much more, except perhaps a few real DVDs which is understandable, as the production will be exceptional, but whooa, this is all so new and easy!

And the song at the top?

Well, after an hour or so of hilarious clips, I just mentioned to Mrs O'Blene that she could even hear the first record I ever played to her, nearly fifty years ago! And it was ever thus!

Around this time of year, Scrobs recalls a few things which happened, and what happened later! This post seems a bit miserable, but there's no reason for it, other than I've learned something interesting - again, and maybe it's all linked! In fact, things are also pretty positive around now, with February becoming the new March, thanks to some kid whose parents told her to tell the world (I haven't stolen your childhood dear, your problem to get over is to understand real grown-ups), and plants, flowers and greenery start to re-appear!

The other evening, I was tootling around on YouTube, as a fireside malt and a pair of earphones is rather a pleasant occupation about then, and for no other reason, I watched the excerpt from the flick 'Philadelphia', where Tom and Denzel get together to discuss a few things...


It's an incredibly powerful scene, and part of a learning curve for Scrobs, as he was watching the film with daughters at the time it came out, and hearing their views on Aids as well, which was enlightening.

So, while listening to Maria Callas, I checked the 'comments', and someone had said that he wondered if anyone had ever heard anything about 'Andre Chenier', before the film made it popular. My first thought was 'pompous arse', but then thought again, and realised that yup, I had never heard of that particular opera, so a further few clicks were necessary, and then a whole lot of memories just tumbled out, such that the tincture glass needed a refill of some proportions.

The original theme of 'Streets of Philadelphia' by Bruce Springsteen is all-time favourite, mainly because I reckon such a simple but powerful opening drum and synth - C to Emin - combination
shows real class...

I was once coming off the M2, on the slip road up to Brenley Corner, to get to Canterbury, and when this theme started, in a few moments, I suddenly realised that as my mum was so lost in the arms of Alzheimer's, I'd never be able to talk to her again! It wasn't a happy thought; the rest of the journey down to the city was pretty miserable, but she was in safe hands and there you go!

The final scene of the film has Neil Young doing what he does best, and this song is also just as heartbreaking...

So there we are, Scrobs now on a third Glenlivet, (large), and still thinking about the 'comment' on Andre Chenier! Why not go the whole hog then!

Just watch this final scene from Umberto Giordano's opera, and feel, like I did, that it really is time to come down from the ceiling!

I'm glad that I saw all this at the same time. Thank you 'Commenter'!

I'm also glad that it wasn't a Tuesday or a Wednesday, when Scrobs forsakes all things tincture, to help a past weekend recovery, and look forward to a new one!

Better out than in...

And about bloody time too!

The fading old farts of the 'elite', with their mouthpieces gabbling inanities through the biased BBC and the awful Grauniad, have all had their day, and good riddance!

Normal citizens can now heave a sigh of relief, and start to get Great Britain back on track!
Posted by Sen. C.R.O'Blene at 7:25 am 9 comments: