It's Tuscan Tony's birthday on Sunday, and I want to be one of the first to wish him and all the Tuscan hordes a very happy day!

He has said somewhere how old he is, but who cares; he's always there, in the thick of it, and the man still needs to run a business in his spare time!

He also used to live in one of my favourite parts of the country, and therefore belongs to the elite crew of Scroblene Turrets Good Guys!

I know how you feel Chum, and have a large red on me! 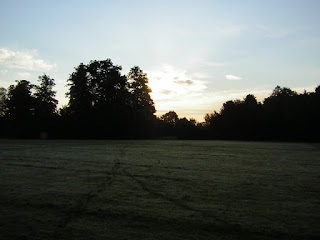 These mornings, when it isn’t raining of course, I usually get the pupling out for an early walkabout, and we venture across the local fields for a stroll in the sunrise. (If it is raining we do the same, but I tend to groan a bit, and somehow the walks last that little bit less; like half…)

I sometimes take the old 'Box Brownie', and caught this pic, which sums it all up really.

Elder Daught added to the present list with a huge box of balloons, and a cake and sweeties! Plus a load of music to listen to when I'm feeling good. We still chat regularly about the 'Big Concert'!

She'd got together with Mrs S and collated a huge album of 'This is your Life', and it is an absolute treasure! Slight moistening of the aging Scroblene eyes there...

Also, I'd always wanted to relive my growing days with my old Meccano set, and had mentioned this once or twice in casual discussion. So, I'm now the proud owner of Sets 2 and 4! Plus some goodies! I've already got the the Magic motor to drive the steam engine., and will attempt the Telpher Span when Mrs S isn't looking!

Younger Daught also gave me a CD of the music we both love. I'm listening to this now, and there are serious tracks I remember hearing all those years ago when her bedroom door was closed, and she had her own world to start living for.

(Relevance to subject matter will only be recognised by those who know the song…sorry…)!

Still reeling from the Great Concert at HQ, I now realise that the ‘Big 60’ occurs tomorrow, and I am celebrating for the next few days with Mrs S, our two girls and their men folk.

In an episode of Father Ted it is suggested that July 19th is the day that the Ice Age ended. I rather like that…(Mrs Doyle, thanks for the hat tip and the sandwiches…’They’re egg aren’t they…’)

I share my birthday with A.J.Cronin, who wrote the classic story ‘The Citadel’, (I used to go to a pub in Acton, - regularly - and once met John Welsh, who played Merriman in The Duchess of Duke St., and he was rehearsing a part in the play of the book. We had a long friendly chat, and he was a charming, quiet man. We had to watch the play of course, and it was especially good).

Also born on the 19th July are Ilie Nastase, (who shrieked at everyone long before Connors or McEnroe), Vicki Carr, (who used to bear a striking resemblance to Mrs S), and my guitar hero, Brian May of Queen - we are the same age to the day. It was he who started the ‘Electro-K Bass’ desire for stardom and his playing astounds me every time I hear that Red Special’ guitar.

So, to change the words of Auden’s poem a little…

Restart all the atomic clocks, connect the new BT Internet telephone,
Get the dog barking and prancing around with a juicy bone,
Turn up the keyboards and with Phil Collins on drums
Bring out the bottles, let the Family come!

And it will be a great day!

PS. I already have my Senior Rail Card, will get my eyes tested next week, and the next lot of pills are buckshee…!

PPS. The morning after I got home from Twickenham, I got a letter saying I would soon be eligible for a winter fuel allowance too…
Posted by Sen. C.R.O'Blene at 4:52 pm 12 comments: 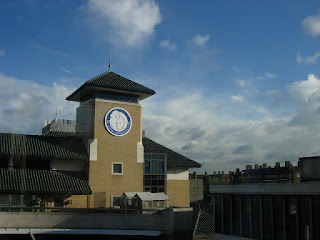 Lilith is most upset about Electro Kevin hanging up his router. I have to agree. A.A.Ayscoughe-Hussey was in (temporary) mourning for the sad loss of Marmaduke, and Babel now requires a passport and an inside leg measurement before you can log on to be told you can’t!

Oliver Gosling retired to Market Harborough, PC Coker is now retired and living near Bognor Regis, and we’ll never hear Legge ring the bells again. The place is becoming quieter; the walls whisper and shuffle from room to room… 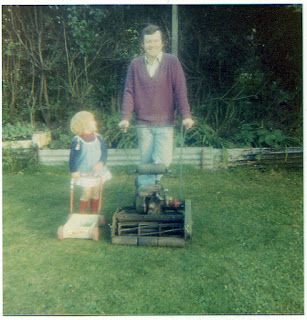 Genesis, at Twickenham – Giants in The Cathedral!

A long boiling traffic crawl through Wandsworth,
2 enormous Smolensky’s burgers,
Several cooling drinks, and another one…
85,000 aging (and not so aging) enthusiasts,
170,000 arms waving, pointing and clapping,
No rain (under cover in West stand – well planned that Girl),
5 fabulous musicians, giving their all…
A multitude of grey hairs raising on the back of the neck during ‘Cinema show’, (Not as many as Tony Banks, Mike Rutherford, and definitely more luxuriant than Phil Collins; and we all loved them for being there still…)
800million decibels of pure pomp rock power spreading so much goodwill everywhere,
4 very sore hands from all that clapping; two sore throats from knowing lots of the words, four sore feet from stamping and all the walking to and from the town;

One late middle-aged idiot scrabbling around on his hands and knees after breaking his glasses during the customary overhead clapping in ‘Invisible touch’. Did anyone spot someone having an utter panic moment in Block 15? I found the lens a yard away when all the lights went up for a split second…(Jesus he loves me)!

Thank you so much M, it was a fabulous day; you did your Dad proud! This is the picture I promised you! You’re now a blog star!

Update…Glasses mended free – couple of notes to charity!
Another update…If you think this picture was taken yesterday, think again…!
Posted by Sen. C.R.O'Blene at 2:22 pm 26 comments:

This Sunday, Elder Daught is treating me to a trip to Twickenham to see the best band ever! It’s for my 60th Birthday, later this month.

I was quite a late convert to Genesis; not really buying anything until ‘Duke’ came out in 1978, but I still remember going into the record shop in Hastings in 1973, and asking them if I could buy a record called ‘I know what I like’. The young chap kindly showed me the album ‘Selling England by the pound’, but sadly, £3.50 was beyond our newly-wed’s budget, and I couldn’t afford it!

Since then I reckon between us, we’ve amassed most of their tracks in some form or other. Elder Daught actually wrote and produced a half-hour radio programme on seminal Genesis works like ‘The Lamb lies down on Broadway’ as part of her degree. We still rave over Youtube showing ‘Cinema show’. Our favourite is ‘Vancouver’, but I will always play ‘Duke’s end’ at full blast in the car, and feel drained as always!

Their big stuff which was originally recorded with Peter Gabriel and Steve Hackett is bound to raise the roof. The real visual one is ‘I know what I like in your wardrobe’, and they can reel that one out for ages and ages…(I only wish they would do ‘Lilith’; then life would be complete…)!

We both went to Knebworth in 1992, and it was so well attended that it took us five hours to get out of the car park! Earls Court a few years later was easier; but as there were only two members of the original line-up, we didn’t really rate the evening.

Elder Daught emailed me the news of the Twickenham bash within hours of it being announced. She sat on the phone for half an hour when they went on sale, and got the best seats in the house. The rest sold out in an hour!

What a fabulous way to celebrate the big 60! Sorry to all you younger brigade who don’t want to spend five hours in the company of a boring old fart though…
Posted by Sen. C.R.O'Blene at 4:17 pm 19 comments: