Big gathering of government 'advisers', not many deals done...

For the last couple of days, I’ve been at the Thames Gateway gathering at Excel, where I’ve been trying to extract any sort of business lead to create a new property deal which would raise the prospects of my ever being able to retire.

Not much chance of that, if what seems to be going on these days is a measure of the state of the industry. Apparently Margaret Beckett was making the ‘keynote’ speech, but I didn’t bother to listen to that.

The house builders are putting on a brave face, and so are their consultants. The building industry is all but grinding to a halt and this means that all the suppliers, producers etc are being hit hard as well. The agents are all scratching their heads too, which is unusual.

But an overriding factor of all this gloom is the huge bulge in the number of government appointed organisations to promote/advise/consult new development. Add the local councils, and you finish up with a big wave of people with rules and regulations, which eventually restricts and stifles any entrepreneur who is willing to risk everything to make a property development work for a profit.

I usually try to avoid talking with any of the government reps, as they’re usually commercially naive, incapable of saying anything which doesn’t include their own jargon (or more likely, acronyms), and swan around as though they are important. The one conversation I had with a bored government quango man was inconclusive, uninteresting and summed up by his hanging around for another free drink on a stand (which was run by a private business of course).

There were one or two shining examples of councils trying to get something going, but the majority will always stick rigidly to the rules and eventually cause the previously interested party to give up and go and do something else.

So, to alleviate the gloom, I’ve managed to meet the stunningly lovely lady again (coat removal expert from last year); avoided every Wii game going for fear of making a complete arse of myself, spent several happy minutes with a glass in hand, polished off loads of crisps and felt sick, missed my train (twice), been to a function which was billed as a photographic exhibition, and didn’t see one picture, had a good group rant about the failings of Gordon Brown, (which did look quite promising and could have turned into a riot), and fallen flat on my back on a tube train after someone removed the glass screen by the door just as it was picking up speed. Three kind gentlemen helped me to my feet, but it was really very funny and we all had a laugh about that!

Lils came out with a great new word recently, proving that she is indeed a world beating authority on the subject of observing an action and giving an old word a new meaning.

The Washington Post has published the winning submissions to its yearly contest, in which readers are asked to supply alternative meanings for common words. The winners are:

2. Flabbergasted (adj.), appalled over how much weight you have gained.

3. Abdicate (V.), to give up all hope of ever having a flat stomach.

4. Esplanade (V.), to attempt an explanation while drunk.

6. Negligent (Adj.), describes a condition in which you absentmindedly answer the door in your nightgown.

9. Flatulence (N.) emergency vehicle that picks you up after you are run over by a steamroller.

14. Oyster (N.), a person who sprinkles his conversation with Yiddishisms.

15. Frisbeetarianism (N.), (back by popular demand): The belief that, when you die, your Soul flies up onto the roof and gets stuck there. 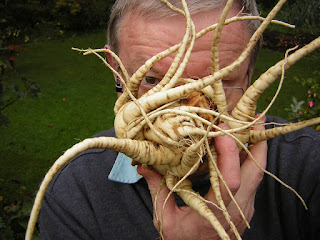 We used to grow parsnips on an allotment and one year, (after several years of mediocre results), the crop came in a staggering size, such that one of the brutes was nearly two feet long, and weighed several pounds.

The idea is that you plant the seed in ground which has not got any manure, compost, etc, and the growing tip has to burrow down to get what there is remaining in the soil from last year. It's the same with carrots too.

This year, we decided to buy just a few plants and give them a chance on the patch at home, where we knew the soil was kept poor from last year. In fact, it turned out that it wasn't that poor... 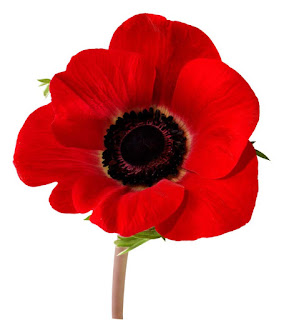 Watching the service from The Cenotaph on TV today caused the cynic in me to consider that all the people jostling in the queue to place wreaths and stare intently at the stonework, were closely related to the very people who started most of the wars and conflicts in the first place.

Why on earth we should be grateful for their patronage, God only knows.

As for the pasty faced politicians getting in on the act, well they just wallow in reflected sorrow, oblivious to how much anguish they continue to cause in war - and peace. 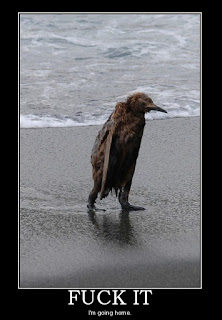 I don't really have a worthy position on this post, but in spirit, I'm with Old Holborn for his show today.

Being a late middle-aged idiot doesn't let me to get into too many more scrapes these days - mainly because it's bad enough trying to carve out a living under the Gordon Brownista Stalinista Disaster. We were due for; and took, an eye-watering hit today at the meeting I had to attend; right at the time all the good folk from his Blog were wandering away from Trafalgar Square...

So what happened? I even went to The Chandos, (a great pub BTW - home to several long and lucid discussions in the past and easy to aim for Charing Cross Station, as long as nobody treads on your fingers crossing The Strand...) at 10.15am, just in case I could spot someone who looked like his pic - no chance there although someone looking vaguely similar was wandering about, but he caught a taxi and was away!

So I had my disastrous meeting, and a few post-buggeration sherberts, and after a bit of self denial, revisited The Chandos around 3.45pm.

Sadly, there were no masks, several people looking like interesting drinkers, but no Old Holborn lookalikes and certainly nobody able to challenge the Magnificence (Prat version) of Downing Street.

Sorry Holbers, I really couldn't get there, but thanks to you and Guido, the case has been made. Well done that Man and everyone who ventured forth!