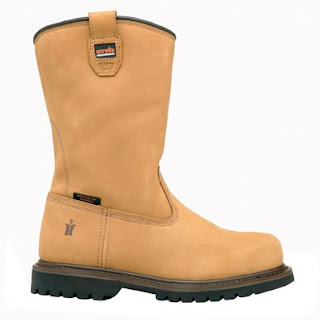 Some time ago, there was some general discussion about rigger boots here, and even the venerable Tuscan Tony joined in, so you can see how long ago the post was!

It's only recently, that I have discovered that these items of protective footwear have a mind of their own! I have two pairs, one of which is deemed waterproof, but isn't, the other is just bloody heavy, but warm. The non-waterproof ones are good for such deeds as dog-walking or light gardening, while the others are for heavy-duty work such as slab-laying, brickwork etc, because they both have steel toecaps capable of withstanding the whole weight of the EU's books on elfunsafteee, thrown from a tower the height of Babel...

But as Scrobs' legs get older, and less manipulative, it has been a bit of a revelation to learn a new way of walking in these containers!

You need to use the weight of each boot to swing your (my) enfeebled legs forward at each step. This entails walking at a much slower pace, and is the sole reason why some building contracts over-run, because if every tradesman or labourer on site has to reduce his or her walking speed, then a ten percent extra is to be expected on all labour rates, so builders have to beware the manufacturers of these boots, who are clearly on the case for other builder's claims etc!

You just cannot run in these contraptions; you need to get a rhythm of forward motion, with your sights on another couple of feet of ground, onto which the next boot clumps its weight, and this action continues, rather like Gromit does in one of those old flicks! It takes several seconds to stop walking when wearing these chaps, which may even account for some industrial accidents, especially if you are on scaffolding a mile high, and cannot stop before the rail at the end!

So all in all, doing the Rigger Walk is a phenomenon which is secretly with us, and possibly the most misunderstood reason why it costs so much more to build anything these days!
Posted by Sen. C.R.O'Blene at 6:54 am 6 comments: 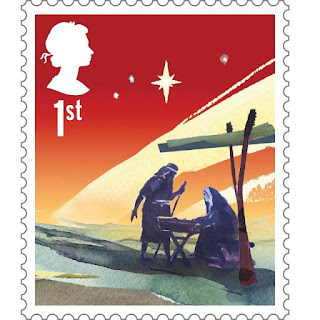 Nice to see Mary on keyboards and Joseph on vocals...

The bad news that Raedwald is moving away, and may not be on the side of the screen so often, is bad enough, but the really bad news is that Scrobs is set to continue until there is a need to shuffle off this mortal coil...

I'll really miss the daily dose of his real writing, most of which I agreed with, or perhaps I learned something, because it was either that, or the daily press, which I'll never pay for, and usually contained such rubbish.

I suppose his future posts will be more in line with - say Thud's, because he's going to do up an old farmhouse, which was an ambition of mine for some years until we realised that we were not really ever going to do such a dream...

Good luck Raeders, I hope you'll reappear, perhaps when you're on holiday!
Posted by Sen. C.R.O'Blene at 7:24 am 6 comments: 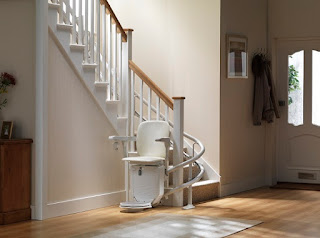 I've always thought that these feats of engineering were a real boon for anyone to get from one floor to another. The Stannah Lift allows people to stay in their own homes, and not resort to downsizing etc, and also will give the grandchildren something to play on when they visit...

Some years ago, I became so enamoured with the concept, that I wrote to the company asking if I could sell these things for them. They sent me a pleasant reply, but no, I couldn't, and my hopes of bringing good cheer to late middle-aged citizens - like myself, were dashed!

A good chum reminds me that Barry Cryer once said that he wanted to install a Stannah Lift, so that he could get upstairs in enough time for him not to forget why he wanted to go up there in the first place, and amen to that!
Posted by Sen. C.R.O'Blene at 6:59 am 6 comments:

The Doily Moil has this interesting article...

...and Mrs Scroblene and I have issues with this, as we agree that some places are just too noisy to enjoy a quiet plate of pasta or maybe a sandwich and a glass or seven of a nice Chardonnay!

There's one place in town which has a sort of sunken area in the seating area, where it's well understood, that if one is seated at a particular spot in this place, the sound of their voices is replicated elsewhere on the perimeter! I think it's the Spaghetti House off Cavendish Square or thereabouts, (depending on how many sherberts one has imbibed in the client's office before departing for the rest of the afternoon, or maybe the rest of the week, but I may be wrong...)!

Some respondents reported that they learned of several deals from whispered discussions, as they turned up on the cheaper tables with an amplification rather like that of an an elephant, or at least a mountain lion!

It's a long, long time ago, that I experienced this phenomenon, and also probably the last time I had lunch with a proper worked-for millionaire, so times have really changed!

Scrobs and Mrs Scroblene were walking round the village with JRT yesterday morning. We went past the pond and the church, and outside there were three chaps discussing some work they were about to do locally, so we all said 'Good morning', and carried on.

JRT took some interest in their big utility vehicle, which was a Toyota Hilux.

It only too a few seconds to recall one of the funniest adverts ever, so while I remember, here it is...