Upheaval at The Turrets...

Bit of a big time here – too much to happen in just two weeks...

· First cucumbers up and running

· Mrs S’s sister over from Richmond, Virginia for the celebrations

· Chance of the biggest hotel site we are chasing for development becoming reality – last bit of work before I pack up the company mouse.

· Finding suitcases in attic – some still had the old Italian labels...

· Arriving at hotel in snow storm to find Younger Daught has champagne and sandwiches for us – all in our room – and also the very same operations room from where we’ll go to the ceremony. Poor Elder Daught in agony from bad back

· Being told by staff that the wedding will be done like this...!!!

· Give Younger Daught away

· Son-in-Law a smashing bloke – love him to bits!

· Father of Bride speech which had been muttered on computer for a month...

· Celidh; and now I know the steps to ‘Strip the willow’ after all these years

· Big disco and learning the words with a new Irish chum to “Aaaaargh worghhhh eeeeergh boooomph...”

· Seeing several of her oldest chums all together – last time was when she was at school...

· Actually, enjoying a damn good dance with her University flatmate as well...

· Younger Daught’s Birthday the next day!

· They’re off to The Carribean

· Trying to get back to normality

· Morose at piece of music to go on PC – ‘Salva Me’, and ‘Philadelphia’ by Neil Young 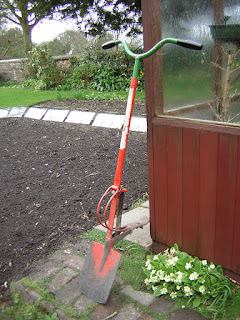 A while back, some of the discs in the Scrob-back began to get a bit nauseous, and began hurting more than somewhat. Mrs S had had a similar problem a few years previously, and I knew it wasn’t a happy experience.

We’d been trying to get ‘fit’ and were using a rowing machine, (which I now condemn as the worst fitness appliance ever designed), and quite honestly, the 'rowing' action eventually caused us immense problems.
So poor Mrs S grinned and bore it, but the year mine went, it was a question whether I could ever work any more, so the Doc hooked me in for a stretch – literally! That didn’t work, so after a couple of weeks, the offending bulge was chopped out, and instantaneous relief was the norm.
But we had an allotment - it needed digging - lots of it.
Mrs S bought me this marvellous spade. It is possibly the ugliest contraption you could dream up, but I can say now, that it is the best digging implement you’ll ever need. It uses about a third of the energy; you don’t have to bend down and it covers at least twice the area time wise without breaking into a sweat!
The technique is that you kick the pedal downwards into the soil, which pushes the blade in as any spade does, then you push forward an inch to ease the soil, then you haul back on the handlebars. The spring ‘loads’ and flicks the sod to any spot you choose. At first, it is really a hit and miss affair, and needs practice and patience, but after a couple of hours, you can really motor, and I’ve done huge areas with hardly any effort.
Terrex have gone out of production now. Their spades were often used by the old boys on the allotments we used, and I used to envy the speed and lack of effort needed to turn everything over. What has amazed me is that as they aren’t made now, you can’t get one anywhere, and even Ebay mentions £200 and lots of postage, as they are quite heavy…

So I’ll lock the old thing up again, having given it the standard Spring session before the witching hour of 12 noon of a Good Friday, when we adjourn for a pre-prandial tincture…
Posted by Sen. C.R.O'Blene at 9:43 pm 17 comments: 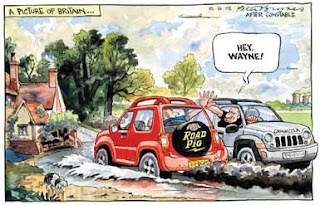 I couldn't resist sharing this with everyone - made me laugh anyway... 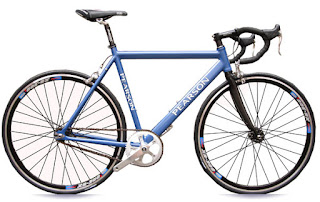 Years ago, in the old garden shed my Dad had built from a Nissen hut (post-war luxury…), amongst all the other old stuff like pre-war lawnmowers and old trunks covered with labels from faraway places like Lagos or Kaduna, he used to keep the two bicycles that he and Mum used before they were married.
Mum’s had no gears - my sister used it for years, and I believe it just fell apart in the end.
Dad’s was a ‘Sun’, which again had no gears, but it did have one bit of kit, which I’ve only recently discovered to be a very popular innovation, and has a huge following.
A fixed rear wheel.
In fact, there was also a free-wheel gear on one side of the wheel, and if you took the wheel out and turned it round, you had the fixed wheel cog in the same position.
Dad used to race bikes when they lived in Hertfordshire, and he often regaled me with tales of bikes being made with cane wheels, solid tyres etc, but this fixed wheel riding seemed to me to be an impossible task – I never got the hang of it!
Now I read that courier riders in London prefer these bikes, and there is a genuine preference for using them in traffic. This explains quite a lot, but not the absolute agony I remember while I went up and down while pedalling, totally out of control, and with great bruises and scars forming on both short-trousered legs…
Posted by Sen. C.R.O'Blene at 10:26 am 23 comments:

Trains and boats and sprains...

Elecs has a great post on falling out of trains, and I’m probably the last to read it – sorry about that… (http://electro-kevin-electrokevin.blogspot.com/2008/03/hitch-spotted-on-cctv-at-bedford-rail.html)

Just to keep the yarn going a bit longer; here’s an anecdote which has kept me in the odd sherbert for many an evening!

An old chum used the Victoria to Crawley train regularly, and often stayed late for a few beers to save his feet during rush hour. One evening, a few people, including my chum who vaguely recognised the others – as you do when you’re stuffed together for an hour each morning and evening, were sitting in one of the older carriages, where there were two slam doors – one on each side. As everyone seemed to be showing signs of excessive flavour, one man actually fell asleep, but nobody minded of course.

As the train approached Crawley, it slowed and eventually stopped short of the platform with a bit of a jolt. My chum and the wakeful guys watched helplessly as the over-flavoured chap suddenly woke up, yelped, leapt to his feet and dived straight out of the carriage door on the nearside, to land somewhat painfully on the track. After a few seconds bewildered staring at each other, the rest of the carriage all shot over to see how he was.

The unfortunate bloke eventually scrambled to his feet, and was hauled back up into the carriage by the assembled white knights. On arriving inside the carriage, covered in mud and dust, he blinked a couple of times, muttered ‘Bugger, wrong platform…’, and shot straight out the door on the other side to repeat the painful experience!He was of course dragged back yet again, and sat on while it was explained to him what exactly what had happened. This explaining of course took more than several minutes, as there were tears of mirth everywhere, but it still makes me hoot every time a yarn like Elecs’ starts me off…
Posted by Sen. C.R.O'Blene at 6:01 pm 13 comments: