Scrobs has spent the best part of several days recently, getting to change his anti-virus prog.

For some time now, AVG have come up with the goods, and for better or worse, a few money notes via electronic diversion seemed to be appropriate, when these items are considered!

But let's face it, when another bill of sixty splonders plonks onto the email stuff, one wonders whether this is the right way to stop getting Russian beauties grasping my tentacles! They can try all they like, but they'll never ever be as good as Her Fragrancy, so that's it!

And so, as we're with Talk Talk, a company with an odd name, but useful because they seem to do what we want, and in a pleasant way - so far, we decided to change... They do a version of anti-virus, and for a couple of quid a month, that beats the AVG stuff, so I decided to get in there are change over to them.

Our home PC has now undergone eighteen restarts, forty-five scans, three-hundred new curse-words, a glass of red, three punches, a shriek which set off the alarm in the house next door (while she was on the nest and 'at it' I believe), and I still can't get rid of the Russion lovely who is desperate to see me as soon as possible for the rubles I promised her in 1986!

I reckon all this virus stuff is a bugger, to bugger up any bugger who wants to bugger your system, and do bugger all to help in the end.

Ergo, buggeration is the answer!


While repeating Scrobs' all-time mantra of appreciation of the female form, this little clip has brought much happiness to these old eyes...

The Luscious Senora O'Blene, in her prime, was teaching tennis, hockey, netball and that evil 'game', lacrosse, to all sorts of school children, from the sophisticated ladies at private educational establishments to kids enjoying a knockabout in Hastings.

I showed her this, and we both agreed that just maybe, they could leave football to the lads, and get on with wounding their own opponents in games where males would certainly get hammered at every turn!
Posted by Sen. C.R.O'Blene at 6:18 am 8 comments: 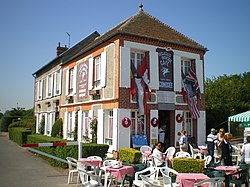 Some years ago, 25 in fact, we went on holiday to Northern France in a Gite near St Pois in Normandy. There was the four of us, Mrs O'Blene and two daughts and we were going for a long fortnight, (because we'd had a huge refund on the previous year, as the drains all blocked, the gas shower nearly killed a daughter, and the place was a shambles so we had a huge refund, but that's another story).

As the D Day events were in full swing, we were watching quite a lot of TV which showed the Pegasus Bridge celebrations, and the Landlady of the Cafe Gondree was on the box most evenings before we embarked via Newhaven for Dieppe.

When we visited, we noticed that the whole area is in fact quite low-key, even quietly reverent, and the sight of the old swing bridge parked in a field close by, almost as an after-thought, made us wonder at the way the 'invasion' was accepted, and that the good people of France had noticed that the Brits and the Yanks were indeed pretty adventurous people after all.

We felt uncomfortable at the museum in Caen, because that was a bit too navel-bliaring, (sic) but the simple narrative coming from the Pegasus Bridge, and the lovely lady, Arlette Gondree whom we immediately recognised, was that this was all a simple anecdote to a huge event, but a signal warning to oppressors, that nobody ignores the 'state' of the nation, however their duplicitous 'politicians' think otherwise.

It's a delightful place, and well worth a few minutes reflection on bravery, strength and fortitude; not the layabout-leftie-loser renta-mob trash so loved by the bbc, corbyn etc.

I saw two Spitfires overhead yesterday morning. It was a sight to be bottled and kept for ever, and the sound of the Merlin engines just crackled the heavens. A neighbour was inside her house, and she even heard it all and rushed out to cheer!

What a sight to behold!