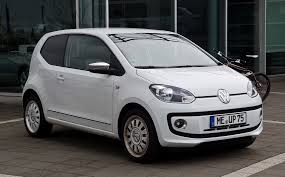 I haven't done any research of late but, it seems that now is the time to get hold of one of these cars!

Recently, I took our Peugeot for an MOT, which it passed with flying colours, but while I was there, paying the bill and letting go a little gasp (it was cheaper than I thought it might be, so we now have a new shower in the bathroom, but that's another story), I asked the chap who does our car work, if the VW 'Up' had an auto version! He wasn't sure, but as is his wont, he then manhandled me over to an auto Polo, with the words, 'Just shut the do...!

I couldn't hear a thing, and the strength of that bodywork is a telling design which means much more to me and Mrs Scroblene than ever these days! Gone are the rorty pocket-rockets, we really don't do long drives these days, and my clutch leg hurts like hell if I don't plan ahead, so I want a small auto and that's that!

My esteemed and famous neighbour, who is a good friend, told me that the main reason why he bought a VW, was that he'd once seen a 20 ton lorry lose control in high wind and topple over onto a VW Golf in the West Country, and the whole of the car remained the same shape, as did the occupants, so that's another reason for wanting one! Also, his Golf has about forty-eight gears in an automatic gearbox, and it goes extremely well on motorways, so that's a big plus too!

My garage has a reputation second to none, and when our boat comes in (and I'm not at the station of course), we'll toddle off down to see him, listen to the twaddle, and walk out a bit poorer, but ready for anything a lorry can throw at us!

Luckily, the bit of news on the back of page four of the 'Kent Bugle and Reporter' about 'emissions', doesn't make me worry one little bit, as it's only a made-up figure dreamed up by the silly Prescott-fumed Kyoto 'agreement', (agreement? bollocks), which was a farce in itself, and of course the wasters in Brussels, who have so little to do which is useful!

Any 'bad' news is good advertising, and I just can't wait for that ship to come sailing into the station... 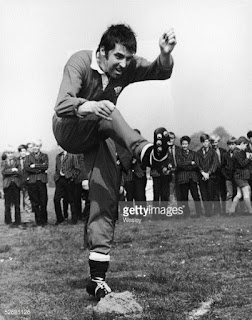 When Scrobs was an enthusiastic rugby player, one of his jobs was doing the kicking.

Back in the dirty old nineteen sixties and seventies, rugby balls were best described my that marvellous commentator and writer, Michael Green, where he mentioned a rugby ball used in Coarse Rugby would be nearly round, underinflated and soggy in the extreme!

Scrobs was expected to kick goals and conversions with this bit of kit, and sometimes they did in fact scrape over the crossbar... But back then, there was a king among kickers, and he was Bob Hiller, of Harlequins and England.

Hiller kicked properly, by using the toecap of  his boot, and sighting up directly in line with the centre of the posts, and belting the ball through on numerous occasions. He was also a good drop-goal kicker too, but that was another action.

So this method became de-rigeur for Scrobs, and some success was achieved, even with the dreadful ball Michael Green described. But then there was a sort of earth-movement, and kickers started to kick with their insteps, and even worse, round the corner!

Disgraceful behaviour! Some players even placed the ball on a mound of dirt, in a torpedo fashion, and kicked the end!

I've never understood how accuracy could be maintained by this method, and even watching the best kicker ever, Johnny Wilkinson, I could never see how he could line up with the sort of accuracy that one can maintain when one kicks in line with the posts!

Now the glorious World Cup is upon us, I hope to see at least one player kicking properly, using the best piece of footwear he can buy - with a proper, solid toe-cap!

No, not the guy in the French Connection, but  the chap who went down to the allotment to gather several handfuls of spinach for a lunch to die for...

Shredded spinach, toms and carrots from the garden, grilled bacon, lots of croutons, and a couple of flasks of the old home-made elderberry wine!

Scrobs crashed his Lambretta into the back of a parked van, in bad weather...

By now, the stitches would be beginning to tug, and they'd stopped poking my eyes out with a torch! A chum had visited me with a big bunch of grapes and twenty Senior Service... (I still had some duty- free Peter Stuyvesant then, but the Seniors were pretty damn welcome...) I would be in St Helen's Hospital, Hastings for another seven days.

Slowly walking past our local pub a few days later, I saw the owner of the van though the open door! Although it was never his fault, he had been distraught and very concerned about the accident, and he pulled me inside for a drink.

It was Whitbread Tankard, and I had three or five pints! The locals - and the landlord - always referred the fizzy bear as 'Diesel', and Scrobs spent the rest of the afternoon investigating the insides of his eyelids..

So I learned a lot about diesel that week...