Trumpet cocks snook at the press... 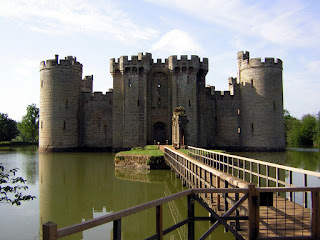 
Councillor Sid Trumpet, who now chairs all the meetings at Sodden Prickney Parish Council, on account of Basil Kalashnikov being temporarily deranged, has decided to ban from all the council meetings, the local Sod-Pri Bugle, a silly sort of freebie paper where people sell second-hand beds, and melamine tables.

This has enraged Ms Cynthia Molestrangler, who has a reputation for faking it on several occasions, (not what I've heard - Ed), and also, funnily enough, Miss Amelia Newt, who often confuses the council meetings with whist drives, and gets very upset if she can't cheat a little with Ron Groat, her life-long squeeze, who used to run the drug trafficking franchise for the local chemist, until he was sacked for chewing tobacco on duty.

Councillor Trumpet has also banned the local BBC reporter, Jim Soap-Oprah, who has developed a particularly nasal sneer whenever he talks to the cameras.

The car-park wall is well under way, and Sagtrousers have delivered several large reels of barbed wire to the site, where feverish activity to nail it to the telegraph poles is continuing in earnest!

All in all, it's been a pretty good start to the year, and Councillor Trumpet doesn't bother with the press any more, just emailing a few mates, and telling them what's going on and stuff, and they're all quite happy!

Ms Billary is hoping for an Oscar this evening, and so is Willy Clinchton. They're both favourites for a walk-on non-speaking part in a short TV advert for something or other, which has been completely forgotten already! (Oh yes, it's the Deniercrats bid for the Sodden Prickney Council Election - Ed)
Posted by Sen. C.R.O'Blene at 6:38 am 6 comments: 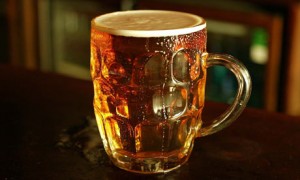 Last evening, I met up with a friendly bunch of good friends for a beer and a chat.

Earlier in the day, I'd been writing to a lady about reminiscences from the nineteen-sixties, and explained how my first proper salary was £4.0.0 per week.

My pint(s) cost exactly that...

But as Oscar Wilde once said, when being pronounced late/early for an event, 'What does that giant orb in the sky know of what happens down here on Earth'! (or something like that...)

O'Blene Enterprises Inc. Ltd. VAT and Bar, had opened an account with Sagtrouser and Wife, and started to manage a building job at The Turrets just on twenty years ago!

We had a superb local builder, who is still remembered as one of the best, and the pic below shows what happens when you eventually clear out the garage... 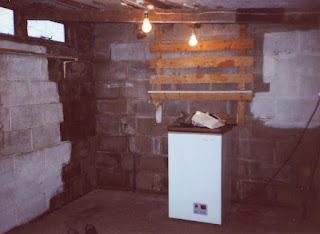 The freezer had packed up a day or so before, (as they do) and you can just see the danger light showing an ominous red blink!

It was possibly one of the three ugliest garages in the village, and luckily only one remains at the other end of the High Street, but this cold, leaking brute just had to go, and be replaced with a decent extension.

When I got home from work that evening, the first job our builder had done was take it all down, and here is the sad old disconnected, leaking, empty freezer, getting ready to leave this mortal coil, or whatever freezers did in those days. 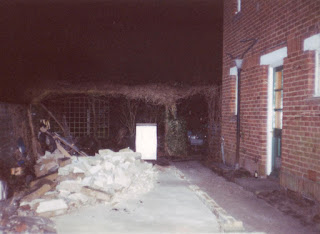 This was the first really serious work we could afford to do at The Turrets, and we plunged every penny we had into the place, but never regretted a thing, except losing the huge grapevine at the back, which we usually left to grow over the garage to hide as much of it as we could! The grapes made fabulous wine too!