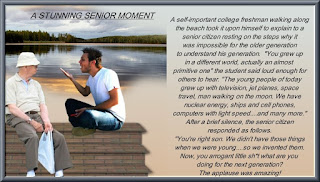 ...sound of wind whistling in the telegraph wires, a small piece of tumbleweed emerges and rolls along the track and another ego is put in its place...

Mind you, I can remember pissing off older people like this and so we're evens now...

.
As today's the day when we will be fed a bunch of lies by the bloody crowd we have to call 'government', I've been scouring the press for a nice high rock, over which I would like to push every single squealing, lying and cheating politician which has effectively brought this country to ruin. 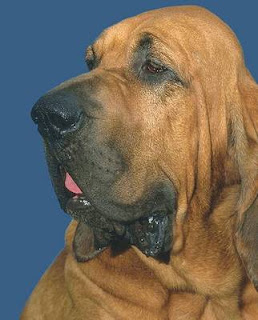 As the Hon Member for Italy Mid North East has said here, I'm also a bit sad to see him gone.

The dog food ads he did were actually very funny at the time, although his TV cook interludes went over my head, as all I ever cooked then was a tin of Scotch Broth with half a pound of mince from the butcher in Earls Court Road, and something vegetabley, like a cabbage stalk.

Even when he became an MP, he was immediately accepted as someone who was famous for having done something; having at least become a paid celebrity/wit/presenter before delving into the mirky filth of politics inhabited by many of the corrupt shower we have to pay these days. I always wondered why he did it as he was much better at selling things and making us amused.

Chefs like him were observed, only occasionally listened to, often copied, sometimes even cooked by, but they were there for the public who had grown up with fish and chips, boil-in-a-bag and no microwaves. And we liked him just as a bloke with a lugubrious face, and such a funny voice which my chum Mark would emulate at least eight times on our way to the Two Sawyers at Pett.

Celebrity...What!!! Noooh, Clement Freud was in there for all of us, and never the attention seeking sort of bloke we have to endure at peak times these days.

But when they showed the advert with the dog just now, I nearly grabbed a pencil to write down the recipe for beef, marinated overnight in garlic and red wine...
Posted by Sen. C.R.O'Blene at 9:00 pm 16 comments:

.
I only recently re-discovered this, while tinkering about looking for new stuff to record.

I bought the original 33rpm record soon after I saw a program by David Bedford on TV, and found that it was a quadraphonic version, which left me somewhat bemused as there were only six 'speakers' in the Turrets about then, and four of them were me and the family.

This guitar solo, which was recorded in Worcester Cathedral, just rings so many more bells, especially at a point about 55 seconds in, when the kit he was using produced a note 25 seconds long, and still creates rear-neck-hair-stand-upment... There's one hell of an ending too, if you're minded to hear the whole piece.

It is probably the most self indulgent bit of playing I've heard in a long time, and combines my two favourite instruments to perfection!
Posted by Sen. C.R.O'Blene at 5:04 pm 4 comments:

Logic it certainly is; 'bastard' it usually is... 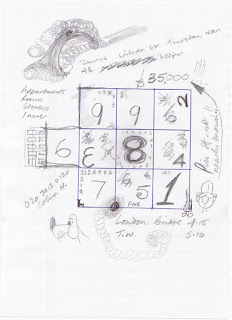 I'm a great fan of Sudoku, and can usually be found curled up with a good puzzle at odd times, like waiting for 'Auf Wiedersehen Pet' to start. Mrs S is an expert and can spot a 'hidden triple' at eight paces, while I occasionally struggle on the 'naked doubles', so you can see where I'm coming from...

Trains are the best places in which to do these, as the free papers usually have three levels of puzzle, and nowadays, I've graduated to begin on the right hand one, and sweat it out for an hour. The idea is to try and do them without filling in any possible numbers, i.e. to work out and remember each possible number, and eventually complete the nine squares. I do like 'The Times Difficult' book too, but this is getting a bit battered now.

Trouble is, with the combination of the stress of work and incessant phone calls, the stench of pork from our dreadful banks and politicians and the occasional prolonged tincture with business chums, the regime seems to falter somewhat, and the occasional 'so bloody what' attitude surfaces, as the pictured copy of 'Sudoku for Late Middle Aged Idiots' shows...
Posted by Sen. C.R.O'Blene at 6:35 am 10 comments: 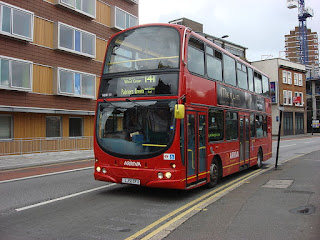 Last week, I did something I've always wanted to do.

I commanded a bus.

Yup - in charge; leading from the front; conducting the war effort!

Well, it wasn't quite like that, but this is what actually happened. Every month, I go to a business lunch club near Liverpool Street, and some serious networking in property and building goes on for several hours. The best time to arrive is around 12.00 noon, so there can be some serious discussion before the inevitable Davy's No 1 takes over...

And so it was, we had two formal meetings which were potentially useful, and thereafter, it was a free for all. A chum was retiring that day, and he generously funded the comestibles, and the Davy's No 1 flowed...

As is usually the case, I lose track of the time, and as I travel by public transport on days like this, I have to catch a certain train, or all hell lets loose when I arrive at The Turrets two hours late. So, leaving with just a fighting chance of making London Bridge by 4.15, I ran (yes ran), across to Moorgate, and jumped on a 141 bus, which is the quickest way to the station, as Merms knows well of course.

When we got to Bank, there was a sea of Plod, and yellow jackets were in abundance. I think there were a few protestors somewhere, but as they're all shorter than City coppers, we couldn't see them. But, the roads were empty, except for our bus, and the driver, who was the spitting image of Mr Ho in 'Mash' (the guy who gets Henry's desk in exchange for the drugs he's pinched from Hawkeye) started grinning, and fiddling with a radio. By this time I was up in front at the window, and he slammed on the brakes and told me that they'd been advised not to proceed, as it was too dangerous. But he had a big grin on his face!

So I kept telling him 'Oh sod that, we're OK, let's keep going, you'll be alright, trust me...'! (Davy's No 1 has this effect) and I'm afraid from there on, he believed me, and we sailed through the empty streets, with me cheering and waving my arms, and getting everyone in the bus to keep encouraging him. It was a great journey, we all clapped him, and his grin got even wider as we got over the bridge unscathed.

I caught my train with a minute to spare, so thanks to Mr Ho, it was a grand day!

Of course, I'll never ever be able to show my face on a 141 again, they're sure to start sniggering...

(Foot note, the title of this was first used in Private Eye back in the sixties, and was a sub heading in an early condemnation of the Viet Nam war. Some things don't really change...)
Posted by Sen. C.R.O'Blene at 5:51 am 8 comments:

Scoop of the Decade...

While Guido is feasting at Le Coq D'Argent today, the story behind MP's expenses just won't go away. With an old contact of mine who has access to some 'records' from his days in Whitehall, we've been up most of the night trying to crack the source of the leaks, and we think we're getting there.

It's not what you know, it's who you know, so in the belief that every journalist gets one blockbuster story in a lifetime, we now know the name of the person who may be involved. He's closely associated with one of the most famous Banks in the the world, in fact he almost lives there!

Don't forget, Scrobs got the name before anyone else!