Bring back the real 'Summer Game'...

As the cricket season squeaks and bangs to a halt, and 'stumps' is called all over the UK, I have to reflect on how little I watched this past season.

Back when I was a boy, my dad would always have the TV on for the cricket while he worked in the garden. He'd pop back in to watch an over or two, open a can of light ale, then carry on with whatever he was doing, content in the knowledge of Cowdrey's century becoming a possibility, or Boycott starting to get runs after three hours.

Now the awful BBC hardly ever shows any cricket, I miss all that, but there are rumours that the terrestrial TV services may take some of the viewing back, which could be interesting. I hope so.

Skipping through some earlier cricket Youtube clips recently (it was rumoured that Don Bradman's family came from around here, and I wanted to find out more), I found some great footage of the 1981 Ashes, when Ian Botham scored a memorable 149 not out, but the other star was Bob Willis taking 8 for 43 in an incredible spell of great bowling!

And watching these clips again, made me feel rejuvenated and even elated, to see such a great game, well played, and without the snarling, spitting, sledging which infests such great events these days.

Perhaps the 'Summer Game' has gone too far towards money, advertising and 'sleb' status now, I hope not, but when I can next switch on the TV, open a can of gardening beer, and enjoy a few overs before I cut the grass, I'll be a happier Scrobs than I am now! 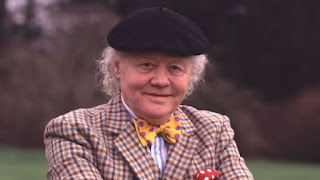 So sad to see that Dudley Sutton died yesterday. Of course, he was getting on a bit, and amazingly still working up to the end, but he was a treasure in our eyes, and we remember so much about him!

His character in Lovejoy was just marvellous, especially when he was with Chris Jury, but of course, when Ian McShane was in the scene, almost anything could happen, and invariably did!

Mrs O'Blene and I still say to this day, an immortal line from an advert for some long-forgotten product, where he meets his mates in a pub, with a wry smile, exclaiming 'She wants her bath oil', in that inimitable rounded voice which was unique to him!

We bought the whole set of all the Lovejoys a couple of years ago, and it is going to be such a pleasure seeing his antics again, when we start watching the screen in October.

The gorgeous tipple is almost unavailable around here now. Even Tesco doesn't stock it any more!

What is so strange is that here we are, in The Garden of England, with apple trees everywhere (yes, still), and there are hardly any craft distillers making it.

I've found one, Greensand, but their apple brandy is still in cask, so we'll need to wait awhile, but come on, we're only a few miles from Normandy as well, and they make the stuff everywhere!

Anyway, the pic shows one of our favourites, and when the apple season really starts to motor, I'll be on the lookout up to fifty miles in any direction...
Posted by Sen. C.R.O'Blene at 7:41 am 4 comments: