Bliar and Drown are not wanted at the wedding next Friday. 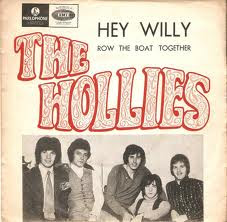 There's a folk song somewhere out there with some of the lyrics which go a bit like this...

Hey Willy, Willy
(something or other),

There are (something or other - relating to young men joining up, possibly American Civil War...)

For those of you with the musical touch, the guitar chords are a basic C then Amin; C, then Amin, rather like the beginning of 'His latest flame' by Elvis Presley! The years change with the final line in each verse, so the next verse may be 1866 instead of the previous verse which might be 1863!

I used to do this occasionally back in the sixties, and changed the name to 'Jenny', because she was a lovely friend, and married Eddie!

As usual, the winner gets a big hug, and the second place will get two hugs, as I've been out in the garden all morning and it's a bit hot out there...

(And it definitely isn't a song by 'The Hollies', but it was the only pic I could find with even half the title of a song I can hardly remember, and which may well be the meanderings of a junior Scrobs' mind, while under the influence of seven pints of 'Old Dreadfull' and 20 Three Castles Tipped...)
Posted by Sen. C.R.O'Blene at 6:32 am 1 comment: 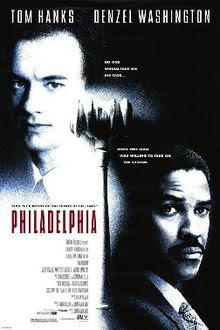 A few years ago, (just about now) when both Daughts were living at 'The Turrets', there were the usual discussions about films, programmes, life in general etc., and because our lovely girls were both well towards adulthood, I found the discussions enlightening and informative.

To be honest, I learned an awful lot from our two lovely Daughts.

When 'Philadelphia' (the film) came out in the early nineties, my dear old Mum was becoming embraced in the realms of Alzheimers, and was safely and softly planted in a pleasant home in Hastings. It was a difficult time for everyone, including my Dad, who wasn't well either. We were all in limbo for several months.

I can easily remember listening to this on one particular drive over to Canterbury, where I worked, while I was coming off the M2 onto the A2 down towards the city. This song on the radio was Bruce Springstein's seminal theme song from the film, and I remember feeling utterly miserable on hearing those first enigmatic major/minor chords, with the simple drum beat in the background.

And so, later on, I watched the film at home with both Daughts, and they explained exactly what was going on. And I mean exactly, i.e. why the story in the film was so important.

And I learned some more from our Daughts, some more news of the present world, which I'd probably been ignoring so I could focus on what we all wanted as a family; like holidays, gardens, money...

So then, I bought the music from the film (still broke, last recession biting hard; got it from Cranbrook Library when they sold off all their old tapes; cost me a quid...) and it is now safely in my shed with Younger Daught's old tape player, so I can listen to great music like this to my heart's content, while making the rocking horse for GD.

If ever there was an incredibly powerful soundtrack to any film, then this one must be up there with the best of them. It is totally absorbing, and means an awful lot to an ageing Scrobs. There are several other songs on the soundtrack, and if anyone wants to ask me, then I'll provide the links, because one particular intro just melts...
Posted by Sen. C.R.O'Blene at 8:19 pm 13 comments: 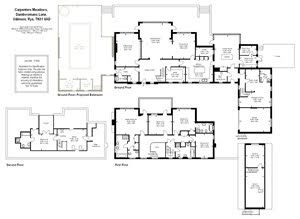 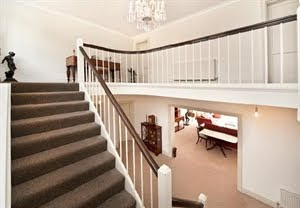 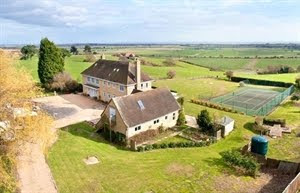 This big house has just come onto the market at a cool £1,675,000, and I hope it sells well for several reasons.

It was the first private house Scrobs ever worked on as a very junior quantity surveyor, way back in 1968.

Back then, it was one of the biggest new projects being built around Rye, and it still seems strange to remember that the final account came in at a shade under £35,000 to build!

The house was built for one particular family, who were pretty well off, and I haven't seen that staircase since I stood there when the job was virtually finished, and was peered at down an imperious nose by the lady of the house one day. I'd called in because I wanted to re-check a measurement of the copper tube, which made up the central heating system in the place. The builders, Turner Bros., of nearby Winchelsea, had put in bills for two near identical amounts of this 1/2" pipe, and I just couldn't reconcile the money, which was about £35.00!

So it was my job to remeasure every single run of pipe and check the lengths against what they'd ordered. It was the first barney I ever had with a builder, and although I was proved right, it was an unnerving experience! But of course, to Mrs Imperious, this would have gone right over her head...

What will probably come out in the open though, is the fact that it was eventually bought by Spike Milligan, and he died while living there. He's buried in Winchelsea boneyard, somewhere in the distance of the pic!

Spike famously said once, that he thought that the house had been designed by a blind architect! I got to know the chap pretty well back then (always Mr McLachlan), and in fact he was one of the most skilled and laid-back designers I've ever met in past or present! He never assumed that we thought he could walk on water, as so many under-talented designers do these days, and I remember him designing a chimney detail in his beloved 'Bradstone' with just the basic drawing board and 'T' square, and doing it in ink, with no pencil, and immediately describing for the builder what he wanted! And it worked of course!

So much for 'blind architect', the working address we used for the house was 'Dumb Woman's Lane'!
Posted by Sen. C.R.O'Blene at 5:26 am 17 comments: 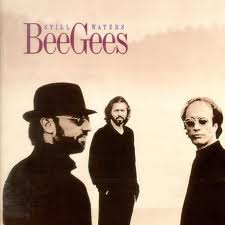 For no reason, I started humming this song a couple of days ago. I actually quite like a forceful beat, not rock-ape thicko stuff, but something with the occasional brain cell included in the price, and that's why I liked Joanni by Kate Bush! (Well, Kate Bush looks like Pips, so I'd have to wouldn't I...)!

Any'ow, I can easily remember the Bee Gees on their first outing on the Beeb's Top of the pops, and they played (or mimed, as their guitars weren't plugged in) this song.

When Mrs S was seriously poorly, and in hospital with all sorts of bits going wrong, the Babes were under Scrobs' control, and doing their level best. On one visit, I managed to get a request on the hospital radio, and we got Massachusetts played. The Babes became even more precious then...

Some say that Scrobs is losing his marbles, but not to his face thank goodness...
Posted by Sen. C.R.O'Blene at 9:12 pm 8 comments: 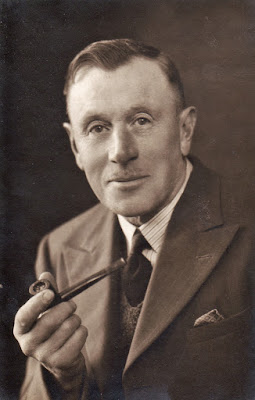 I've recently filled in our census form, because, despite being shredded by banks, politicians etc., like most small businessmen, I quite like keeping records, and if any despot really wants to know where I live and what I was doing last night, I can imagine that the last thing he's going to do is click through the 500 million odd forms to find my address...

In the 1901 census, I discovered that my paternal grandfather, the builder who built quite a lot of Letchworth, and Welwyn Garden City, was listed as a 'Tinman'.

Now, apart from whistling 'Yellow Brick Road' a few times, and also this lovely little song by some old heroes, I was surprised by this, because:-

2) I couldn't find out exactly what a 'Tinman' was, apart from the obvious connection with - er - tin! I thought of 'scrap' (nooo), 'tinned' joints in plumbing (maybe), but finally gave up!

Only recently, I uncovered some rare notes written by my Uncle Jack ('twill be another post, but not here), which had several paragraphs on what was going on in the Scrobs ancestry in the early 1900s. He mentioned a workshop in Grandpa Scrobs' early life, where he'd based his plumbing business, and where, in his spare time, he made kitchen implements like bespoke pots, saucepans and the like, (perhaps an early version of these) and they were sold in a shop in Leys Avenue, Letchworth! I imagine they did the job properly, (otherwise they wouldn't have sold) and hope that they stayed the course! Apparently, he loved the work too!

So there you have it; just a small census yarn about a 'Tinman', and which also causes me a bit of a grin, because, as all three readers know, Scrobs spends ages in the shed, doing this and that, and his entry in the census says - er - oh hellfire, I didn't say...
Posted by Sen. C.R.O'Blene at 5:10 am 31 comments: