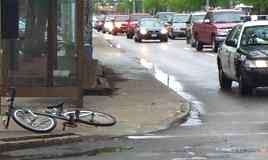 Iain Dale posted a nice story yesterday, about a chap in New York finding a girl he’d seen on the subway, by setting up a website. Link here :

Some years ago, I was working away from home in The Midlands during the week, and driving home through London (pre M25), every Friday evening.

Somewhere round The Aldwych, (I’d taken a different route through, and got slightly lost…), I was driving in the wrong lane to turn South, and found myself out in the middle of the junction with about nine thousand cars bearing down on me.

So I put my foot down, and tried to escape…

Even back then, cyclists were trying their luck everywhere, and a chap poked his front wheel out just a few seconds before everyone else drove forward, and I hit him, knocking him off his bike and damaging his wheel.

I stopped and went back to help, and immediately recognised him as a guy I knew well as I’d been working with him on a project just a few weeks before! So I had to say sorry; he accepted that; and I piled his bike in the boot and took him home to Kentish Town, where I bought him a new wheel.

What are the odds on that happening for God’s sake! In London; in rush hour too! Anyway, he was happy, I was relieved, and now, if anyone ever says to me that winning the lottery on the day the big Premium Bond pays out is never going to happen; I don’t believe them!
Posted by Sen. C.R.O'Blene at 5:33 am

Nowadays he'd have been on to 'Injurylawyers4U.com' and been diagnosed with a multiple of injuries from bruisng to PTSD and your car insurance would have gone through the roof. Enjoyed your last post too, I have an MP3 player thingy fitted so when R4 does get too awful (which it can these days) I switch over and am transported back 20 years +, and enjoy my drive musing and wondering about that different place - the past. I'm surprised i haven't mown down the odd cyclist myself!

Thanks for dropping by! You're absolutely right, the consequences would be awful these days! Just imagine also, bashing into a foam-flecked rock-ape riding on the pavement; the ugly moronic shrieks of 'compensation', 'I know where you live', etc etc would echo down the years...

The guy I ran into was a Pole I think...says something doesn't it!

20 years eh? I know what you mean; and did a post on the same thing back in September!

There is no such thing as an "accident" these days. We are moving towards the American view of the world which is that there is always someone at fault.

that is a pity ed...in the states if there is an accident no one stops anymore because you can be sued for helping out...doctors won't help unless in a hospital where protected...it really is sad when just the simple act of helping has to be weighed against the amount of possible law suits...

Only you could see this positively, Scrobs.

Having fallen in many buckets of tits I've always come out sucking my thumb. So I don't buy lottery tickets.

It could be you.

I could only think of bizarre coincidences...like daughter's father's brother had and affair with Boyfriend's best friend's wife.

E_K - like the Nat Lot, one needs to be in the bucket of mammaries to win it.