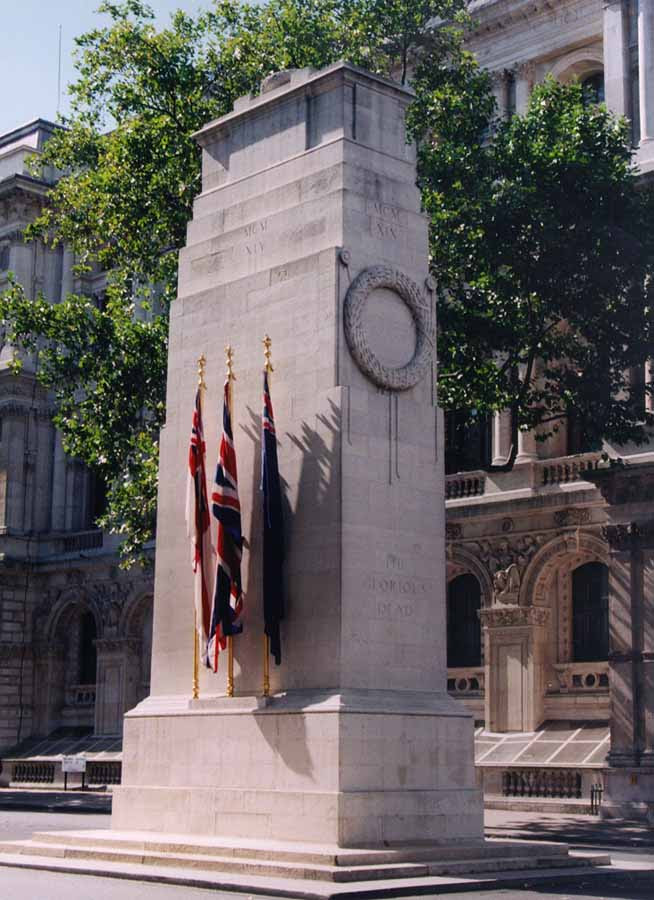 Yesterday was a particularly fine day for getting around London on foot. I had a meeting in Cavendish Square, and another in Victoria, but some time in between when I had several phone calls to make and nowhere to prop up the briefcase. So I walked, and headed for park benches wherever I could, and felt pretty good.

It was heart-raising to see the milling crowds after the Duke of Edinburgh Gold Awards ceremony at Clarence House. Good Kids those, and the glowing faces and flashing cameras all around exuded well deserved acclaim.

Later on, the walk back to Trafalgar Square took me up Whitehall, away from the House of Expenses. Just before The Cenotaph, everyone was directed by the Long Arm of the Law to the east side, and I saw quite a few workmen preparing The Cenotaph for Remembrance Day. It seemed a bit over the top (wrong expression, but meaningful), that we all had to trudge around, but the real reason was that Downing Street was under siege...from visitors!

There must have been at least fifty policeman watching the crowd, presumably more milling around unannounced, a huge gaggle of senior figures just outside the gates, even more inside, plenty of blue lights, lots of very, very busy politicians urgently looking at their watches and about 200 spectators. I sat on the low wall opposite, made a few more calls, and waited.

Around 3.00pm, the gates were swung wide and a flotilla of big black staff cars carrying King Abdullah and the rest, came out and swooped north towards the Rich Precinct. There was not a sound from anyone, and within minutes, the area was back to normal. What an expensive fuss about coming to meet Ed Balls! I reckon that half hour cost around £60,000 in time spent, organisation, expenses for politicians, and more police than you can shake a stick at – well, not shake a stick at under the circumstances...

Meanwhile, the workmen putting up the barriers at The Cenotaph toiled on quietly and efficiently, preparing a place where real Heroes are remembered.
Posted by Sen. C.R.O'Blene at 6:27 am

I visited London earlier this year - I found the security overwhelming...

A wonderfully poignant ending to that blog post Scrobs, thank you for the insightfulness that you bring to each of your posts.

i have always found it odd who the majority of people in the world consider heroes...the every day person who would give their life for another...even a portion of their life is only considered ignorant for doing so...yet those who will walk on the backs of others for a higher position in society are viewed as brilliant...seems to be a little backasswards...imho

I was appopleptic when cops allowed Anti Capitalist protesters to urinate against the Cenotaph in the 90s. I cornered a cop I knew who was involved and asked what was being done about it, "Don't worry - it's all under control. We have their images on video and we're going to collar them." To my knowledge they never did 'collar' them.

I think the police should have gone in and sticked every single one of the bastards there and then. (I would have gone loony and done it - I used to be a riot officer BTW)

If the cops had done that they would have had the wholehearted support of the Nation. But they were spineless and that marked for me the day I lost repect for them.

E-K it would have been worth loosing my job over giving those Anti Capitalist protesters who desecrated the Cenotaph and Churchill’s statue a good beating.

I can truly say this; I would have been shoulder to shoulder with you to stick everyone I could!

The security detail at the fireworks display I went to last night was incredible. What I want to know is where do they find police officers when they have to turn out for these "events" when normally one can go for weeks without seeing one on the street?

Oh yes, and I agree that our leaders seem to have a pretty high opinion of themselves. I bet they would be shocked to find out what the "little people" think of them.

I thought Brown was going to be an anti-gliterati austere PM.

Why do I feel intimidated whenever I even see a policeman these days?

Yes, they're bigger than me, and supposed to protect Mrs Scroblene and me from marauding hordes, but somehow, their 'in yer face' attitude just reeks of big government control. We are all 'little people' to this dreadful shower of an administration, and they want their enforcers to be the same.

Why should I ever feel I have to defer to someone who is my equal, probably has folks just like me, but somehow operates to an agenda which doesn't include me? Or does paranoia kick in at this point?

On the TV the other evening, we saw a couple of glazed eyed coppers ploddingly explaining to kids, who were blatantly breaking the law by driving and speeding around in Medway late at night, that they shouldn't be so naughty and should be good boys.

It was cringingly embarrassing to see this, and we can't understand why they didn't arrest the little buggers, give them a thick ear and let us all have a good night's sleep for a change.

Luckily, I don't live there, but I pity the poor sods who do!

Scrobs, given that the shooting of Juan Charles was an institutional failure and no one policeman was responsible, will the entire Met forfeit some wage/salary to pay their fine? Blair could pay, say a tenner, and everyone else could pay pro rata according to rank. I am already working hard enough to pay for Northern Rock, let alone having to work to pay fines for the Metropolitan police.

Scobs - Intimidated by the police?

Most of those I see these days are either
a) male and gay. (Spiked up hair, and thumb rings), or

b) female, and either dwarfish or dyke-ish.

What happened to 6 feet 2 inches of no-nonsense, stick 'em till they bleed coppers?

Ahh, those were the days.

Have a look at Street Wars on the box. Some good, non-gay, non-pc coppering on there. PS Swann gets my vote. He'd have shot the Brazilian and his mother, and anyone else who didn't stop when told to do so. Quite right, an' all.

The constitution has been turned upside down. The State no longer represents the people, the people are subject to the State. It's been done slowly enough that most of us haven't noticed each individual change.

'I am already working hard enough to pay for Northern Rock',

Oh yes, we all are, and where are all the votes...well sod me, there are several... no loads in Northern Rock. So your £700 odd quid is paying for these votes.

Ed; nicely put and so understandable! Is that why we never see a policeman unless he is responding to something?

Killemall; We used to s*** ourselves when our village copper was around, but he was easily the best man to keep everyone in line! He was incredibly kind to me when I crashed my Lambretta in 1965...That's how policemen get respect.

(He had a bike with two crossbars, which my dad said made him look bigger... and he did)!

The reason we never see officers preventing crime is because there's no "money" in it - the police have to meet targets for solving crime not preventing it.

Did you see some of the comments there?

I didn't look at the comments on there. I have previously delved into them on that blog and come away dissatisfied!

The Belgiums are enjoying life without a government:
http://www.telegraph.co.uk/news/main.jhtml?xml=/news/2007/11/06/wbelg106.xml

Ed, the number of arguments I have had with apparently intelligent people over id cards. They just don't seem to get that it not about the card per se, but the change in our relationship with the state.

I find it very difficult arguing with supposedly intelligent people because most of these people seem to have given up the ability to engage their brain somewhere along the line.

You should have seen the presence at Lewes Fireworks night , thousands of them and well worth it. I thought the new memorial was very good Scrob , as well.

Don`t know about the D of E..something about the phrase " Cream of the youth of Britain'" makes me want to avoid it .

The constitution has been turned upside down.

Yes imagine that Parliament was once there to hold the state in check !!Oh dear ..tears of mirth..

Glad you enjoyed the Lewes celebrations Newms, they really do it properly there. Hope the new Newms Turrets domicile is shaping up too!

Ed; politicians can say anything and do nothing these days - they're a protected sub-species. You only have to look at the disgraceful Prescott saga.

Fuscia; as long as I'm away from any Euro-politico, I'm always happy in Belgium.