Farewell Angelina, the night is on fire... (Bob Dylan) 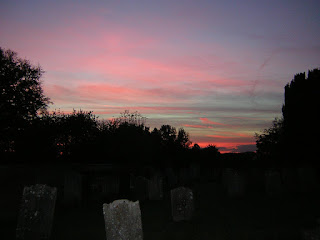 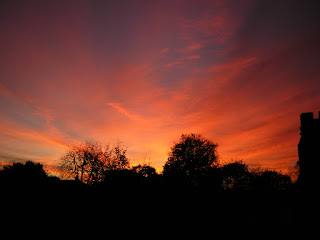 Occasionally, we get a late glimmer in Kent which looks quite nice, so I grab the 'Boer War Correspondent Waterproof Bellows Picture Reproducer’, (with adjustable plunger leggings, sanitised tripod and trouser guard), and scramble all over the graveyard near S.R.Benecol Turrets to get a shot in before it goes completely dark, and I continue to fall over the various stones and brambles which habitually grow there.

The first was taken a couple of weeks ago, but the second one was the best sunset I’ve ever seen and happened a year or so ago.

The main problem with being an aging War Correspondent with my kit, is that by the time I’ve got the glass plates back from Kodak, (by The Post Office), the damn skirmish has been over about three months, and everyone’s packing up to go home and write their memoirs!
I bet Don McCullin never had this problem, but he really is a hero.
Posted by Sen. C.R.O'Blene at 5:28 am

great
so the scrobs household is also on fire

It was a seriously fantastic sky that evening, but the smoke alarm stayed quiet!

We've had some good sunsets in London Town recently! My view isn't quite as nice as yours or Tuscan's...

Is that the one now manufactured under license by Nikon? If so, a popular beast in its heyday.

As I recall it weighed over 200lbs, and that was before you filled the main body with petroleum jelly per the instructions.

Thats really very sweet Scrob , if a bit girly . I am moving from london down to Lewes this week with family and i hope to see seomthing other than kebab vans in orange street light ...maybbe the odd star

See I can be goirly too

At the coast we have some great sunsets - but right now I do not have even have a camera phone...being broke is no fun.

Love the EK blog roll Scrobs ...I miss him , he used to comment on my stuff a lot ages ago ... great character.

I do ujderstabnd his problem all too well

I hope all is well with you?

From the blog post title I thought for a minute that that Angelina Jolie bint had got what was coming to her in the California fires!

Great photos, I will do my best to get some photo's of the mountains in North Carolina.

If you are going to Lewes, newms, be prepared for a lot of naked flame in the street. A LOT. Lewes' bonfire night is legendary and deeply weird. My brother used to attend in his pagan days.

Perhaps you can dust off the instamatic and post on it next weekend.

Newms, I think you'll like Lewes, but keep away from the big grey building to the west...!

Used to have a good rugby club there, and yours truly had his one and only injury there, which was assuaged by far too many pints afterwards...

Mutley; it's in the mind, just remember the sights...burn them into your soul...

Cheaper than a phone too!

Hercs, thanks for that!

While you're coasting the freeway, thinking of not much; you can play the song on the 8 track, and think of Joan Baez at the same time...

Pics of NC are always welcome!

Tony; you're right about the petroleum jelly, hence the flames...

Apparently you can get a camera which has a zillion pixels now, which beats the Bene-Scrol version by one zillion minus one pixels...

Younger daught was at Uni and spent a whole day there, losing a precious scarf in the process...

They take their bonfire very seriously and burn a effigy of the Pope!

Good I am a big rugby fan , as is common amongst those who were mediocre players. Little N is already being shown his father devastating side step

On the first's pitch, there was a hole about 6inches deep (well 2 or 3), which presumably was made during some energetic play.

I was running (ha ha) back and my leg went down into said hole, and it mucked up the Scroblematic tangentinocious tendon bladgers, causing me to yell 'F***' and whimper.

Everyone laughed, as I'd landed rather like a Tom and Jerry cartoon; ya know, ploughing the soil with my chin...

I think it was that night that we all fell about laughing uncontrollably on the way home (during a mercy stop) when the captain fell into a bramble hedge 'tackle out'... (reported once before on someone's blog...)

If you look up at the Honours Board, you'll see the name of my first boss Michael Siggs...bless!