Total miscarriage of democracy, sanity and due diligence... 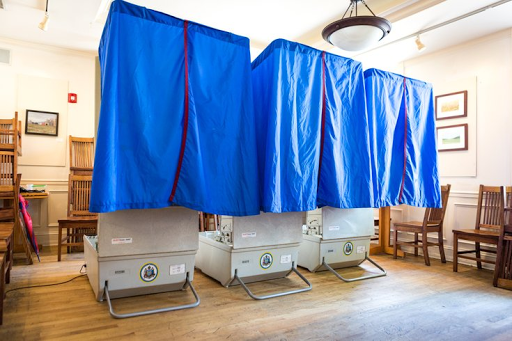 With the recent election  results still in dispute, Basil Kalashnikov had decided that the votes discovered in Edwina Bagage's saddle bag must be included, whatever state they are in!

A meeting via a Zoom sort of collection of people who actually knew how to connect Windows 3.1 to the interwebster thingy, was proposed, but the entire cabinet of the Sodden Prickney Parish Council decided to say 'Bugger it, we'll all meet in the village hall like we used to, and just shout at each other from all four corners'!

A vote was taken, and Norman Wibble took notes, well, wrote some sort of gibberish down and kept it to himself, as he didn't have Cynthia Molestrangler breathing down his neck like he used to have, so was a free man! Cynthia has blossomed considerably, since the Kent Themerama episode, where she managed several discreet meetings in one week, to ensure that something happened, (it did, twice)! So our feisty lady (you only become feisty after eight G&Ts and a quick fumble behind the Vauxhall Vectra), decided that Amelia Newt and Ron Groat had seriously tried to undermine the election, by employing a small computing firm known locally as Mousefart Ltd. The directors of Mousefart had insisted that they had done nothing wrong, except pressed 'Esc', when they should have pressed Ctrl-Alt'! This resulted in Cynthia getting 453 votes and Basil Kalashnikov only 7!

So, after all the yelling and shouting, it was decided to do a recount. Edwina was summoned to the committee, and a thorough search of her saddle bag was conducted under the scrutiny of PC Lumbersnatch, who recognised several of the other items as belonging to him, and also at least eight other gentlemen from the village. Edwina immediately went into a sulk, and also the ladies WC where a quick snifter of the local gin was consumed under stressful circumstances. When she emerged, she was faced with the reddening features of Councillor Sidney Trumpet, who bore down on her from a great height (he often did that), and she became more than flustered - more like hysterical! The commotion was heard in all corners of the shouting room, and everyone converged on the small passage to the ladies WC, where Edwina and Sidney had decided to make amends, and anything else they could in the short time available...

Basil Kalashnikov began one of his panic episodes, and ran off shrieking obscenities to the empty room, and Norman Wibble had a sudden bowel movement, much to the distaste of the rest of the committee in such unsocially-distanced surroundings! A spare pair of pants was discovered in the dressing-up box, Norman was dispatched to the men's WC to change and the entire committee returned to their shouting corners to resume the yelling.

By eleven o' clock, there was still no firm result. Edwina had gone home, leaving her bicycle on its chain and padlock, and accepting a lift in Ron Groat's Wolsley 1500, and getting a quick feel at the traffic lights for the privilege. Basil Kalshnikov had returned with mud all over his trousers where he had slipped in the mud near the car park after a large rant at nobody, but had gone to sleep in the corner. Cynthia Molestrangler and PC Lumbersnatch had decided to get back to her place and watch 'Question Time' for some obscure reason, but they didn't get any answers, so finished the Jack Daniels and collapsed on the hearthrug for a heavy-breather!

The only remaining counter of the votes in the village hall was Amelia Newt, so she proclaimed that she was the winner, and took the oath of office in front of the large mirror, just below the painting of the royal visit of 1953!

Democracy had been preserved!

This is all news to me. When I tried to send in a dozen postal votes I was told I had to deliver them by hand to the “temporary” distribution centre behind the bike sheds.

I tried that but there was a suspicious looking cove in asbestos trousers trying to get his antique paraffin camping stove to work so he could boil a kettle of water. He told me it was absolutely nothing to do with steaming envelopes open but somehow I didn’t believe him and decided to clear off. That’s my dozen votes wasted but no real harm done because I didn’t like any of the candidates and didn’t fill them in as a protest vote.

I come back here and find a posting of such genius ! Redolent of a lost past... I feel we are in soft glow of Spring and not the beginning of a bleak Winter.

Boris' "Circuit Breaker" was a swindle too far. There appears to be fire in the old Scrob's belly.

Remember when this all started and we wrote to each other like we were all going die ???

I miss the pubs.

I'm glad that you managed to escape the bad breath and foul smell of the resident keeper of the trash by the village hall, Mr H!

Arthur Narg has been hanging around there for several years, and we all think he's mad, but PC Lumbersnatch knows where he lives, so that's alright then!

If you'd like to send the twelve votes to Ms Molestrangler with a postal order for 12/6, she will ensure that a) you get a good run for your money, and b) you'll get a money-off voucher for your next visit, preferably in plain clothes, but anything would be considered!

Elecs, your sainted visit to this establishment is so well received, I feel like a further cup of tea and a Bath bun to celebrate!

There is so little fun in stories like this these days, it's all Boris this and Surkeer that, which makes for utter boredom...

I hope you and family are keeping your heads above water, especially your boys, who seem like relations to us here somewhere in Kent, wandering around like lost souls, but always ready for tinctures!

We're all doing well, thanks.

The boys are coming back for Christmas. One's had the lurgy already and there is a breakout at work but not my depot. It may be an isolation visit with much Scrabble and mini snooker - that's being optimistic that my vit D pills have been working.