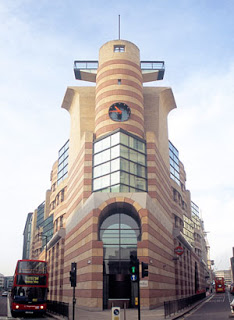 I've slurped loads of tinctures in this place and even marvelled at the greenery there, and the ambiance, and the glass etc etc. I've tripped over the odd door frame, and listened to lots of the sort of tosh which architects get rich and sexy on, spoken to gorgeous women about nothing in particular, but enjoyed the process immensely and also fiddled about with a funny tapas creation, but I don't understand why people jump from the edge and upset the people several storeys below, who are wandering about on the street seeing to their own business, or want to get home to their loved ones.

There is a well-marked lift to reach the cafe after all, and yes, it is a pretty good place to celebrate a huge deal, or a big wedding, or just to get smashed, but jumping off the garden wall at seven storeys is not what I feel is correct - or is it...?

One of my chums had therapy to stop him throwing himself off escalators! Funny? Maybe, but he was in Guangzhou airport once, and had this uncontrollable urge to fling himself over the edge of a huge escalator! I suppose, if I was a money man, making huge bucks for all and sundry, and that if I'd made made a cobblers/horlicks of a deal, I may feel pretty bad, but, I'd go and talk it through with my boss, or my chums, so that he/she/they could share the blame or otherwise.

No 1, Poultry is a reasonably pretty building, not entirely attractive, but definitely a place to see and wonder (in my case), how much the fee was to design the place, and how much the stone cost, because it is incredibly well put together, thanks to a damn good builder.

I shelter from the winter cold there sometimes, occasionally wander down to Cannon Street Station therefrom, but, I still wonder if a roof garden, in this volatile section of The City, is not the platform from hell.
Posted by Sen. C.R.O'Blene at 11:17 pm

Any idea how Poultry got its name? One Poultry and one Gherkin and a slice of Shard and all we are missing is a bit of fish and a bag of crisps!

En passant, if ever you feel like throwing yourself off the roof there, ponder longer and take a walk round the corner to Cold Bath Lane (EC1)which may help calm the nerves...

I've been suicidal. But it wasn't an urge to die so much as the only way to stop the pain.

Have you been there at all? It's not a bad bar actually, and I went to one private binge here once, and the grass was real, and the drrinks flowed, so perhaps they do need a bigger guard rail these days...

Now that is understandable pips - nearly been there, but not as bad an experience as you had!

Mind you, after a few tinctures on the terrace above, you'd maybe feel slightly better, and decide to stay on the safe side...;0)

Hi Scrobs, that link took me to a site selling mobiles phones! Shome mishtake or am I missing something?

Nope, I have been past the building on several occasions but never set foot inside. Nearest I ever got was an excellent lunch in the Mansion House with the then Lord Mayor (in one of my previous incarnations).

Apparently she'd been to a job interview prior to taking a sip of wine and stepping out.

When I was in the job we had one chap step out from the Whispering Gallery of St Pauls and fall onto the stacker chairs 200 ft below.

He looked like a porcupine and his cock was presented on the end on one of the chair legs.

I doubt the state of mind of the person allows for much rationality.

I have suffered a couple of career calamities myself and both were my fault. It is the self-inflictedness of it which is so difficult to get away from. Utter despair combined with self loathing.

It takes an immense amount of positive thinking to pull away from the edge.

Definitely, Scrobs: friends who accept you whatever your status make everything seem better, especially if they're buying ;-D

It's here Reevers, sorry about that!

And also apols for no easy link - just cut and paste!

(I've just been blessed with a new mobile phone, c/o O2, and as usual, the manual is written in Gibberish, formed from Arabic latters and Chinese punctuation... - hence the link...)!

Picking yourself up, like Pips did, is a different path than that of depression, but the result could well be the same I assume.

Thanks Scrobs. That looks like a very pleasant place for a chap to unwind at the end of a hard day. But I suspect that their Gruyere cheeseburger costs a touch more than the Big Mac available just round the corner!

Personally I like it a lot. The client and the planners not so much. Wasn't it awaiting a start date for some decades before finally being built?

RVI first comment. Could "en passant" not have been replaced by "en possiont" for better effect?

I think it did take years to get built, lots of the usual interference from locals, and busybodies no doubt!

Love the stonework, it's beautifully constructed!