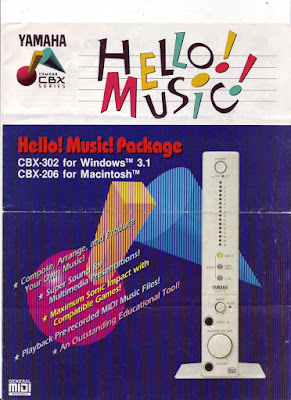 Back in the early 1990s, computers were still hit-and-miss affairs, and words like '286', and 'floppy disk' were still spoken with some embarrassment, because they were almost a foreign language. I remember someone pointing at a '386' and drawing gasps of envy from a geek who dribbled for ages at the new machine lurking in the corner of one of the offices!

YD was in her last year at school, and I used to pick her up from the music rooms, where she would always stay late for prep and extra piano practice. One evening, I found her at an electronic keyboard, with a computer screen in front of her, and several wires leading off to a new computer. She sat me down next to her and told me to make a chord, which I did. Then she pointed to the screen and there were the notes displayed on the staves! Then we played a few more notes and the harmony was created and also showed up on the screen. It also played back exactly as we'd played it!

I was utterly hooked, and totally blown away by the possibilities of all this expensive equipment. After a few more forays on the keys, we went home and for the rest of the evening, I badgered Mrs S about getting something similar, and because times were good back then, we started the research. We were within a whisker of buying a Yamaha 1200 series Synthesiser, because it nearly did the same things as all that kit at the school, but after several visits to the shops, it became clear that what we really needed was a proper PC, because the music bolt-ons could come along later.

And it was ever thus. We bought the best PC we could afford and tentatively joined the human race! Because it was near Christmas, I was in party mode, and in London for various business tinctures. On one of these occasions, I was early for a function, and spent a happy hour wandering around Regent Street looking in shop windows. Chappells had their shop down there back then, and peering in the window, I spotted the advert at the top, which shone out from a box of equipment which was exactly what we (I) wanted! It really was a magic moment!

After long discussions with the guys in the shop, a lot of money changed hands, and I nursed the box all the way home to 'The Turrets', (having of course, partaken of the various afore-said tinctures - no need to spoil a good evening)!

It worked like a dream, and once connected to a keyboard, was the epitome of composition, and for years, I was hooked into all sorts of masterpieces where I could overlay sounds and rhythms, and listen to these through earphones to my heart's content. The software was all contained on just two floppy disks, which seems amazing these days, when now you need about eight CDs just to get a letter printed!

Of course, it's all been superceded now, and the Cubase has been replaced by Cakewalk, which is too old even for Vista, and so there are new apps like Tuxguitar, and Wavosaur, which do more or less the same thing, and for free!

So, this time of year, I can always relate to hearing some good sounds, remembering some good days, enjoying the company of good friends and family, and listening to this, by the bloke who started it all for me!

Have a happy Christmas one and all; next year will be a cracker!

Wellington's Mum has reminded me of a classic piece of Mike Oldfield, and linked me to the piece below!

Many's the time I heard that theme, and there is one part of the piece which I will always remember. Simon Groom asked him why he played the theme at half speed, and Mike Oldfield quite candidly said it was because he couldn't play that fast! (Been there and bought the twelve string...)

The comments also show several people who liked that bit too...
Posted by Sen. C.R.O'Blene at 5:35 am

Excellent! Those were cutting edge times, we have become blasé about innovation now - we expect it to be a continuous process: in six months time there will be a new revolutionary phone on the market, etc..

Merry Christmas to you and yours!

Merry Christmas from all at Welly Towers xx

Scrobs...a Happy and Merry Christmas to you and yours from all at OTW and here is to a prosperous new year and lots of postings.

They were exciting times then, and I now wish I hadn't been rude to a chum who said that his Spectrum was helping him make money as far back as 1982!

Have a good Christmas, and keep those good thoughts of yours going because they're required reading!

That's prezactly what I used to say to ED when Blue Peter started up each evening!

There's still a copy of a piece called 'Chase' somewhere, but it won't play because the programme is defunct now...

Shame, because I'd have liked to hear that again!

Happy Christmas to all at Welly Towers too! xx

Morning Thudders, thanks for your good wishes!

Pleanty more postings from here, as long as you do - we can't stop now!

Best wishes to all of you at OTW!

Chappells still exists - I've forgotten where but it moved away from Bond Street. Try googling.

I deliberately steered clear of all electronic gizmos, prefering instead to try to learn to play my instrument as it was originally intended.

However I wouldn't be without the electronic wizadry in my busker's amp and guitar pick-up which enlarge my sound faithfully (to a point) And I'm just getting to grips with digital recording and uploading my music on to YouTube.

Happy Christmas to you and yours too.

"Chase" sounds like the type of piece that ends up going round and round in one's head. If I knew it, I'm sure I'd be humming it right now!

A little link for you, as you mentioned Mike Oldfield and Blue Peter.

Happy Christmas, Scrobbers. My Seasonal video is up on my blog now... using t-t-t-technology ! *bletch !*

You won't believe it, but I was only thinking this morning, that the old laptop, which still happily chugs on with Windows 98, may still be able to work these really old progs...

There's one we played called 'The Riddle of Masterlu', and dang me, someone opened a store in Piccawilly Circus with exactly the same name!

Don't hold your breath, but I now have a project to last the whole of Christmas...

Thanks Elecs, they're in Wardour Street now!

The last time I went down at the old ahop, it was rather like walking into an Aladdin's cave of instruments, and I wanted to win the Lottery there and then!

Merry Christmas Scrobs, and to all enjoying the Turrets celebrations. And a wonderful New Year.

You're task for 2011 is to decide which of your talents you will indulge and indulge away!

Why is my wv untintsl? The entire place here is tinselled-up from end to end and side to side - some of it twinkles.

"You're task for 2011 is to decide which of your talents you will indulge and indulge away!"

Thanks Hats; I will, I will!

There's a list as long as your arm to do, and like Browning “Ah, but a man's reach should exceed his grasp, or what's a heaven for?”, I'll be starting early, as even yesterday, we had the nod on one of our schemes.

It was just a nod, but after two years of devastation after the last lot killed business in UK, that nod has made this Christmas so much more enjoyable!

I sincerely hope that everyone will be able to share in anything that comes from it - like me not moaning for a change...

And a Happy New Year to you too Truby-doos!

Hope all stays well for you all!