The break-up of a once great country... 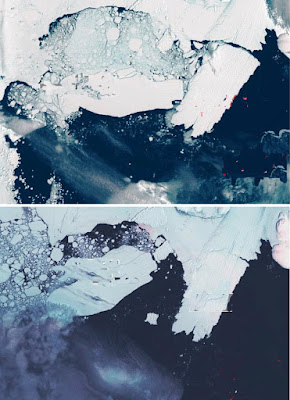 SCRINGE
Members of the Scrobs Commune for Reality, Information, Nolledge and Grand Excellence (SCRINGE), are utterly devastated to learn that one of their favourite counties, Dorset, has broken away from the mainland, and will continue to disrupt the weathermen's bonuses for at least the next three weeks!

The Chairman of SCRINGE, Mr Stourton Winterborne-Stickland, was understandably almost sober when he reported to the Quinquennial Committee during some sort of meeting in ‘The Eight Bells’, that the new Met Office computer, which has been built in Widdleplopsplashgigglewhoopsie, (a small hamlet outside Dorchester), and designed to calculate the eight times table in just under three hours, is so heavy that the old county just groaned last Thursday, and decided to drift away into the English Channel!

Latest reports mention that parts of Weymouth have actually arrived in St Malo already, and several tables have been booked at ‘Le Fat Stoopede Rosbif’ for a slap-up meat meal washed down with pints of Calvados flavoured stout. (Engleesh cash only, £30.50 per tete inclooding pooding).

Miss Amelia Okeford-Fitzpaine, a trainee marble inserter from Purbeck, awoke on Friday, to find that her cottage was approaching Guernsey at three knots, while her small cat, Blandford, was sitting in a tree on the mainland, wondering what to do next!

“There I was, nearly relocated on a Channel Island, and with not a stitch to wear”, she said to anyone who bothered to listen. But she realised her mistake on being shown pictures of herself, well kitted out with three loosely rivetted Swanage-knit jumpers, a forage cap from the Poole Offensive, and a natty pair of orange chainsaw protective trousers.

Members of the A354 Protection Society (A354PS) held an emergency meeting just outside Alderney, where most of the alcohol from the previous night had nearly been washed away by the tide. Nothing was decided as the fumes overtook the whole lot of them and one by one, they slipped into a comatose state, except for the Treasurer, who actually managed to slip into the Secretary’s room in a moment of unprecedented passion.

He was refused at the second jump, but recorded in all the sports columns of the new Continental Press Agency for the new Colony to be known as ‘Saint De La Dorsette’! It joins the new 'Devon Colony Des Anglaises', floating somewhere near Quimper, but keeps wobbling, because everyone keeps giggling because they think it is a silly name for a town!

A spokesman for The Met Office, Mr Arthur Weather, admitted after intensive questioning by reporters, that his performance-related bonus (£4,500), from the previous fortnight’s sleep-ridden ‘work’ had not actually taken into account the desertion of the old English Counties. He was in fact looking at a photograph of small piece of cloud somewhere in Essex, and quite forgot the time!

The Mayor of Avranches, Monsieur Vin-de-Pay-Asyouearn, is planning a small reception in ‘Les Jardins de Lychett-Minster’, where he will welcome all the good Citizens who decide to stay, with a good slap-up fish meal and a pooding the size of their old neighbour, the Isle of Wight, washed down with anything left over from the party when most of Cornwall was washed up a few weeks ago.
Posted by Sen. C.R.O'Blene at 6:30 am

I wish we could break Devon away from England. Sail her to the South of France.

The other day, we learned that the temperature had reached double figures.

The last time it was there was on December 9th!

I'll join you down south...

I do believe Mr Marston Bigot could be behind all this...a sinister plot by Somerset to get some southern beaches....

Lils, far be it for me to be alarmist, but did you notice the large crack in the road just outside Hinton Charterhouse? The sign is leaning too!

I have it on good understanding that the Grollie Miner's secondary shafts are being pushed though at a rate of knots!

It is possibly here that the Somerset 'disembarkment' may well begin, and I note that train tickets to points south are being suspended as well! (Ask Elecs, he's got a shorter train today too!)

It's all very worrying, especially as the Kent/Somerset border is becoming more of a reality every day...

I wouldn't trust Marston Bigot further than I could throw him, he's an utter charlatan!

I wonder if we could break Liverpool away, (minus scally Scousers), from England and join Kevin and Devon in the South of France...
If anyone has missed old Trubiedoo...I'm back after an enforced absence, due to techy probs for a few weeks...

I have noticed Scrobs. In fact the road was bloody closed for weeks but they don't seem to have done anything about it. I am all for putting a wall of tractor tyres up along the length of the A36 and asking anyone who wants to enter Somerset from the East to show their wellies first.

So it will be done Lils!

I am immediately commencing a trawl of every QuikFit in the country, well, Hampshire/Sussex anyway, to regain the necessary tyre reinforcements you so richly describe!

Miss Norriszia Croker has lent me an aging Long Wheelbase vehicle, and also her niece, Sbikallennee, (an unusual name, spawned from some grape ensemble from the Ardennes), and we are planning a coup-d'etat of every pile of tyres higher than a yard.

Make no bones about it, we will be with you, before you, and also after you - possibly in the Biblical sense if the pills work, and those radials will just sing on the tarmac!

The wellie inspectorate has been informed, and green rubber has been sellotaped to the peaks of their cycling caps just to remind them what an important avant-garde this really is!

'Tally Ho mein Liebkin, we are on our way'!

Trubes, just sling every hook you have from those lovely sensuous white boots from the panto cupboard a couple of years ago, and join the re-joined counties of Old Engerlund!

The border of Kent and Lancashire is almost ascribed, and the boundaries where Wirral meets Weald are nearly made perfect!

Lils is arranging for Somerset to join in, and there will be cider on tank for all!

We'll dance the moonlight fantastic, and also a bit of Twist from the 'Peppermint lounge', if I can remember how to put on a 45...

And we HAVE missed you, and you'll have to do a damn sight more prancing around in your high heels to get back in our good books I can assure you!

You're right down at the bottom of the timeline list with Daisers, and she's just vanished!

This had better not be a bluff... I've bought a number of beach front properties in Henstridge together with the old HMS Dipper for the odd cruise over to Le Touquet. I think it may well be the new Somerset Riviera.

It is certainly not a bluff Modo!

There was a virus permeating the computers in the Boundaries Commission, which apparently took over Miss Doris Grubble's Amstrad computer, and apart from ordering her several objects from 'Sex Fantasy Go-for-it Inc' online (which apparently she did - several times), there was a hiatus in the line drawing apparatus, which went awry, and joined several counties by parts from where they should never have been joined!

I ask you, why should Bath be embedded with the Isle of Sheppey? Why should Hastings be immersed in Droitwich?

I rest my valise!

Me 'n' the missus sailed back in last night from a well deserved break from whatever it was we were escaping from only to find the £ worth about 3d and half the blasted country cluttering up the shipping lanes to the Bay of Biscay. As we approached The Needles the Admiralty pilot was overheard muttering something on the intercom about the satnav stuck to the bridge windscreen being rather agitated. I now realise what he meant. Yohoho and a bottlarum.

PS: No, Miss Daisy was not with us.

UDI for Wessex, and fuck the rest of you. To put it politely :-)

That's a bit Harsh, Elby. You get a pass, obviously Scrobbers. Bring the family, and new additions.

Can I call you Gramps yet?

Trubes...me and my lads will start work on the knock down required to seperate Liverpool...can my lads keep the slummy?

Of course Elbers, of course!

"quang" - sound of duck running into bottom of preserving pan...

I'll have to change the photograph though, as I've dyed my eybrows in preparation for being the next Chancellor of the Exchequer.

Still at nailbiting stage on YD's state of play, probs next week...

Welcome back, and how the devil are you eh?

Sounds like they put the flags out a bit early, but with satnav these days, you were lucky you didn't end up at Boulters Lock or worse...

We have of course missed you comments, so please feel come back when you've demolished the duty-frees...

Thudders, there has to be some sort of programme for that job.

Which bit exactly do you want to knock over?

I've still got a wrecking bar somewhere in the bathroom cabinet...

Hello Scrobs. Since you kindly asked, I'm very well thank you. Rested and ready once more unto the fray. Indeed, I sharpen my fingernails as I type!


(You have been warned!)