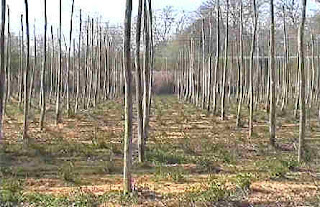 About this time of year, I always find this pic a bit of a sad reminder of what was a huge part of life when I was much younger.

My Dad was the chief engineer for the largest hop grower in the country, and his work meant that he researched, designed, and eventually built the state-of-the-art machines and oasts which picked and dried the hops.

Up to the fifties, the traditional way to pick hops had been to bring folk - mainly from London in this area - and install them in hopper huts on each of the farms. It was a riot, great fun, and without touching on 'social' issues, most people who came down made a few quid, and enjoyed a working holiday in some great countryside.

Because the farms were so spread out, the 'guvnors' had early versions of radio telephones installed in their cars, vans and Landrovers, and I, and a few other sons were paid £2 a week to take messages on these things. It was very important (!), and drew gasps from other kids who thought that such space age kits only worked in police cars!

But driving round Kent these days is a bit nostalgic, as 'farm quotas' and general interference from the usual suspects who detest farming, have all but driven the UK hop growing business away for good.

I can't really get to grips with seeing bare wirework like this, especially if a few solitary bits of bine are still blowing in the breeze...

Autumn hits you right between the eyes in your part of the world doesn't it Scrobs. Mists and melancholy. My Girl told me a sad story, that her Grandpa had knocked down a couple of oast houses in the early 70's because his tennant farmer found them a nuisance!

Oasts are notoriously difficult to turn into homes Lils - and difficult to maintain if they are not used for what they were built for. They're often in the wrong place too, usually too close to the road, (which might have been a farm track when they were built)!

The older ones - tiled that is - actually had specially made tapered tiles, which are sold at a premium these days...

Actually, they make nice places to live in, if you want a circular kitchen, furniture sticking out in all directions, and high ceilings...but then I would...

Kent mornings these days are misty from both aspects I can assure you.

Way to go, scrobs! You are the fruit of the loins of a fellow without whom the production of hops and the resulting beverages would have been severely diminished.

So, where do they grow hops now? I'm sure I saw some near Petersfield the other day.

You're right Iders, luckily you live near quite a few growers, and independents are still dotted around - especially in the S.E. and Hereford/Worcs! There are still some in Kent too thank goodness!

In fact, a quick Google map of the area near Selborne shows - I think, (can't totally recall the exact location, 1973...) - some of the hop gardens set out by the fair hand of yours truly...

Having got outside three Shep's yesterday afternoon, I'm glad they're still grown too - the Old Man would have liked that!

Scrobs - despite possible appearances to the contrary, I emanate from the east end of London and still recall as a very young lad our farm holidays, in the late 1940s/early 1950s, hop picking in Tenterden. I agree with you it was great fun, and a very healthy way of spending a week or two in the unpolluted countryside, although of course we did not worry about such details in those far off days. Even now, I can clearly remember sleeping in a hay filled barn and the call of the "pole puller" on his rounds. Life really was so much simpler and happier in those days despite the post war hardships our parents had to endure. The youth of today really do not know they are alive, do they?

but what fond memories you have...it put a little smile on my face to think of a young scroblene feeling all "police important" with his messaging...very vivid memory, thank you for sharing...btw autumn is my favorite time of year, seems to do me well for some reason...

Was it at Tenterden station you arrived then?

The farms we were on were a bit to the west, but I can remember the trains pulling through the various stations along that route as if it were yesterday.

There used to be a big van which went round all the gardens, playing records over a sound system. Paul Anka's 'Diana', was the big hit that year, and I knew all the words within days!

A good chum bought a field locally, and told me that it had once been a cinema! After beating him round the head and saying that he was pulling my plonker, he mentioned that about thirty years ago, they's shown films there!

And he was right - it was indeed one of the film sheds where hoppers could see films for a few pence (old money)!

Daisers, Mrs S rates autumn as her favourite season - everything's done, all we need to do is pick the stuff and clear up!

And we've been doing just that today too...

On the other hand, I may need to light the new fireplace soon, as it is getting mighty cool all of a sudden!

Talking of looking all police important (I like that), I remember some little lad peering into the car and betting me that I wouldn't talk into the mike.

Scrobs - regrettably the mode of travel eludes me after all these years as I was only about 4 or 5 at the time - and Paul Anka was probably not even a twinkle in his daddy's eye! I do, however, have lucid memories of clambering into the back of a green Leyland lorry with a canvas roof over the back, and mutterings about Detling Hill and the Seven Mile Lane, so maybe we went by road. At that time our only train journeys were from Victoria to Sheerness to stay with relatives (who subsequently got flooded out in the 1951 inundations and moved to the Midlands). I can still recall being completely deafened by a steam loco pulling into the platform at Sittingbourne station with the steam valve going at full hiss. You could feel the shock waves from that big black smoke belching monster! Quite terrifying to a four year old! Some memories never leave you.

My friends parents live in a converted oast house and have done for most of their married life (well ovr 30 years). It's in Kent (near where I lived for a little while) and I always get lost when I go there. I'd never find it on a dark night.

What do I remember most about it? It's beautiful, quirky and her aunt wears Chanel shoes.

Is the lack of English hops the main cause of the demise of Real Ale? No wonder the Eurocrats want Kent to be turned into a parking lot!

With your apples and hops you could make several pints of snakebite - do you have blackcurrants as well?

Detling Hill leads up towards the north Kent farms near Faversham (Shepherd Neame country), and Seven Mile Lane stops near Whitbread's Hop Farm - now a 'venue', for all things similar, and with all the original oasts etc.

Sheppey was pretty remote then, and now they've put in the new bridge the place is beginning to take off. If you go right over to the east, its like a time warp, and very pleasant it is too!

Sittingbourne station will soon be joined to the High Street, if the planners get of their arses, and start making things happen a bit quicker.

They have 'Beer-ale', for men, a sort of cologne which smells and tastes like the real thing, but you buy it by the dribble.

For the ladies, (apart from the shoes you mention, which are designed to stop those dainty pins from being scarred by the rough brickwork in the kiln areas), there's 'Sacking', a reference to the hop pockets which used to contain the hops before they went off to the brewery. This material is incredibly strong, violent on the skin, but eminently attractive to all those blokes who used to wear a bit across the shoulders when it rained!

Of course, it is thorn-proof, wind proof, but hopefully gains many points at the Hunt ball, as most of the young farmers will flock to the feet of the wearer...

As you quite rightly say, one expects to get lost in the Kent Lanes - they're designed for that. I'm surprised you're still here actually!

For years, we used to make a sort of wine which had elderberries and dry cider as the main ingredients.

I'll blog it soon - a story goes with it of course!

Just thought I'd pop in this quote by Philip Johnston in the Telegraph today.

"Since Labour took office, the number of people working in the public sector has grown by 600,000

Figures released a few days ago by the Office for National Statistics showed that while people are losing their jobs in the private sector, public sector employment increased by 13,000 in the second quarter of 2008 to 5.771 million. In 1997, the number was 5.173 million.

Who are all these people? They are not all doctors, nurses, policemen or teachers. Mostly, they are administrators, pen-pushers, inspectors, quangocrats, outreach officers, box tickers and busybodies: thousand upon thousand of them. They include the cigarette wardens that make smokers' lives a misery and the corporate-speak officialdom that has driven Inspector Gadget and his colleagues to distraction".

Its the sort of news which makes me get up on my hind legs...

Scrobs(ers) - yes I knew most of what you write, having been a resident of one of the Medway towns for a while in the early 1980s; plus having an offsprung one at university in Canterbury.

That original clickety-clackety swing bridge over the Medway river brings back many childhood memories too! As does walking the cliffs between Sheerness and Minster past the firing range.

Life is water not stone.

RVIers, We had Elder Daught at Canterbury for the duration - and very happy she was too!

I was working there at the time and apart from term bwginnings and ends, I think we saw each other in town only half a dozen times; which suited all of us! Good pubs too!

Many thanks Elecs - you're a bright star, and I appreciate your comment.