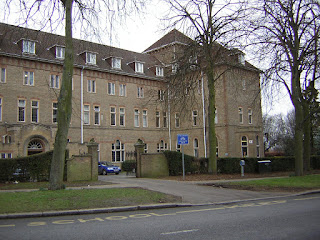 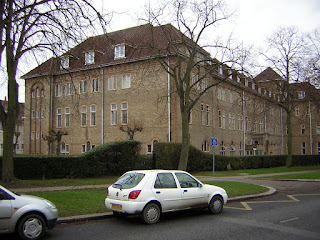 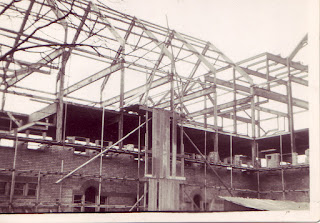 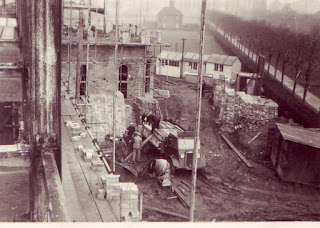 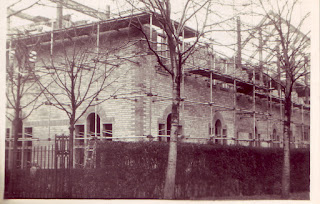 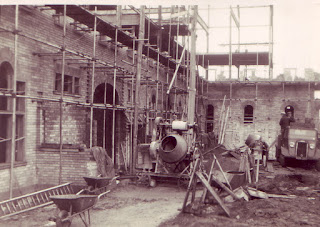 Aunt Basil - Sarnie prompted me to record a fascinating detour I made one afternoon last year.

My Dad was a builder through and through. And so was his Dad. And so were my two Uncles. My Grandfather built all over Hertfordshire and Bedfordshire in the nineteen twenties and thirties, and did some superb buildings, most of which still stand today. Dad and my two Uncles also worked in the family firm.

While clearing out the old house years ago, I found the family photographs, and as is usual, there were the old favourites I recognised from when I was a tot, but there were also many I couldn’t place, because I hadn’t been born (or even thought about) when they were taken!

The piles of photographs included several pictures of old building sites, and most of them were unidentifiable. But I kept them, as somehow, they seemed to represent some of my history, but I secretly wanted to find out where they were taken, and whether the buildings were still there.

Cut to earlier this year. I had a meeting with a property man from the area who knew Hertfordshire incredibly well. So well in fact, that when we met to discuss a scheme I was involved in, I showed him the photos, and he immediately came up with several places where he thought they were taken. These pictures were taken in the early 1930’s, so they weren’t that brilliant, but there were several defining images and details of design, which would have been instantly recognisable – if I’d known where they were! It could have been anywhere!

I was finally given two towns to look in – Welwyn Garden City, and Letchworth.

A few weeks later, I was driving back from a meeting, and on a whim, found I was actually driving through Letchworth (which always gives me a warm feeling of ‘Deja-vu’, as the old family firm was based there in the twenties, and, drifting along in some slow traffic, I just casually looked to my left and saw the name of one of the roads, which my chum had described.

The Scrob-mobile reversed like a rocket, and like a nosing Jack Russell, ears back, I drove down a beautiful leafy avenue, which is what Letchworth’s all about – the First Garden City!

You cannot believe the utmost joy I felt when, suddenly, there, right in front, was the actual building! A huge building! Built in the early 1930s as a College for Girls, and looking just as it had been in the old grainy black and white photos. And it was some of my own history.

It was a magic moment – the world stood still, and there was a lump in the aging throat dear readers…

No stopping me now! I called in and met the Librarian, and she was also overjoyed to see her College in pictures never ever seen before, and with some provenance and proper credentials from an aging idiot, who was reeling about, standing on one leg and all excited at having tracked down the elusive building site!

It really means something to me, all this. You can’t make it up can you.

Hi Scobs: What an interesting story! Is this building still a girl`s school or has it been converted into apartments or similar?

It is indeed a great thing to witness your family's erections some 80 years on.

Obviously when Scrobs & Sons built something, it stayed built.

That's fantastic! Trouble with buildings from my past is... they've all been demolished.

It was founded as, and still is St Francis College for Girls. Its an independent college.

What I wanted to find was a plaque or something, but no luck!

Idle...let's hope they do anyway!

Did you notice the way the site was set up? Imagine the Health and Safety anoraks going there today.

Chris...Don't worry about them (unless you mean the buildings they knocked down to build a supermarket)!

Ahhh Letchworth, it is indeed a place of nostaligia. I grew up there from the age of 11 and left when I was in my late twenties and now reside a the slightly more grand version of the Garden City experiment which is Milton Keynes.

St Francis College is indeed still a private girls school. It was known locally (at least to us pubescent teenage boys) as St Fannys and had a reputation, certainly undeserved, as a latter-day St Trinians. The girls and school building with its soaring windows were the object of many an under-mature fantasy. Nowadays it no doubt prompts thoughts of a girls-only Hogwarts as there is more than a passing resemblance on a dark winter's night.

The school building itself sits on a road which contains some of the most grandiose and spectacular examples of Letchworth's fairly unique and idiosyncratic architecture of the original Garden City pioneer's period. If you family had anything to do with it then you have a right to be proud.

Its great to see the trees are still there too, albeit pollarded to the bone :-) What a treat Scroblene!

When I was at university I lived in Leamington Spa in Charlotte St. My mother started doing genealogy for her mother's father's family, starting in Nottingham where she had an inkling they came from. She found records (Edwin Walter Woodhouse is an unusual enough name) and it turned out the family had moved from Nottingham to Leamington Spa in the early 1800's and thence to New Zealand. Guess where my great great great grandfather lived? Charlotte Street, Leamington Spa!

You're right. I need to send some of the photos to Cammel-Laird's, and some to a town called Carcouet in France, and some to the Stade de Geneve.

My family were shipbuilders and miners.

I'd need either a submarine or a bloody big shovel to examine their legacy. (Good miners but crap ship builders I'm afraid.)

IanB - Thanks for that! Of course, it would have become 'St Fannys'... (an old chum used to ride a very unreliable Francis Barnett motorbike - known as his 'Fanny B')!

I like bits of MK, and was involved with the old MKDC when all the industrial units went up. Eventually, I also got involved with Xscape, but that's a different story...

I wish I could find more sites; there is one more which I'll do later on, and it really was a blast from the past!

It really means something when you realise that all this happened to people who didn't think that possibly there'd be a return to the fold...

I'm afraid I only have memories of digs in Ashford, and I hope none of my forbears lived in the same house, as the loo seat was sellotaped up!

Aunt! Eventually, everyone will know everything about everyone if we keep going on like this!

Electro; I think I'd rather do what you do than go down a mine.

Is the Eurostar celebration warranted today? I think so, as I've been watching it being built every day, and only been on it a couple of times!

That's so cool... a piece of living history - and how coincidental that you should just see it there. Sadly the only buildings worthy of note in our family photo albums are insane asylums or prisons.

It's a pity it took the Luftwaffe to do that for us, Ed.