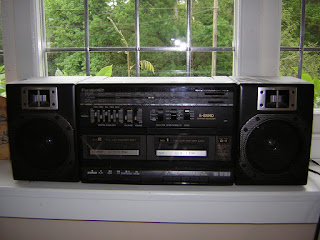 I read this week, that very soon there won’t be any music cassettes in production, as they have been superseded by MP3 players, Ipods and the like.

So what the hell do I do with the three hundred odd music cassettes that I’ve got stashed away then? Also, there’s a two-foot high pile of LPs in the roof, and also a box of 78s (cost me ten bob in 1968). I do have quite a few CDs as well, but they don’t count here.

I don’t hoard these things as I still like playing the cassettes in the car, (they are the only things that play in a cassette player, funnily enough; CDs were hardly invented when my car was made…). I can still get the guitar solo from ‘Cinema Show’ from ‘Selling England by the pound – Live’ at full decibels, and even the traffic in the other lane on the M25 slows down thinking they’re going to be treated to yet another prang…!

So presumably, I’ve either got to buy them all again, or download them, or borrow them and copy them, beg them from Daughts, or spend ninemonths putting them on my PC with a new record player (more cost).

I’m going to use younger Daught’s old ghetto blaster in the shed, keep the car forever, and use the portable CD (£9.99 from the supermarket), on the train in front of every MP3/Mobilephone/DVD playing owner, and watch their faces as I extract the machine gently from my battered briefcase, place the rechargeables softly in the slot, and turn up the volume to maximum so everyone can hear me enjoy ‘Owner of a lonely heart’ at 8 million decibels!

Hmmmm - getting whistful over LPs, 78s, 45s - OK by me, but the cassette? All I can recall is the C120 ones permanently fouling up my car tape player (the Cortina!)

But I've paid for them Tony! Why do I have to buy them again? Their intrinsic value must be over £4,000!

I only did the 'post' because you moaned at me for not doing anything this week!

Everything's going wrong today, and so far, it's been crap. I'm waiting until 6.00pm when I'm going to share a huge drink with Mrs S because I love her, and then I'm going to go to sleep in front of the TV, then take the dog out, then go to bed.

Ahhh, the 6pm watershed, a disturblingly important moment here in Tuscany. I hope by the time you read this clam has been restored by the restorative. I'm not sure what the law says about ownership of a song on one medium vs. another I suspect though that it will not be good news for your £ 4k. Have another large glass and remember - it might be worse, you could be Tony and Cherie's removal man.

or even calm! Though "clam" has a nice ring to it.

Sure enough, things did get worse, and after some order was restored, the large glass appeared to quadruple as if by magic...

Now if there had been a 'clam' involved, well, you know how some people react with vongoli...

I'd buy up as many old players as I could.

Or just keep buying the Daily Mail as they are continuously giving away free compilations. I have an unbelievably large free CD collection now.

I've just been into town to take my lady out for lunch (she works there). We ate panninis on the cafe sun terrace with a glass of ice cold Peroni each. Then went down onto the promenade to look at the sea and have whippy ice cream. Just to make Tuscan know what he's missing !

I think I will EK! There are these 'retro' machines for 150 quid with just about everything to play stuff these days!

I sold all my early LPs in 1973 when we were hard up. I got £4, and nowadays, see some of the Bob Dylan ones selling for squillions - makes me weep really...

Glad the weather's fine where you are, you've got a good balance of life for a Friday!

Not a good balance for the weekend though, I'll be working :-(

Sorry you have to work the weekend.

I haven't had to work on Saturdays since the 60s, when we had to do alternate Saturday mornings at the estate agents (don't you love 'em...) where I was based. As junior, I had to man one of those awful office telephone exchanges, and regularly squirted the noise of the ringing bells down the ears of the partners!

After all the bollocking, I really said 'Sod it', and went on to better things.

I must say, however, that now I am continually involved, night and day, seven days a week, in our development business, which takes up every waking hour; I really enjoy talking to good guys like you, and Tuscan, and Hitch, Lilith and Hatfield Girl, and even Guido and Iain Dale, when I'm feeling vociferous...

So that, in a nutshell, is what I'm doing at the moment, and life ain't as bad as it's cracked up to be.

Have some good moments on me this w/e anyway!

EK, straight up, as they say, I worked a Mr Whippy van out of a foul place in W Sussex called Three Bridges, after 3 days of having to park up against walls so the little scrotes couldn't deflate my vehicle tyres, and the realisation that my MK III Cortina was being used by others with a similar key whilst I was working the Meadvale (South Reigate) council estates, I gave up. My last day's takings was £ 3.60, I've never forgotten that number.

Duncan Bennetine started in ice cream vans - now £80 million business portfolio (property, care homes). Perhaps I should look into ice cream - not because there's money in it, but it seems like the kick up the arse to get one started.

Boyfriend has bought some external box thingys for the pc. Holds a "terrorbite" or some such of music. He has uploaded all the cds and every time he wants a new one he gets it second hand for a few quid off Amazon then resells it..reckons most new albums cost an average of £3 that way. Its great because all the music is in the pc and there are no jewel cases lying around everytime you have a music session.. We have a huge and varied archive which includes five months worth (if played back to back 24/7) of live Grateful Dead :-)

The speaker quality is not as good as my stacking unit stereo but its good enough and the music can be reburned back onto cd for the car.

I have been advised by elder Daught, never, never to take my portable CD player on the train...

Mind you she does'nt like me wearing jeans and a suit jacket... now that is my sort of style, especially as the suit trousers have worn out!

I laughed at this one. When I was growing up in the 60s, my brother and I used to laugh at my Dads 78 collection. He had quite a few and they were so old in our mind. Guess what my young kids are going to think of our CDs and Cassettes.