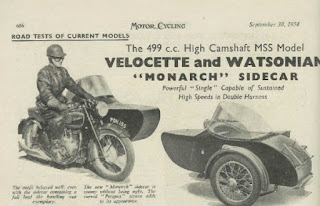 After Mr Sid Trumpet absolutely trounced Ms Billary last year, the Sodden Prickney Parish Council has been in turmoil, as previously reported in minute detail by your erstwhile correspondent on several occ (just get on with it - Ed) asions!

It is now understood that Chairman Basil Kalashnikov has sold his Wayfarer De Luxe camper van and purchased a Velocette motorcycle and sidecar for his weekly visits to the Parish offices and also Lidl. This has caused outrage amongst Globule Worming agitators as everyone with a single ounce of interest in ancient motorcycles knows that the Velocette still uses a mixture of 4* petrol and a squirt of Castrol R, and this is only available from Miss Newt's Retail Emporium in pint bottles, priced several pounds a pop, and can emit that delightful odour at the tweak of a throttle!

Ron Groat, (Miss Newt's confidant and intimate companion) manages the stores of the 645,000 retail extravaganza, and categorically denies any wrongdoing. As nobody really understands or actually cares about the issue, it is difficult to understand what the fuss is all about, but when PC Lumbersnatch, a part-time walk-on actor in the local little theatre (closed for repairs after the unpleasantness in the musical production of 'Ten Rillington Place'), arrived with a stub of pencil and an old exercise book, to take notes, there was nobody around!

But to get to the point of this essay (about time - Ed), Sid Trumpet is now Councillor Sidney Aloysius Trumpet, Chairman of the Woys and Mange Committee on the council, and has a huge mandate, even bigger than the previous incumbent! He is planning a new fence around the village carpark, to keep out the riff-raff, and also a new factory on the estate, for the sausage manufacturer, 'Bangers-r-Us'. This is to stop any imports of snags from elsewhere in the country, and has been met with acclaim by all right-minded citizens. especially the Sodden Prickney Snorkers Appreciation Society.

While Ms Billary's cohort, 'Willy' Clinchton is no stranger to 'sausage' issues, it is clear that this is a snub to the former Councillor and silly old man. Ms Billary was seen in the audience at the celebrations, clutching a Kleenex, and rolling her eyes.

Mr Kalashnikov now has to work day and night to convince the council that even a single vote for a minor party in the area, The Literal Deniercrats, would mean so much for their candidate, Ms Emily D'Artagnan-Minge who loves children and wants to see the world. He is also having to deal with the press for being as pissed as a fart on most occasions.

1. My pater had one of them infernal machines (of if not an exact copy, something exceptionally similar) just after the war when he was chucked out of the RAF and I can still recall clutching the sides in terror as we sped down the Commercial Road in the direction of West Ham at at least 30mph. Not exactly Split Waterman, but something similar. Them was the days my friend! Happily, he soon replaced it with a 1934 Bedford lorry where my hallowed place was in an old armchair under a tarpaulin in the back. Can you imagine the furore there would be these days if a 5 year old was demoted to the back of a truck??? (But I loved every minute of it!).

2. I watched the "celebrations with great interest and, if you ask me, Ms B was not exactly "rolling her eyes" - more like glaring extremely sharp daggers at her consort who was fully occupied ogling the assembled totty on the other side of the aisle! And,let's face it, who can blame him? :-)

But my telly may have shown a different view to yours...


PS: If you can't recall who Split was, Goggling is your friend. But I show my age....

I'm getting there Reevers, my good and trusted friend ;0)

Don't believe a word from the BBC, they'll try and brainwash you! Watch Fox News instead!

Try again. Tried to post three times but each time got an interruption from Google telling me to sign in. Bit odd that as I have nothing to do with them! Anyway...


Nope, not even close. Try searching for his full name in your search engine - and bear in mind the topic under discussion...

Regrettably, we have no access to Fox News hereabouts, although they do have reasonable sports coverage, especially if you are into baseball, American "football", ice hockey and super-cars driving at high speed in circles.... They used to be called ESPN at one time.

However, we do get Sky International and the unadulterated biassed rubbish being spouted by their female US correspondent earlier today should warrant the withdrawal of their accreditation and removal from the country. Sid does not like fake news so he should take positive steps to stop it. Likewise for the loony lefties who "report" for the so-called BBC.

(Hope this gets through this time}.

I'm sure Sid Trumpet is on the right lines with his new fence around the village carpark, but making the riff-raff pay for it could be tricky.

Ah got it Reevers! I haven't watched speedway for years - must get out more!

I get all the news from this site below, it's a great unwinder!

Sorry you had to keep logging in, I'm not sure why that happens, but at least you got here eventually!

I expect Cllr Sid will have thought of that, Mr H, and will be issuing Anti Slack-jaw notices and excessive fines to cover the cost.

Hi Scrobs,
I am sure you already read.glance at it, but if not may I suggest you drop by
at going-postal.net for humour, information, music, cartoons and terrific banter.

Lots if UKIPPy type folks on there too.

Please ignore if you already visit.