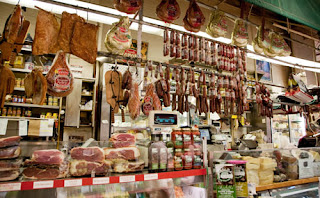 What happened to these delightful places?

Mrs Scroblene and Scrobs can hardly be described as foodies, but we still enjoy non-junk food, especially as we've grown a lot of it ourselves.

Several years ago, there used to be a fabulous shop in Rye High Street, known as Millers. We vaguely knew the owners, who both worked hard behind the counter, and my dad would spend ages in there, drooling over the great displays of hams and cheeses. He once bought a half-stilton, and religiously fed it with port until the Christmas celebrations started, and most of it had gone by the New Year...

These days, you have to search hard to find a place where you can buy the real thing, rather than a pre-packed, tasteless object with some silly name. We now find that it's quality rather than quantity which is the norm. Gone are the days of a big steak or a fat burger, so we search high and low for the best we can afford, and buy just a little of that particular comestible, and it seems to work too!

There is a new genre of farm shop appearing in various places too. Locally sourced groceries and fresh bread and fish all come at a premium, but at least it looks good, and just a couple of slices of this, and a small piece of that is becoming a bit of a habit these days.

I often wondered what our shopping habits would have been like had we stayed in Rye. Millers has long gone, and the Budgens is dire, so it would mean a car journey to Jempsons in Peasmarsh for the next best thing!

Couldn't agree more mate, although out in the sticks here there are a number of small local (Chinese owned/run) shops selling such goodies (at a price of course!). They import much of it from different parts of Europe. But as you intimate, you have to know where they are and take your credit card along for the ride. Most supermarkets sell a wide-ish variety of original French cheeses, but ham/pork products are generally out of bounds (kept hidden in the non-halal corner at the back somewhere).

I do not know if this is also true of the UK, but over the past year or so there has been a huge surge of real bread do-it-ourselves bakery shops which serve up delicious varieties - a far cry from the usual factory produced mushy cardboard! My favourite is owned by a huge German fellow who immigrated a short while ago and set up his bakery. We frequent it frequently (see what I did there?).

Interesting point you make about bread Reevers. Our local bakery is selling more exotic types these days, like sodabread, GI bread (gorgeous, but Mrs Scroblene has gone off it for now), spelt and a few others! They also do the whole range of shapes and sizes, and our chum behind the counter knows all the names off by heart...

Do you have an M and S over your way? Probably a silly question, but the Thai ready meals they sell here aren't that bad, at least, they're better than yer actual Chinese takeaway, which usually plagues most secondary streets round here!

We suddenly realised after sharing one of their prawn dishes and feeling full up, that it was in fact intended for just one person...

We have a local deli and a number of others within easy driving distance. Lots of choice for pies, steak and stilton being a favourite and a fair range of other goodies, but we don't have a really good bakery so we have to bake our own. Sainsbury's bread is dire but the Co-op is okay if we don't feel like baking our own.

'a little bit of what you fancy does you good' a small amount of good if expensive meat is my choice nowadays rather than some of the larger but tasteless cuts sold in the supermarkets and home made bread and cakes are part of the daily routine here.

Ho Scrobs, Yes indeed we do have an M&S here, but rarely go there as it is one of the most expensive shops in town. Selling here at UK prices means their establishment is usually bereft of customers and I cannot believe they are making any money. Their food dept seems to consist mainly of sweets, tins of biscuits and exotic jams. There is no fresh food area.

We also don't mind those bake-your-own baguettes, Mr H! Would you be using a machine?

Sounds the sort of nosh which would be well accepted here too, Thud!

Aren't 'rolls' called 'cob's in your's and Mr H's neck of the woods?

We still have FOUR HUGE tins of 'Treeslets' from Christmas, Reevers, and although they came from Tesco, we still have all the other biscuity/spuddy/nutty things I bought back in early December...

BTW, M and S chow mein is dire here; prawns are pretty good though! Rumour has it that the prawns are actually harvested here, then FLOWN over to factories in the Far East for shelling, then brought back here for packing!

Yes I use a bread-making machine unless I'm making a spelt loaf. It doesn't make a good job of those.

Your dad used to spend ages in there and once bought a half-stilton?

I think you just answered the question about why the shop isn't there any more...