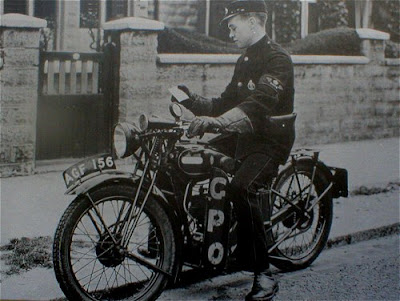 'Sergeant Wilson's motorbike' is taking much longer to write than I ever imagined!

I've had to scrub round the ecene in 'The Bells', where Captain Mainwaring has one over the eight, and sings 'Eskimo Nell' at the top of his voice, and upsets the Vicar.

Gone also is the bit where Private Pike experiences - er - feelings with the young blonde cashier at the bank, and has to go home early.

Scrapped - yes, SCRAPPED, is the hilarious scene where Hodges has to return to the hall to find his trousers!

It beggars belief that us case-hardened comedy writers (with a whole freshly edited blockbuster novel in the can; oven-ready for publication at the drop of a hat)*, can have so much on their plates that even the metaphors dry up!

I promise that it will be ready soon, and that's as good as a definite maybe isn't it?

You're such a tease.

That's another set of tenterhooks that I'll wear out this week!

If your metaphors are drying up, may I humbly suggest you imbibe more liquid? As granny used to say: A shot in the glass is better than a shot in the [censored].

There just aren't enough seconds in the minutes Pips!

It is just not happening as quickly as I'd hoped, but there again, I am getting on a bit...

Killers, I wouldn't dream of wanting you to have to go through all that for another week!

It may take even longer, and pleazse don't go buying those cheap tenterhooks on offer, they won't last you know!

I should really Reevers, but the 'Four Bs' Diet (a result of the 'Bastard Blair Brown Balls' disgraceful fiscal malfeasance) is that we are trying to avoid those luxuries at all costs.

So, as I said to Pips, and Killers, it's taking a bitt longer, although perhaps it just seems longer...

Can't remember who said "you can't out wait a bureaucracy", but the same seems to apply to favourite blogs!!

Can't remember who said "you can't out wait a bureaucracy", but the same seems to apply to favourite blogs!!