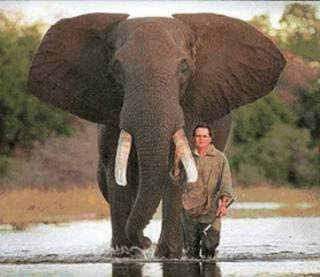 In 1986, Peter Davies was on holiday in Kenya after graduating from Northwestern University.

On a hike through the bush, he came across a young bull elephant standing with one leg raised in the air. The elephant seemed distressed, so Peter approached it very carefully.

He got down on one knee, inspected the elephants foot, and found a large piece of wood deeply embedded in it. As carefully and as gently as he could, Peter worked the wood out with his knife, after which the elephant gingerly put down its foot.

The elephant turned to face the man, and with a rather curious look on its face, stared at him for several tense moments.

Peter stood frozen, thinking of nothing else but being trampled. Eventually the elephant trumpeted loudly, turned, and walked away. Peter never forgot that elephant or the events of that day.

Twenty years later, Peter was walking through the Chicago Zoo with his teenaged son. As they approached the elephant enclosure, one of the creatures turned and walked over to near where Peter and his son Cameron were standing. The large bull elephant stared at Peter, lifted its front foot off the ground, then put it down.

The elephant did that several times then trumpeted loudly, all the while staring at the man. Remembering the encounter in 1986, Peter could not help wondering if this was the same elephant.

Peter summoned up his courage, climbed over the railing, and made his way into the enclosure. He walked right up to the elephant and stared back in wonder.

The elephant trumpeted again, wrapped its trunk around one of Peter legs and slammed him against the railing, killing him instantly.

This is for everyone who sends me those heart-warming bullshit stories, and no, I'm not going to send it on to anyone else!
Posted by Sen. C.R.O'Blene at 5:40 pm

So very heartwarming Scrobbers...I hope the elephant had better luck than this one

The elephant is a funny bird
It flits from bough to bough.
It makes its nest in a rhubarb tree and flies just like a cow.

Something I recall from way back when and which I think might have come from the late, great Spike's brain.


Lilith: That woman is an insult to humanity and should be put down.

Grumpy G! My mama used to quote that Elephant poem to me when I Was a wee nipper! Although she says "whistles like a cow".

Very amusing Scrobs, and I agree - I really don't like those group forward emails either!

Lils - that put an unpleasant taste in the mouth...

Exceptionally unpleasant person that, who hopefully will receive several years of insults because of it.

Grumpers - love that poem! Could well be from the Milligan stable, and well worth an airing - thanks!

Merms - how goes it?

You and I can now breathe in peace, knowing that we both won't send each other brain curdling copies of 'please forward and save the world's pillocks etc'...

The World's pillocks are the 646 politicians we pay enormous expenses to, and are'nt they going to get some flak for a long, long time to come!!!

Grumpers and Merms, jokes about elephants

Scrobs; Thanks. No doubt they all came from the Jumbo book of ....

I am utter UTTERLY sick of my in tray being full up with this soppy bollocks.

I'd missed an email from Tuscan because of it.

I may pinch this if you don't mind.

Be my guest Elecs - a lot of them come from Ireland, and somehow they seem to be the most religious/schmaltzy.

I don't mind living by the rules, but to plague inboxes with unwanted stuff is a bit tedious!

GG - you come back here and bring the coat back too...!

Yessir, get fell in sir, at once sir, three bags full sir...

this got a laugh out of me this morning...and i was thinking while reading...that dumbass is not going in there is he?

So glad to see you back in the circle again!

I'll keep trying to be funny...

This is snitched from Theo's. relevant, but just the teeeeeniest bit rude..