For Philipa (from a cell in Tenterden nick...) 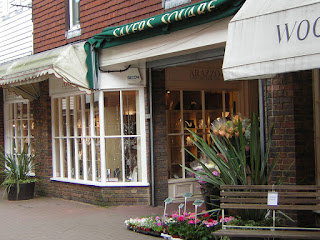 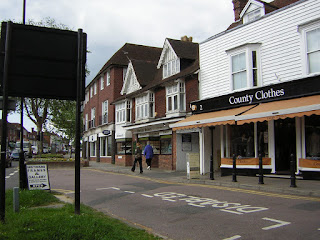 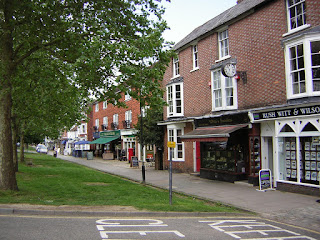 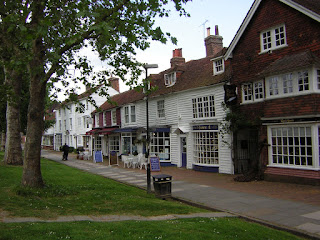 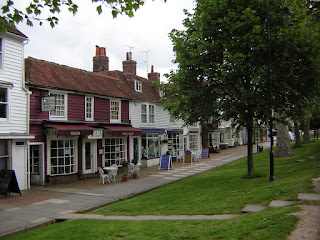 Extract from an interview in Tenterden Police Station…

(IK) ‘So; you’ve been spotted taking photographs of jewellers and other shops in the town then… SIR?’

(IK) ‘But these shops contain valuable items of an expensive nature Mr Blene…!’

(IK) ‘Make a note of that Constable…’

(IK) ‘So why the photographs anyway?’

(Scrobs) ‘They’re for a friend Officer…’

(IK) ‘Make a note of that Constable…’

(IK) ‘My little joke you understand…! So how do you know her then Mr Blene?’

(Scrobs) ‘Er…O’Blene if you please Officer. Errr, from the Internet…’

(IK) ‘Make a note of that Constable… So you know her from some website on the Internet eh?’

(Scrobs) ‘Yes, she’s a Mermaid, used to live in Moorgate!’

(Scrobs) ‘No MOORGATE – are you deaf or something?’

(IK) ‘That’s enough of that, bloody sauce! You have this girlfriend whom you’ve never met and she knows a girl who dresses up like a Mermaid? Seems a bit odd to me… doesn’t it you Constable?’

(IK) ‘So she does exist then, but you don’t really know her at all…!

(Scrobs) ‘I know Lilith from the same website and she’s gorgeous!’

(IK) ‘Aaaah, so there are more lovely ladies on this ‘website’ are there?’

………….(IK gives a knowing wink to CO, who seems to be fidgeting, breaking out into a sweat and turning red…)

(Scrobs) ‘ Oh yes, there’s Trubes, and she’s got legs that go up to her armpits; used to be a dancer!’

(Scrobs) ‘And Daisy, who always drops by when it’s night time…errr… she lives far away you see…and Janers, but I haven’t seen her around recently…and Hatfield Girl, she’s got a PHD in just about everything, and always talks sense…they’re all lovely really…’

(IK) ‘I’m struggling to get the picture here Mr Blene; you’ve been seen, walking around Tenterden, taking photographs of various jewellers’ shops, and you say they’re for friends of yours whom you’ve never met, and…. Ooooh...I say… wait a minute…, there’s one here of a ladies undergarment shop…’ (takes out magnifying glass).

(Scrobs)’ Yes of course he is, he used to wear those special rigger boots and once lived near Midhurst, near Idle’! They both like hunting shooting and fishing!’ Tony deals in olive oil. Idle is a gun and wine expert…’

(Scrobs) ‘Oh no Inspector, he’s a chap who keeps changing his website, I think he’s ‘The Beast’ this week… Apparently he’s an awfully nice bloke!’

(IK) ‘You’ll be telling me next that you know someone who gets letters from ten times as many ladies and seems to know all of them intimately…!’

(Scrobs - indignantly) ‘Electro-Kevin is a personal friend, and I won’t hear a bad word said about him! He’s very fortunate that’s all!’

(IK) ‘So these people exist in your mind, as well as on the Internet then? Seems odd to me, but…errr… any chance of a few addresses then?’

(Scrobs) ‘Of course Inspector, just Google ‘Verity’ and you’ll get the best answers of the lot!

(IK) ‘Make a note of that Constable…’
(CO) ‘Right Sir’.
(IK) ‘You’re free to go and return to your car Sir, thank you very much for the addresses; a plain brown envelope would have been be better, but they will suffice…’
(CO) ‘He can’t return to his car Sir, he’s been clamped…’
(IK) ‘Not really your day is it Mr Blene!’
(Scrobs) ‘Er…O’Blene if you please Officer…’

Immediate update for Philipa: -
I think the jeweller shop you went to, was ‘The Silvermine’ (bottom pic) – or possibly ‘Eaton Jones’, (second bottom pic, gold stuff in window) both on each side of ‘Peggoty’s tea shop which is between the two. The other two shops; ‘Whites’ and ‘Norman Holmes’ are more dressy stuff – very nice, but more formal. Arrazzo is more funky – quite nice though and conveniently close to Waitrose…The lady in ‘The Silvermine’ told me that her manufacturer/designer made special stuff with pearls etc. She wasn’t sure about hedgehogs etc, but there were several silver pieces which had all sorts of small animals etc…and at this point she began to look at me with more than a little suspicion, especially as I asked if I could photograph them…hence the post above ;0)

I'll change it just for you!!!

(thinks...bet he didn't read it at all, just wanted to check the spelling mistakes...hmphhh)

'course I read it - all the way to the bottom, never seen a post so long

liked the pic of the Tenterden Turkish quarter - is Ŏzgűr a mate of yours ?

give my regards to Damian Green

Every time I see the Ozgur sign, I start whistling Woodstock...

Actually, I was slightly pissed when I met Damian Green at The Kent Show a couple of years ago...

I think I was beginning to bore him on the lack of tourist planning in Kent! Not a good subject for Ashford I'm afraid!

Tres amusant! Are you in any way related to that other famous Irishman Mr B. O'Bama?

Now, where are all the people? It looks like you live in a ghost town! (Or was Gordon on a visit?)

Damian is a good guy

This story doesn't ring true: *everyone* has heard of Electro Kevin...

I thought he was going to change his name to Electro Bollocks?

Tenterden is so genteel that it everyone walks around as though they are invisible! Nice place though, I wouldn't mind moving there.

Now Grumps, are you GG, or not?

If you are I've replied already, if you're, not that's a rude word and ladies sometimes visit this site - unless your also Grumpy Granny, in which case you may be GG and I've answered already...

Oooh my first ever girlfriend came from Tenterden - she lived in Milkhouse Cottages. You;ll have to go and take some photos for me!

I've had so many of those "sounding like a crackpot" conversations with people when I try to say what someone has told me in a comment box or on a blog. I haven't tried to have one with the police though.

Scrobs, sorry for the confusion! Grandad here throughout. Apologies for the naughty word. Granny uses it a lot when listening/watching to party pol broadcasts, so it just slipped under the radar. Won't happen again - at least not in these pages!!

Please don't apologise, you can say anything you like - every one else does, that's when they ever get here! (all half dozen that is...). In fact, to make you feel better I'll say a rude word too...

Quite agree about Pol broadcasts as well.

Mrs S and I shriek obscenities at the news every morning and really moan at some of the banal questioning and even worse, the answers; although there are'nt many Nulabyrinthine responses coming out at the moment! I wonder why!

I have a soft spot for the place, as I learnt to play golf there with my Dad, (gave up ten years later though...).

In fact when I went through this week, I actually spotted the hole where I did my very last air shot!

So you can see why I gave up can't you!

Very funny post Scrobs. I thought I had commented already.

Superb! I have in front of me the business card of the Tenterden jeweller I went into with the Tuscana in April, intent on buying her some gew-gaw. Picking out the most expensive ring in the joint (one aims to impress the shopworker classes), the fellow immendiately offered me his loupe - so far so good. I then with a flourish screwed (rather than pushed, I know my James Bond) the damn' thing into my eyesocket - the wrong way round, Opera glasses-style. *rapid retreat in confusion.*

Congrats to the Tuscan for knowing that the word for one of those magnifying thingies is a "loupe". I may add you to my list of Phone a Friends.

I defer in my knowledge of guns to 45 Govt, scrobs. He can spot the safety catch of a Mannlicher in a ironmonger's junkheap at sixty paces.

Morning Idle, I have to confess that 'loupe' was not a word I recognised I'm afraid! I had to retire to my Chambers the other day when someone said they would have to 'resile' from an opportinity too!

I think 45 Govt is great reading over at Guidos etc, I would assume that he prefers sticking it to mendacious malignant politicians than knowing the I've spent a very pleasant half hour in a favourite town, looking in various shops for someone who I'll never ever meet!!!

ps I always have a chuckle at your avatar - TT was a hero of mine!

WOW! Many Thanks, Scrobs. Didn't realise it would be that much trouble but many many thanks. I will do some hunting myself and may even pop by and have a gander - the place looks lovely, lucky you for living in such a delightful part of the world :-)

I am forever in your debt and am willing to bribe judges should the occasion warrant it.

That was a very funny and clever post dear Scrobbles, I do like the way in which you hold your lady bloggers in such high esteem, it's really quite endearing.

It was a pleasure! Absolute heaven of course! I drive through Tenterden so often, and have a really soft spot for the place as well...

Now about Judges...'bribes' thereof etc...there is a small issue which has bothered me (only slightly don't you know...) for a few years; in fact ever since digital photography became poular...ha ha ha...and the 'event' was never going to be seen as more than a - ha ha ha - post prandial reception at the hotel...er...and well, the bubbly bubbled, the fizz fizzed, and well, the camera obviously cammed...

Er, do you happen to know Judge Seymour Krumm-Pet of County Chambers, Maidstone ?...a small chat-ette in his shell-like could 'alleviate'; a certain requirement to attend a ...hearing...ha ha ha...in his office with...ha ha ha...Power Point slides of an 'interesting' nature...

Only if you're coming to Tenterden that is, please don't make a detour (as I wish I hadn't indeed...)

Of course, the reply to Pips mentions you - well of course it has to especially as I had to mention your legs, and of course...ha ha ha...they are 'high on my agenda'!!!

If you think I'm digging too deep here, well, just imagine what its like having all those...ha ha ha pictures on a floppy (not that sort a 'floppy' some may have said...) disk and nobody knows where they are - except a small legal beaver in the 'Cinety Tine - Maidstine...'

(thinks - if one floopy has 1.4 mb of space; how many pictures can fit on one disk and be sent through the post to Inspector Knocker and Constable Onnstable, who will maybe...hmmmmm...)

Mrs S has just seen this and I'm having to go out for a walk with JRT...

this cracked me up...lol...btw often i get up at 3am my time to have time to blog...it's not always night :P

Oh him,noproblem, he's the one that likes catching boiledeggs launched from..... well anyway that'swhat I heard. Laura-li Lubrican is a friend ofa friend. Nay problem. She oils her wossname with germolene,it's a service she likes to provide and it keeps the leather lovely. I Like the smell.